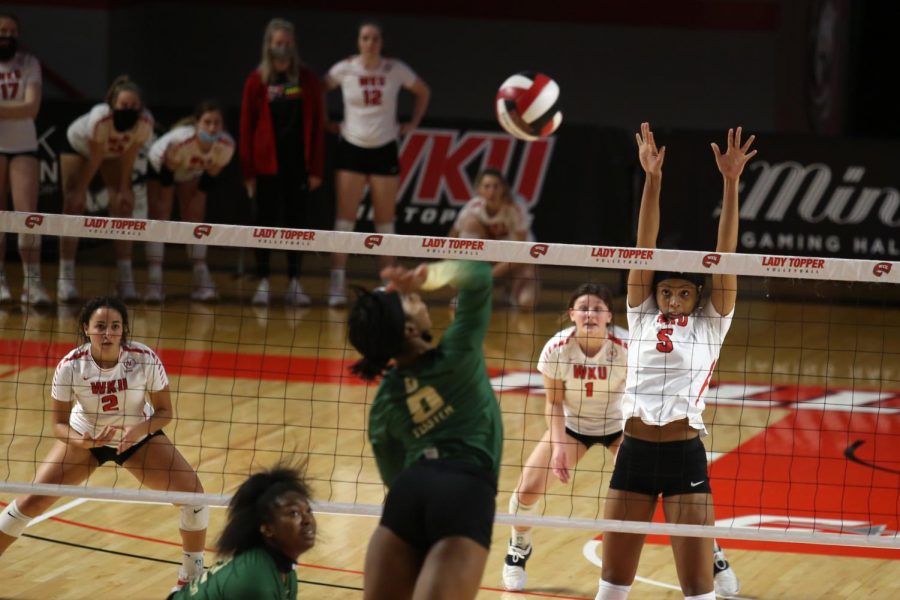 WKU junior middle hitter Lauren Matthews (5) attempts to block an incoming spike during a game against the Charlotte 49ers on February 21, 2021 at the EA Diddle Arena in Bowling Green, Ky., where WKU won 3-0.

This is only the second match the Lady Toppers have played this season where they have not seen a 3-0 sweep.

Identical to yesterday’s match, Marshall was the first team to put points on the scoreboard. WKU’s first point-gaining play of the set was due to a Marshall attack error.

WKU’s first kill of the match was hit by sophomore Avri Davis, and the next play resulted in the first ace of the match by senior Hallie Shelton. As the Lady Toppers tried to catch up to Marshall, Briggs hit two back-to-back kills, bringing the score to 7-8.

Heading towards the end of the set, Marshall saw another three-point lead after a bad set by Matthews. A Hilltopper attack error put Marshall up by four, putting the score at 19-23, a lead the Thundering Herd saw five times throughout set one.

Following the error, the match was paused due to Dieudonne getting injured at the knee and having to get rebandaged on the sidelines.

Dieudonne shot back immediately after getting rebandaged, hitting a kill. Briggs followed this with a kill, assist from Dieudonne.

The largest lead Marshall saw within set one was a five-point lead after a WKU attack error, 19-24. A WKU service error led to a Marshall set win 25-21.

This is only the second set WKU has lost this season, with 11 matches played up to this point. Matthews, the AVCA National Player of the Week last week, had zero kills and five attack errors in nine chances in the set.

WKU was the first to put up points in set two after Briggs hit her seventh kill of the match. The following play was seen as a Marshall attack error, which would have put the Lady Toppers up 2-0 to start the set, but the referees overturned the play and gave the point to Marshall to knot the score at one each.

Immediately after, WKU gained a second point after a kill from Jackson.

The Lady Toppers went on a 6-0 run, which included three kills by Matthews. The streak ended with a kill from Marshall redshirt senior Ciara DeBell.

Two plays later, Ashley Hood hit an ace, putting WKU up 11-7. Another ace hit by Shelton put the Hilltoppers up five points, 13-8, the largest lead the team had seen so far in the match.

Davis hit her fifth kill of the match following her substitution, bringing WKU’s lead to eight. A Marshall attack error then put WKU up nine points.

After a kill by Marshall, Davis fired back with a kill of her own to put WKU back up to a nine-point lead, 22-13.

A big switch from the first set, WKU achieved a 10-point lead following a kill by Matthews, leading to set point. Matthews then led the team to a set win after she hit a kill with an assist by Dieudonne. WKU won set two 25-16, their first set win of the match, with a lead of nine.

A kill by Briggs led WKU to again be the first to put up a point beginning the third set.

The Lady Toppers dominated the court early on after a two-point lead was achieved following a block by Isenbarger and Davis.

After a 3-0 run, the team pushed up to a three-point lead, 10-7. Seven plays later, a Marshall attack error caused WKU to lead by four, and soon thereafter a kill by Davis brought WKU’s lead up to five.

A 4-0 Hilltopper run resulted in a score of 21-14 and a Marshall timeout. After the timeout, Marshall hit a kill, ending the WKU streak.

The Lady Toppers shot back with two back-to-back kills from Briggs. A Marshall attack error resulted in a Hilltopper point, leading the set to setpoint at 24-15. Setpoint lasted three plays.

WKU picked up the third set after a kill by Isenbarger, bringing WKU’s lead to seven to end the set 25-18.

The Lady Toppers began set four dominating the court with a 8-0 scoring run, beginning with a kill by Briggs and ending with a Marshall service error. The streak was broken up by a Marshall kill by junior Sarah Schanck.

WKU saw a 10-point lead after an ace by Shelton, following her substitution into the match. WKU held a 14-4 lead over the Thundering Herd.

Briggs hit three kills in a row, bumping the Lady Toppers’ lead to 11. A bad set by Marshall brought the score to 18-6.

Kills by Davis and Matthews pushed the lead up to 13 and 14 respectively. A kill by Jackson led to match point.

After a 5-0 WKU run and a final Marshall attack error, the team grabbed their third set win of the afternoon at 25-9. WKU kept its undefeated record, now 11-0.

WKU will be facing Florida International University for a home series March 7-8. Both matches will be played at noon CST. Faculty and staff will be able to receive free admission to Monday’s match, and students are able to get into all home volleyball matches for free.