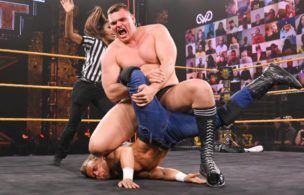 After leaving a path of destruction across the Pond, WALTER, the WWE NXT United Kingdom champion, has returned to American soil. And the 33-year-old Austrian’s first big challenger will be Tommaso Ciampa on NXT TakeOver: Stand & Deliver, a two-night event on April 7 (on USA Network) and April 8 (on Peacock).  First, though you can catch the champ this Wednesday, on NXT’s March 31st episode.

WALTER has held the UK title for a record-breaking two years, so next week, Ciampa will have his work cut out for him. And he isn’t alone: The wrestler leads a group of fellow European talent known as Imperium (Marcel Barthel, Fabian Aichner and Alexander Wolfe). See AlsoAEW’s Brandi Rhodes Talks TNT’s ‘Rhodes to the Top’ — and Becoming a Mom
Plus, the mom-to-be on how it gives her baby a record of what ‘mom and dad were up to while I was in the making.’

Ahead of his NXT matches, Insider chatted with WALTER to preview what to expect, and to talk about his future on the black-and-yellow brand.

WWE just signed a multi-year extension for NXT and announced a move to Tuesday nights on USA Network starting April 13. Plus, NXT UK and other programming is now on Peacock. What kind of impact will all this have in terms of viewership?

WALTER: Even though NXT UK has run for a few years now, it’s still fairly undiscovered by a lot of people. We’re just starting to really get out there. As for NXT on USA Network moving from Wednesday, it makes things a little easier for wrestling fans. You had such momentum last winter before the world shut down. What’s it like to be in the U.S. again to continue what you started?

It’s great to be back after more than a year. Others in Imperium live in the United States whereas I still live in Germany, so we’ve been separated for quite a while.

With WWE running so many events here, are you looking to move to the U.S. full-time down the line?

Most of the guys move here at some point but moving is nothing I plan todo. I’m a little older, so we’re settled at home in Germany. For me, it’s really important to have my base there with family and friends.

So, people are still talking about your match with Ilja Dragunov from last October. What makes it stand out?

Everyone was wondering how wrestling was going to look on TV when there’s no live audience. Is it going to be weird or enjoyable to watch? What added to the match is that I have a physical style, and people are [now] able to hear every little thing. We benefit from that. The match helped get more eyes on the brand. It’s my obligation as champion to get more eyes on the product. What do you make of people comparing you to Brock Lesnar?

It’s nice. Brock Lesnar is a fantastic wrestler, especially when he had that big run with the WWE championship. He was the best wrestler in the world at that point. He is very smart about wrestling and understands it well. Everyone in the ring with him benefits because you have to fight for your life, so getting through him makes them look strong. If there is ever the chance to wrestle him, that would be a match I would really look forward to.

Ciampa also has a physical style. What are you thinking going into the match?

I’m looking forward to it. Tommaso’s very intense — with his body language and when he talks. I think it’s a great match, My favorite matches is when I step in the ring is when I know it’s going to be a struggle. Who do you want to work with next?

Finn Bálor. It was supposed to happen before the pandemic. Hopefully, it’s the next one that can happen for me.