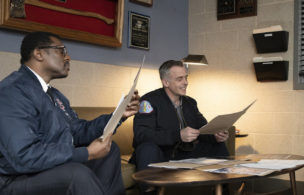 After firefighters Christopher Herrmann (David Eigenberg) and Joe Cruz (Joe Minoso) had that standout call during “My Lucky Day” earlier in Chicago Fire Season 9, who’s the next one from 51 to step up? Look no further than the battalion chief, Wallace Boden (Eamonn Walker) himself.

“Boden hasn’t been out on a call for a while,” Walker told reporters recently. “There is some interesting stuff coming up where he gets, for the first time, to pick up a hose and start working it. He’s normally always telling somebody to do something and Jesse [Spencer] and Taylor [Kinney]‘s characters [Captain Matt Casey and Lieutenant Kelly Severide, respectively] try to call chief an old man, then he gives them what for.” See Also‘Chicago Fire’ Romance Drama: Will Casey Reach Out to Dawson?
The hits just keep on coming for the potential match between firefighter Matt Casey and paramedic Sylvie Brett.

And he enjoys doing scenes like that. “Most of the time Boden doesn’t get to do anything wonderful and exciting and action-hero-y, not as much as David’s character,” Walker continued. “Any time they want to throw me in the mix, I’m ready to go.”

There’s also an upcoming structure fire during which 51 meets “a young, amazing man. It’s a really lovely story that’s relevant to the trials and tribulations of society these days. It’s a significant incident and I’m excited for it to be revealed and to tell the story,” Eigenberg added. “It gets serious, too. It’s heartbreaking. Sometimes in life, mistakes are made, and where do the consequences end and where does humanity begin?”

Firehouse 51 will be answering these and other calls moving forward with a new paramedic in Ambulance 61 with PIC (paramedic-in-charge) Sylvie Brett (Kara Killmer). (Adriyan Rae’s Gianna Mackey couldn’t pass up an opportunity at another house that would lead to her eventually becoming PIC.) But it’s someone viewers already know: firefighter Blake Gallo’s (Alberto Rosende) ex-girlfriend Violet (Hanako Greensmith).

“The fire department has a high turnover,” Walker pointed out, “but you’re going to love her because you’ve already met her. We have taken to her.” We don’t know what her transfer to 51 means for her and Gallo’s future yet.

“There’s always a struggle in trying to find the right roads with somebody,” Eigenberg said. “Herrmann has a tendency sometimes to wonder, ‘Why they can’t just get it together?’ … Herrmann is very resigned and resolved that relationships can be difficult but you just do what you gotta do to get through it. We gotta know who’s going to end up with whom and who might not end up with whom because America wants to know.”

We agree — especially considering the relationships, past and present (and maybe future?), at 51.