‘Shadow and Bone’ Trailer: Can Alina Bring the Light to Save Everyone? (VIDEO) 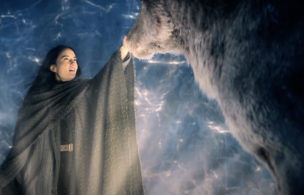 ‘Shadow and Bone’ Trailer: Can Alina Bring the Light to Save Everyone? (VIDEO)

Netflix has officially entered the Grishaverse with the debut of its new trailer for Shadow and Bone. The eight-episode fantasy series drops on April 23.

Based on Leigh Bardugo’s bestselling novels, Shadow and Bone takes viewers to a war-torn world where a lowly soldier and orphan, Alina Starkov (Jessie Mei Li), may be key to saving all of Ravka from “the monstrous threat of the Shadow Fold,” Netflix teases. But as the trailer shows, first, she has to get a hang of her powers as a Sun Summoner while she trains as part of the Grisha, an elite army of magical soldiers. That’s easier said than done. “Bring the light,” Baghra (Zoë Wanamaker) orders her. Alina does, eventually, but not without being punished first.

“Everyone is looking at me like I’m the answer,” Alina says, and that’s because to them, she is. But who she is also makes her quite valuable, and there’s a bounty on her head.

“The only thing more powerful than you or me is the two of us together,” The Darkling/General Kirigan (Ben Barnes) of the Grisha tells her.

Watch the trailer below for more of Alina as well as her with Kirigan and her best friend Malyen Oretsev (Archie Renaux).

“As [Alina] struggles to hone her power, she finds that allies and enemies can be one and the same and that nothing in this lavish world is what it seems,” the logline teases. “There are dangerous forces at play, including a crew of charismatic criminals, and it will take more than magic to survive.”