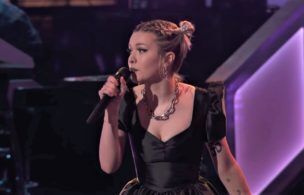 Season 20 of The Voice has officially begun its Battle Rounds, pitting competitors from the same teams against one another for a chance to move onto the Knockouts.

Along with forcing coaches Kelly Clarkson, John Legend, Nick Jonas, and Blake Shelton to make tough decisions, the experts also welcome their advisers aboard for the second tier of the competition. Darren Criss (Team Nick), Brandy (Team Legend), Luis Fonsi (Team Kelly), and Dan + Shay (Team Blake) are more than ready to offer their expertise as the pressure mounts for this season’s hopefuls. Plus, in surprise twist of events, Kelly, who’s not feeling well, gives up her seat to Kelsea Ballerini, though she communicates through video chat and text. It does leave Kelsea, though, to make decisions for the team. Below, see if she made the right choices, and watch the night’s show-stopping Battle performances.

The Team Kelly singers meet with their coach and adviser Luis Fonsi about the Ariana Grande song. They make it their own, leaving a tough choice for stand-in coach Kelsea. Ryleigh ultimately is chosen as the Battle winner. Thankfully, Nick and John both put bids in to steal Gean, allowing him to stay in the competition. In the end, Gean chooses Team Legend.

Blown away by the fact that Dan + Shay are their Battle advisers, Connor and Aaron — also helped by coach Blake — channel that excitement into a grand onstage performance. It’s another tough call, but, in the end, Blake picks Connor and Aaron gets sent home.

Next up is Nick’s powerhouse performers. After receiving guidance from adviser Darren Criss, they tackle Bieber and Grande’s pandemic-era tune with such finesse that the coach is at a loss as to what to do. Ultimately, Dana is the Battle winner, but coach Nick saves Devan, keeping him on the team and in the competition.

As if the pressure isn’t already at an all-time high, Team Legend’s singers are faced with the challenge of performing adviser Brandy’s tune for their Battle. Only one performer comes out alive as John picks Pia and Christine is sent home.

After some help from adviser Darren Criss, the Team Nick performers deliver a soulful rendition of Lauren Daigle’s song for the coaches. Jose moves on and, sadly, Awari is sent packing.

Blake’s country crooners take some guidance from Dan + Shay before hitting the stage for their Battle. Ultimately, Blake chooses Ethan as the winner, but Kelsea steals Avery for Team Kelly, allowing both performers to continue on their journeys.