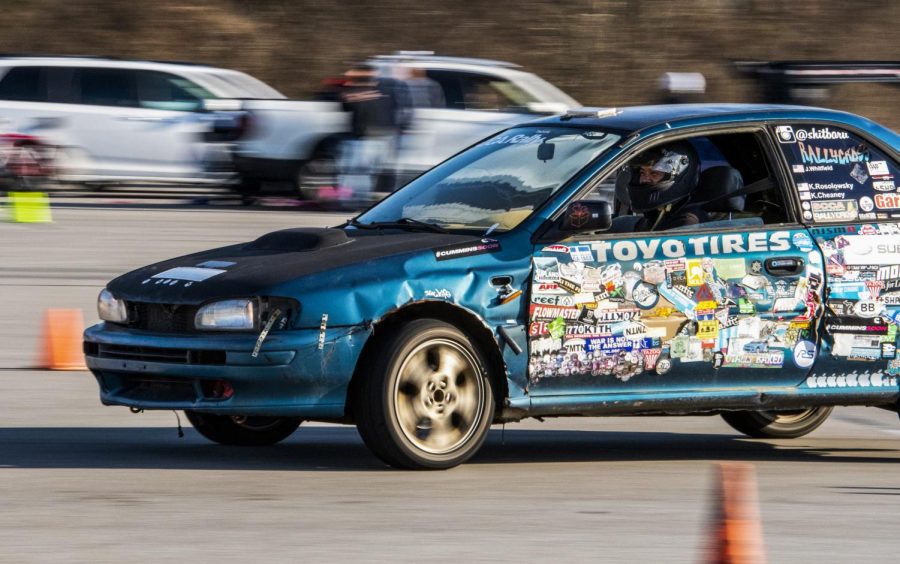 A driver finishes their auto-crossing run at the National Corvette Museum Motorsports Park during the King of the Heap race event on March 6.

As the smell of gas and the sound of screeching tires fills the air, beat up cars – all valued at $1,000 or less – lined up as they waited to participate in the King of the Heap at the National Corvette Museum Motorsports Park on March 6. Several cars tore around the track where a small crowd waited to watch. Drivers chatted with friends while conducting last-minute tune ups. As races were about to begin, some even pushed their cars to the starting line of the track. There was a separate line across the lot for the auto crossing races, where cars sped through a course of turns and short straightaways outlined with safety cones.

Some drivers take a passenger on their ride or have cameras set up securely to capture their drive. An audience waits in a line by the start and finish, some previous competitors holding their helmets by their sides as they watch. Once a driver completes the short course, the car gets back in line to go through the course again or the driver switches. People riding bikes and scooters weave around the lot between families who’ve set up chairs or tents with food on trailers to watch the events. As the day of racing comes to an end, the cars are secured onto trailers and the groups begin their trips home.