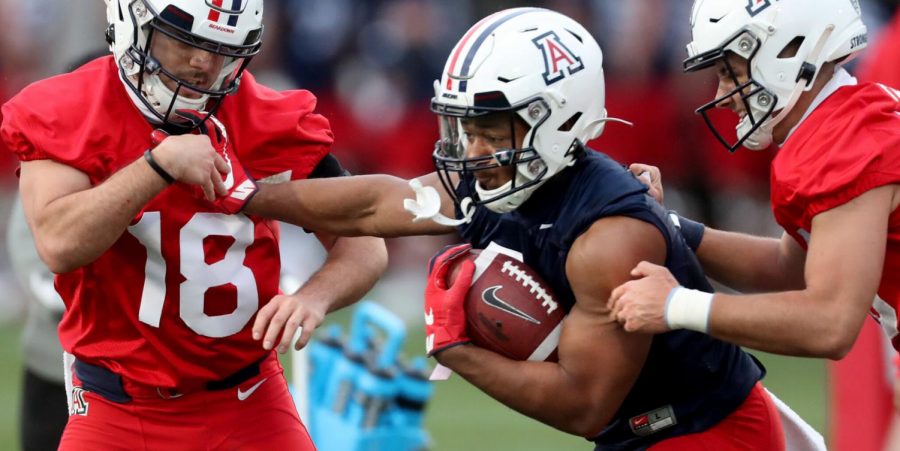 Running back Jalen John shoves his way through Nick Moore, left, and Cameron Fietz during a ball protection drill on the first day of spring practice for the University of Arizona, Tucson, Ariz., March 23, 2021.

The Arizona Wildcats returned to the practice field Tuesday to begin their second week of workouts under Jedd Fisch. Here are some notes and takeaways from spring practice No. 4:

* The defensive line had a big day against a shuffled offensive line. Several defenders were credited with sacks, including Issaiah Johnson and Trevon Mason on back-to-back plays.

* Nahe Sulunga, who’s had a strong camp, shared first-team reps with JB Brown. Sulunga had a pass breakup. Brown had a sack.

* The offensive line had a new look with Donovan Laie unavailable after he got banged up toward the end of Saturday’s practice. Josh McCauley and Josh Baker alternated between center and guard, and Sam Langi moved up to the first unit.

* Young running backs Jalen John and Stevie Rocker Jr. got a lot of reps behind Drake Anderson with Michael Wiley working on the side. Both had long runs during 11-on-11 play. John displayed good power on a short touchdown run up the middle. Rocker’s run fired up the offense on the sideline.

* Brian Casteel made a highlight play against Isaiah Rutherford, snagging a back-shoulder throw from Gunner Cruz down the right sideline. Rutherford got his revenge later, intercepting Cruz when Casteel slipped on his route.

* Safety Gunner Maldonado was among the players who did not participate.