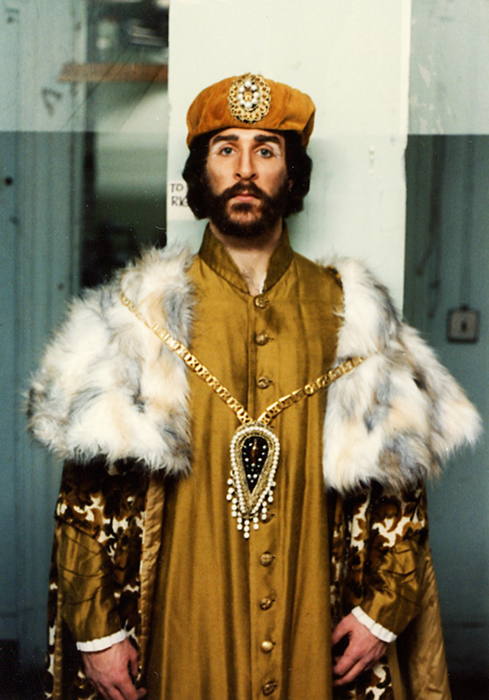 Geology Associate Professor Andrew Wulff is dressed as the Duke in “Romeo and Juliet” for the Baltimore Opera Company in 1986.

Andrew Wulff is a Geology professor at WKU, but he is also a man of many talents.

Beyond academics, Wulff has been singing nearly all his life. He began taking voice lessons in high school at the Peabody Conservatory

“I sang rock ‘n’ roll in high school. I was in a couple bands in college, and actually that’s what got me into Opera because I was afraid I’d lose my voice from doing all the Led Zeppelin,” Wulff said.

Wulff has been teaching at WKU since 2002, but his teaching endeavors long before. He came to WKU from the University of Iowa after serving as Geology Department Chairman at Whittier College in Los Angeles, a total of 25 years of teaching experience.

His research concerns the petrogenetic history of volcanic rocks in the Andes and Mojave Desert. He serves as an Undergraduate Honors student advisor and he is active in training workshops for pre and current Earth Science teachers.

His travels for Geology have taken him to Chilean Andes, Java (in Indonesia), southern New Mexico, Wyoming, Tushar Mountains in central Utah and Idaho, the Mojave Desert and Italy.

Throughout teaching and traveling, his love for music has always been with him.

He graduated from Oberlin College in 1980 and quickly began with the Maryland Geological Survey all the while singing both in college and in concerts.

After graduating from college, he moved to Baltimore and auditioned for the Washington Opera and the Baltimore Opera.

From there he participated in some international competitions which opened a lot of European venues up to him. Wulff lived in Italy, Germany, and outside Paris while he was singing mostly in Europe and South America.

Wulff speaks five languages and has a grasp on at least two more. He speaks French, German, Italian, Spanish, Russian, and Bulgarian, along with some knowledge of Latin and Javanese. He is currently learning Arabic for some of his students.

Wulff said preparing for opera requires him to “take eight weeks off” so he mostly sings classics, like Bach or Handel, some Jazz and Rock and Roll.

While Wulff has quite a background in singing he is focused on teaching Geology and is not part of the voice faculty here at WKU.

Wulff said in the Geology Department, they stress the development of the whole person. Other things that students are doing should not be abandoned.

“If you do other things, you should keep doing other things,” Wulff said. “You don’t put aside any of those things, but your focus is on Geology.”

Wulff has taken this to heart. Wulff opts not to own a TV and keep an old phone so he has time to devote to other things like learning instruments. He knows how to play guitar, bass, trumpet and piano.

He is also the faculty advisor for the men and women’s Lacrosse here at WKU, and has also been the coach for the girl’s Lacrosse team at Bowling Green team. In addition to that he has also coached at the junior high level.