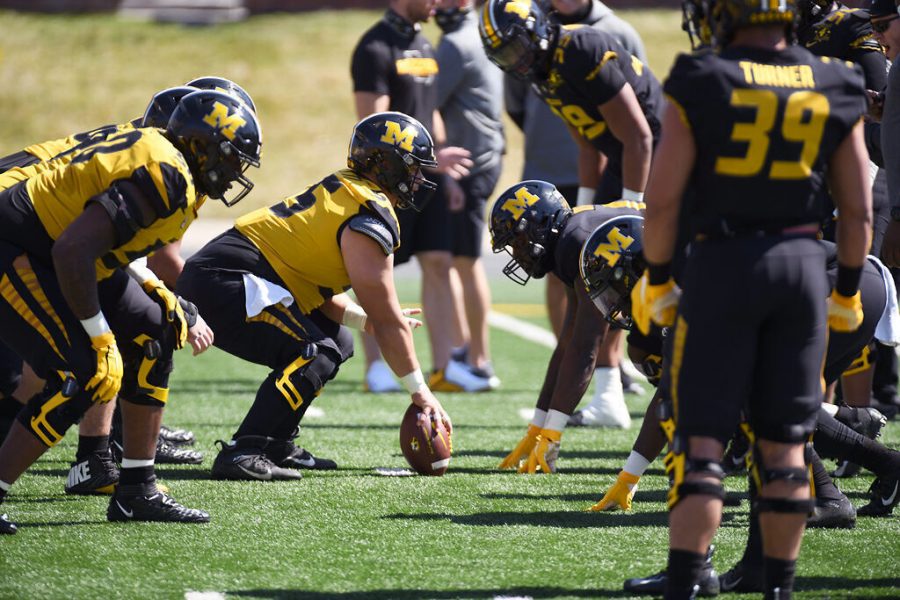 Offensive lineman Michael Maietti prepares to snap the ball during a drill Saturday at Faurot Field prior to MU’s Black and Gold Spring Game.

Spring practice is over, and Missouri football is one step closer to the beginning of the 2021 season. With no shortage of storylines and plenty of time until September, the Missourian football writers took a look at the state of the team.

Who stood out the most this spring?

Emily Leiker: I think Mookie Cooper stood out the most, but another standout I think should be getting more attention is sophomore running back Elijah Young.

He split first-string reps with senior Tyler Badie in the Black and Gold Game, meaning coach Eliah Drinkwitz is probably planning to utilize the pair similarly to how Larry Rountree III and Badie were in years past.

Young never rushed more than four times in a game (and he only did that once) and only amassed 78 yards in 2020, but those numbers are likely to be much higher this season.

Wilson Moore: In the sections of practice open to media this spring, defensive tackle Realus George Jr. was one of the best players on defense. He had several tackles for loss in the spring game and figures to see the field next to Kobie Whiteside on the interior of the line this fall.

“Spring is usually a struggle period for those junior college players because of the tempo, the amount of reps, the intensity, the detail with which we practice,” Drinkwitz said. “But if they (George and defensive end Daniel Robledo) can absorb it and utilize the next four months to improve, they’ll put themselves in a position to help us in the fall.”

Calum McAndrew: Mookie Cooper and Dominic Lovett are both solid candidates for this question, but I’m opting for Shawn Robinson here. In what will be his first full year at a new position, everyone who has mentioned Robinson throughout the spring has been massively impressed with his work ethic and progress in the spring — not least Drinkwitz.

“I made a cut up for the team about the way Shawn practices compared to everybody else, and if our whole team would practice the way Shawn Robinson is practicing right now, with urgency, intensity and great focus on detail, we’ll be a championship football team,” Drinkwitz said March 5.

What storyline(s) should fans expect this fall?

EL: Four of MU’s matchups this season are either first-timers — Central Michigan and Boston College — or first-time-in-a-long-timers — North Texas and Texas A&M.

The Tigers and the Mean Green last met in 1995, and MU faced off against the Aggies in 2014. It should be fun for fans to see Missouri play against different talent than they’re used to.

WM: How Badie steps into the role of running back No. 1 is intriguing to me. He’s more versatile and a better receiver than Rountree, but so much of what Rountree provided was between the tackles and at the goal line, for which Badie isn’t as well-suited. Badie said the plan wasn’t to change the scheme or blocking around him, so we’ll see how well he replicates Rountree’s production.

Young seems to have the inside track on getting the rest of the running back snaps, but Simi Bakare and Dawson Downing could see time as well.

CM: I’m immensely intrigued by defensive coordinator Steve Wilks’ switch to zone coverage and the congruent goal to lead the Southeastern Conference in defensive scoring. I’m fascinated, but dubious that this is attainable.

Missouri was 13th in the SEC last season in interceptions, tied for eighth in total interceptions for touchdowns and no player managed more than one pick. It’s a long way to the top.

EL: Boston College. It will be the first matchup for the Tigers and the Eagles, who have historically been pretty similar stats-wise (take a look at their Winsipedia matchup page). Like Drinkwitz, Eagles coach Jeff Hafley will be in his second year. It’s also the game for which Missouri will travel furthest, making the trip all the way out to Alumni Stadium in Chestnut Hill, Massachusetts.

WM: Missouri has lost its last two games apiece against Florida and Georgia, getting outscored 140-37 in the process. Just being competitive against either of those teams next season would be an undeniable step forward.

Drinkwitz’s goal is an SEC East championship, but no one has come particularly close to unseating the Bulldogs or Gators as the class of the division since 2018. Both face the Tigers late next season, and it will be a measuring stick of how far the Tigers have come in Year 2 under Drinkwitz.

CM: Florida. Give me the chaos of Dan Mullen igniting royal rumbles, but bring it to Columbia. The Gators will be one of the best teams (if not the best team) Missouri faces in the fall. Add a little bit of drama to the mix, and I’m all in.

The Tigers have never lost three in a row to the Gators, and they enter this matchup with 41-17 and 23-6 losses in their two previous encounters. The Nov. 20 game is the second-to-last on Missouri’s schedule, and if things have gone well up to that point, it could very well be its most important game of 2021.

EL: I touched on this very briefly in the Missourian’s first football mailbag of 2021, but I think the lack of depth at O-line is worrisome.

While practicing with the second- and third-string linemen, quarterbacks Brady Cook and Tyler Macon were repeatedly forced out of the pocket. The first-string group appears strong, but Tiger fans should be sending up prayers that those players don’t get injured.

WM: The linebackers without Nick Bolton could be an issue. Devin Nicholson is coming off a solid season, and the coaching staff is high on Chad Bailey. But this is a defense that gave up 35 points or more six times in 2020, and this could still be the weakest unit in Steve Wilks’ first year as defensive coordinator.

CM: Depth in the quarterback room. Missouri is one Bazelak injury away from playing Brady Cook or freshman Tyler Macon. That ought to be concerning for Tigers fans. If I were Drinkwitz, I’d have Bazelak in bubble wrap for the remainder of the offseason.

EL: This is more a prediction of what the biggest improvement will be by the time the 2021 season kicks off, but I think it will be Missouri’s red zone offense.

There’s still a lot of work for Bazelak to do on connecting with the wide receivers, but I think that’ll be a priority in the offseason and we’ll see improvement come fall.

WM: The receiving corps has been a question mark since 2019, but last season was a step forward.

Keke Chism emerged as a reliable option in the second half of the season, and Jalen Knox set a career high in receptions playing from the slot after two inefficient years running deep routes.

Newcomers Cooper and Lovett both were four-star recruits who have impressed this spring, giving Bazelak even more weapons and more ways to stretch defenses.

CM: I’m torn between Chism and Tauskie Dove on this one. They both look like they’ve kicked it up a notch with the arrival of Cooper and Lovett.

Chism looks like he has an extra half-yard off the mark, and Dove looks like a potent deep threat. Having an abundance of solid receivers is certainly a good problem to have as the Tigers go in search of a better year in the red zone.

The Tiger defense outperformed its offense on most occasions this spring, which was a bit of a surprise considering all the staffing and scheme changes. Franklin, Wilks and secondary coach Aaron Fletcher seem to be fitting in well with the team.

WM: With the departures of Ryan Walters, Brick Haley and David Gibbs, the coaching staff is now entirely made up of Drinkwitz hires. Drinkwitz is an offensive-minded coach, but having a hand-picked defensive staff and a more normal season should bring more light to Drinkwitz’s vision.

CM: It’s very difficult to glean anything significant from spring training, but from what we’ve seen, the new crew seems to be settling in well — especially Wilks and Fletcher. Safety Shawn Robinson is certainly impressed.

“Coach Wilks and the new coaches, Coach Fletcher, Coach Harbison, they’ve been awesome,” Robinson said. “Just been very patient with me, and also very hard on me, but just pushing me and teaching me the things that I need to know. Very detailed and critical.”

EL: 8-4 and third in the SEC East. I think the Tigers will win their first four games and add some losses mid-season.

WM: This is hard. I see seven to eight games where it would be reasonable to expect a Missouri win. Recent history also says the Tigers will lose one of those games they’re expected to win.

I’ll say they go 7-5, No. 3 in the SEC East. There’s still a sizable gap between Missouri and the top teams in the conference, but this season is a chance to take a step forward.

CM: 7-5, No. 3 in the SEC East. Losses to Georgia, Florida, Texas A&M, Tennessee and one random team that Missouri should not lose to. Not sure which one.

I’d lean closer to 6-6 than I would 8-4, but I do genuinely believe the Tigers have made progress under Drinkwitz, thus the above-.500 prediction.