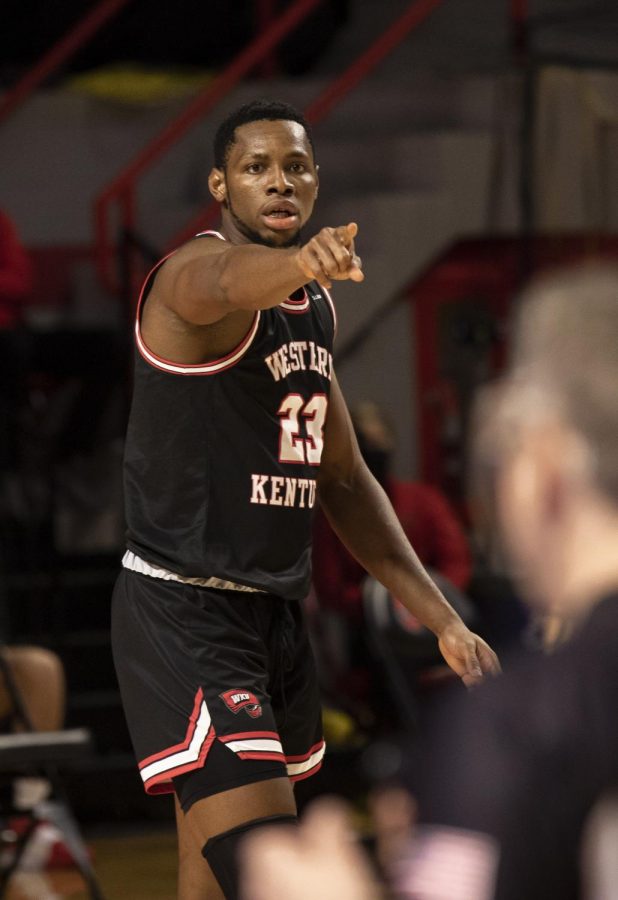 Junior Charles Bassey pointing to a teammate on Jan. 9, 2021 when WKU played LA Tech. The Hilltoppers lost 63-58 to the Bulldogs to split the weekend series.

Prior to tonight’s game at No. 12 Houston junior Charles Bassey was named a semi-finalist for the Naismith Defensive Player of the Year Award.

Bassey currently ranks fifth in nation in rebounds per game with 8.44 and then third in the nation with 3.22 blocks per game.

The 6-foot-11 big man also has 12 double-doubles this season heading into Wednesday’s game against the Cougars.

Bassey is averaging 18 points, 11.7 rebounds and 3.2 blocks per game while shooting 61% from the field. The only players in the nation to finish a season with those averages since at least 1992 were Tim Duncan, Chris Kaman and Carlos Rogers.

In four games against West Virginia, Louisville, Alabama and Memphis this season Bassey has averaged 19 points, 12 rebounds and 3 blocks. Now the center will turn his focus on Houston tonight.

Bassey has been named Conference USA player of the week six times this season, tying former Cincinnati star and longtime NBA pro Kenyon Martin for the league record for most in a single season.