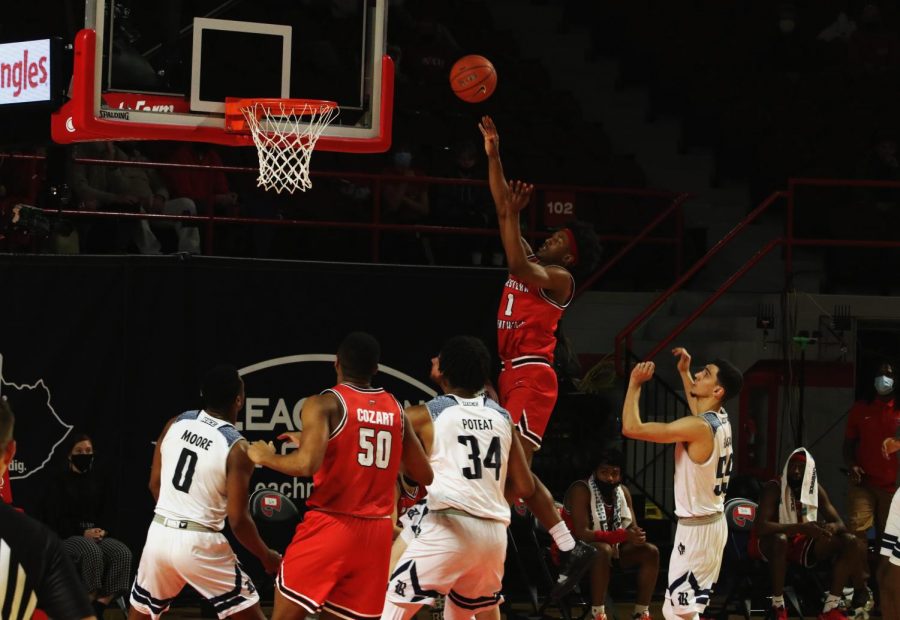 WKU freshman Kylen Milton (1) attempts a shot during the game against the Rice Owls on Feb. 13, 2021 in Diddle Arena.

The Hilltoppers looked to have made the correct adjustments in the hours between games as there was nothing Rice could do to slow down WKU’s offense.

“There’s no question about it,” head coach Rick Stansbury said when asked if this was the most complete series his team has played all season. “Offensively and defensively we’re really efficient.”

Rice couldn’t seem to find an answer for junior Charles Bassey, who shot 9-of-10 from the floor for a total of 21 points. The big man was unable to grab his 13th double-double of the year but still terrorized Rice’s defense all the same.

“I think in those 19 days we worked,” redshirt junior Luke Frampton said. “We didn’t sit around and do nothing. We had to come in and work and compete and still put the work in so we could come out and play hard. I think it showed over those 19 days we got in the gym and got a lot shots up.”

Frampton made five threes in an impressive shooting performance and freshman Dayvion McKnight dished out nine assists and put up eight points in a solid showing for the young guard. Senior Taveion Hollingsworth also had himself a great night, scoring 16 on 6-of-11 shooting and contributed seven assists.

Bassey won the tip and scored WKU’s first points of the game. Hollingsworth continued to show his ability from deep, hitting a wide open three to open his night. Rice sophomore Travis Evee scored first for the Owls, but a quick three from WKU senior Carson Williams put the Hilltoppers up 8-3.

WKU pressured Rice well in the paint, forcing them to take more shots from beyond the arc and shave time off the shot clock. The Hilltoppers also seemed to have adjusted to Rice’s zone defense as they were able to attack the rim more efficiently than on Friday night.

Bassey put down a nasty dunk at the 14:24 mark to make things 12-10 in favor of WKU after Rice had managed a few fast break scores. Freshman Dayvion McKnight picked up his first points of the game off of a wide open three followed by a layup on the next possession to put the Hilltoppers up 19-14.

Rice sophomore Max Fielder looked to be a problem early for WKU as he was able to use his 6-foot-10 frame to tip in errant shots. Rice entered a stretch of 4-of-5 shooting before WKU redshirt senior Kenny Cooper put in a layup to extend the lead to 24-19.

Bassey seemed to glide to the rim to tip in a missed shot by teammate McKnight, showing off his impressive athleticism to the crowd in Diddle Arena. Frampton consistently got open looks, drilling his second three of the game at the 4:27 mark to make the score 32-26.

McKnight put a stop to a Rice fast break by stripping the ball away, passing to Bassey on the other end of the court for a monstrous slam. The Hilltoppers then opened up a 14-2 offensive run over the final 4:27 of the half to make the score 43-28 entering halftime.

“He never got sped up,” Coach Stansbury said when talking about McKnight’s performance. “Sometimes the pressure of the man will speed you up. He’s always in attack mode.”

WKU entered the break with only five turnovers to Rice’s 11. The Hilltoppers played a much more physical game of basketball than the night before, forcing Rice to make mistakes.

Once the game resumed WKU continued to play physically in the paint, relying on Bassey and Williams to keep Rice at bay. Williams recorded a flashy block on Rice sophomore Riley Abercrombie with 16:25 to play to keep WKU squarely in the driver’s seat.

Bassey drilled a three to bring him to 20 points on the night and to extend the lead to 52-41. Frampton hit two threes in a row to tack on another six for the Hilltoppers. Frampton would end the night 5-of-9 from deep with all of his points coming from three pointers. It seemed like all of the Hilltoppers were shooting the three efficiently, as Williams finished the night a perfect 2-of-2 from beyond the arc as well.

“Sometimes you get into that zone where you feel like you’re shooting into an ocean, and anytime you throw it up it’s going in,” Frampton said. “I was happy to hit shots when I was and it helped us get the win.”

The Hilltoppers tore through a 12-0 offensive run to make things 71-47, drilling three triples in a row to pull away from the Owls. One of those shots came from sophomore Jordan Rawls, who was seen on the sideline Friday night but didn’t see any minutes.

Williams put the whole crowd on its feet with 7:47 to go after a stellar break-away dunk that extended the Hilltoppers lead to 21 points. Hollingsworth charged into the paint to pick up the and-one to make things 75-57.

The WKU sidelines were full of action as the bench jumped up and down encouraging their teammates on the floor. The Hilltoppers looked like they knew they were firing on all cylinders and were enjoying every bit of it.

“This arena, even though COVID is going on, it’s still the best place to play,” McKnight said.

Rice failed to get anything going in the final few minutes, taking multiple desperation threes and missing passes in the paint. The Hilltoppers slowed down the tempo and rode the rest of the game out comfortably for the 89-66 victory, taking a bevy of threes as the clock wound down.

Coach Stansbury emphasized that the events at the end of the game should not have any effect on WKU’s next slate of games.

Next up the Hilltoppers travel to Denton, Texas for its next series against North Texas (12-6), (8-2, C-USA). The Mean Green swept its series this weekend against Southern Miss.