Hudson picks up win No. 650, WKU claims game one over Charlotte 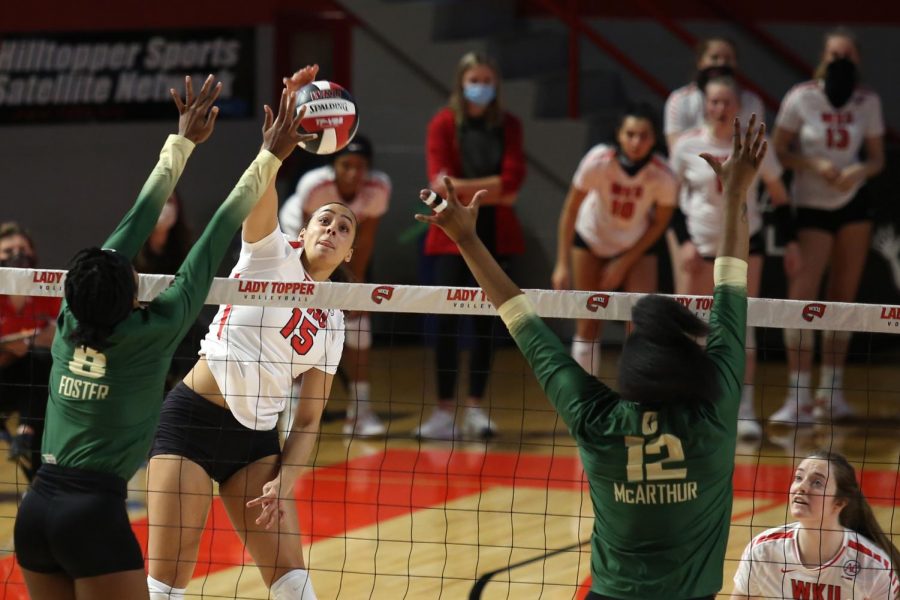 WKU senior Outside Hitter Kayland Jackson spikes the ball during a game against the University of North Carolina at Charlotte 49ers on February 21, 2021 in Diddle Arena. WKU won 3-0.

Head coach Travis Hudson picked up win No. 650 today over Charlotte. He is one of 15 active coaches in the nation with as many wins all-time.

“To be honest, it’s hard to believe,” Hudson said. “I’m just here trying to do the best job with our players every day and I’m not worried about people thinking I’m one of the best in country or best.”

Senior Nadia Dieudonne said postgame the team is going to keep going to see how many more wins they can grab for their coach.

“I think it’s a cool milestone that he set and that we’re a part of that,” junior middle hitter Lauren Matthews said postgame Sunday.

The Lady Toppers had a rough start to today’s match against the 49ers. WKU was able to rally and came back to sweep Charlotte 3-0 in the first match of this week’s series.

This brings the Lady Toppers winning streak against the 49ers to 12. The last time the two teams faced each other was in the 2019 season, with WKU sweeping Charlotte 3-0 in that match as well.

Matthews hit 14 kills throughout the match, adding up to a little under one-third of the team’s whole kill count. Sophomore outside hitter Paige Briggs gathered up the second-most kills of the match, coming in at nine, as well as carrying a .421 hitting percentage.

A kill by senior outside hitter Kayland Jackson put the Lady Toppers on the scoreboard after allowing four consecutive points from Charlotte to start off the match.

“It was obviously a slow start for us,” Dieudonne said. “We tried to communicate as well as listen and that kind of showed how we did for the rest of the match.”

Charlotte outside hitter Emani’ Foster hit two kills amid the 49ers lead at the beginning of the first set. She was one of the 49er’s highest point-getters at 10 points, as well as coming in with the team’s most kills, nine. Amani McArthur, 6’3 middle blocker for Charlotte also put up 10 points for her team.

Two big plays were played back-to-back, a block by Jackson and WKU’s first ace of the match by sophomore outside hitter Paige Briggs, tying WKU and Charlotte 8-8 for the first time in the match.

A kill by Avri Davis put the Lady Toppers up one point for the first time in set one, 9-8.

A second tied score occurred at 15-15, with a kill by junior Katie Isenbarger. WKU then picked up two more points, putting them up by two for the first time in the match, with a block by Dieudonne and an ace by senior Logan Kael.

Isenbarger blocked a Charlotte ball, putting the Lady Toppers up by 5 in the first set.

WKU went from being down four points during their lowest point of the match to being up by seven at their highest point.

The Lady Toppers emerged from the first set with a seven-point victory 25-18, their highest lead of the set.

WKU put up the first point of the second set, an attack error, and its next point off of a kill from Matthews.

“I just took it as a personal challenge, and just had to play through it,” Matthews said regarding the team’s imperfect start in Sunday’s match. “Can’t give up, like I can’t let my teammates down. If I’m down and showing that then that’ll bring them down and we can’t have that. So, stay positive.”

Briggs hit back-to-back aces against the 49ers bringing WKU’s lead up 12-7 in the second set.

A kill by Matthews prevented a tie, bringing the score to 17-15, Lady Toppers continuing their lead of the set.

Charlotte took their first timeout of the set after a kill by Matthews. Soon after, the teams were tied for the second and third times throughout the second set after two kills by 49er McArthur at 22-22 and 23-23.

Two kills by Matthews put the Lady Toppers up to setpoint twice at the end of the second set. A Charlotte attack error let WKU grab another set win, 26-24.

WKU put the first point on the scoreboard in the third and final set of the match, an attack error by Charlotte’s Foster.

Matthews blocked two Charlotte balls keeping the Lady Toppers lead at the beginning of the set.

A kill by Isenbarger coming from an assist by Dieudonne broke the 6-6 tie between the two teams. WKU did not let up, and only tied or led throughout the third set.

Matthews hit her second out of four kills of the set, putting the Lady Toppers up three points 10-7. A Charlotte timeout followed this play.

Dieudonne hit her second kill of the match, raising WKU’s lead 13-9. Six plays later she assisted a kill by Jackson, putting WKU up six points, the highest lead of the third set up to that point, 16-10.

The team’s highest lead in set three was nine when the scoreboard read 23-14.

“I never really thought we were going to lose,” Dieudonne said. “We were struggling and that’s something that we have in our team is a lot of trust that we’re not doing our best but we’re still gonna do just enough. I stay confident because I just know everyone’s gonna work hard, and they’re gonna try and do their best in every ball.”

A kill performed by Matthews brought the Lady Toppers to setpoint in the third set. Kael then hit an ace in the next play, bringing home the third set for WKU 25-17.

WKU will face Charlotte again tomorrow, Monday, Feb. 22. The match is slated to begin at noon.

“We expect Charlotte to come out really great tomorrow,” Dieudonne said. “They can make adjustments to what we did and it’s going to be hard for us to see what we did wrong and just be ready for anything coming at us.”

Hudson said the point of emphasis for tomorrow’s match is trying to defense at a higher level.