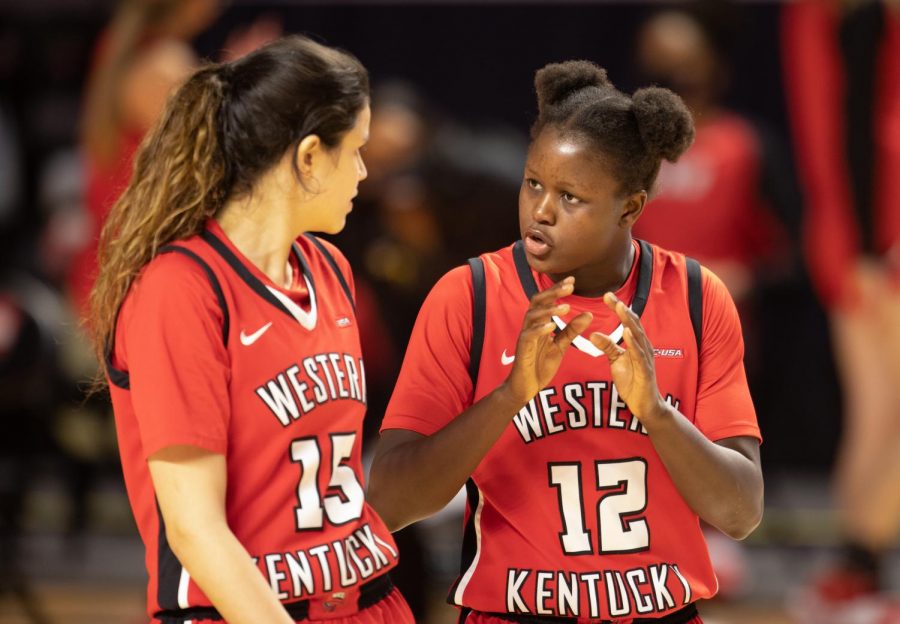 WKU came out on top 66-56 over the Lady Panthers to snap a three-game losing streak.

“I was really happy with the focus that this group had on the floor tonight,” WKU head coach Greg Collins said. “Overall, I thought we really did a good job.”

WKU senior Fatou Pouye had quite the performance, dropping 23 points and seven rebounds to break her previous career high of 21 points.

“She was open,” Collins said about Pouye’s performance. “Fatou’s a good shooter and the difference between her scoring and not scoring is not getting her involved in the offense, it’s her pulling the trigger.”

The opening tip off went to FIU, but junior Alma Danielsson turned the ball over. At 8:37, graduate Ekpiteta Emerald knocked down the first shot of the game. Junior Meral Abdelgawad hit a three pointer to give WKU a 3-2 lead.

The Lady Toppers had an explosive first frame of play, causing eight turnovers and led the Panthers 18-9 by the end of the first frame.

FIU made adjustments going into the second frame, making it a four-point game when senior Kyla Nelson put another two points on the board after drilling a three pointer. A few moments later, Elgedawy drew a foul and made the layup to go to the line. Elgedawy converted the three-point play extending WKU’s lead to 21-14.

With 6:11 left in the first half, WKU led by eight points as Pouye was unstoppable with 15 points. Pouye was also five of her last five before the break. At 3:48, both teams had been on scoring droughts. With 3:10 remaining, WKU managed to break the drought as Abdelgawad would make a layup off another FIU turnover.

However, by 1:09, FIU started to come back. Sophomore Fujika Nimmo made a layup to make it a two-point game. Nimmo knocked down a three with 45 seconds left on the clock to give FIU the advantage and an 11-0 run. This put FIU up 33-32 over WKU.

“Bad shots,” Collins said. “That’s what allowed them to take a lead at halftime.”

Elgedawy had a surprisingly quiet first two frames as she had three points by halftime.

At the start of the third quarter, Haywood hit a shot to give WKU a one-point lead. Elgedawy made a layup to extend the lead to six over FIU, but it would not last. FIU graduate Jiselle Thomas would make back-to-back layups to give FIU a 37-36 advantage over the Lady Toppers.

By 5:03, WKU had a one-point lead over FIU after Elgedawy hit a jumper. FIU couldn’t make shots while they were 0-of-5 from the field. At the end of the third frame, FIU pressured WKU on offense and took a 45-43 lead.

With 3:21 left in the fourth, Pouye had practically solidified the victory with another three pointer to give WKU a 10 point advantage. The Lady Toppers would stay in the lead to take down the Panthers in game one with a 66-56 win.

“This week, we’ve really focused on working on our defense,” Pouye said. “We realize in order to win the game, we have to stop them from making shots.”

The Lady Toppers will return to FIU Arena tomorrow at 3 p.m.