Hilltoppers off to Boca Raton for matchup against FAU 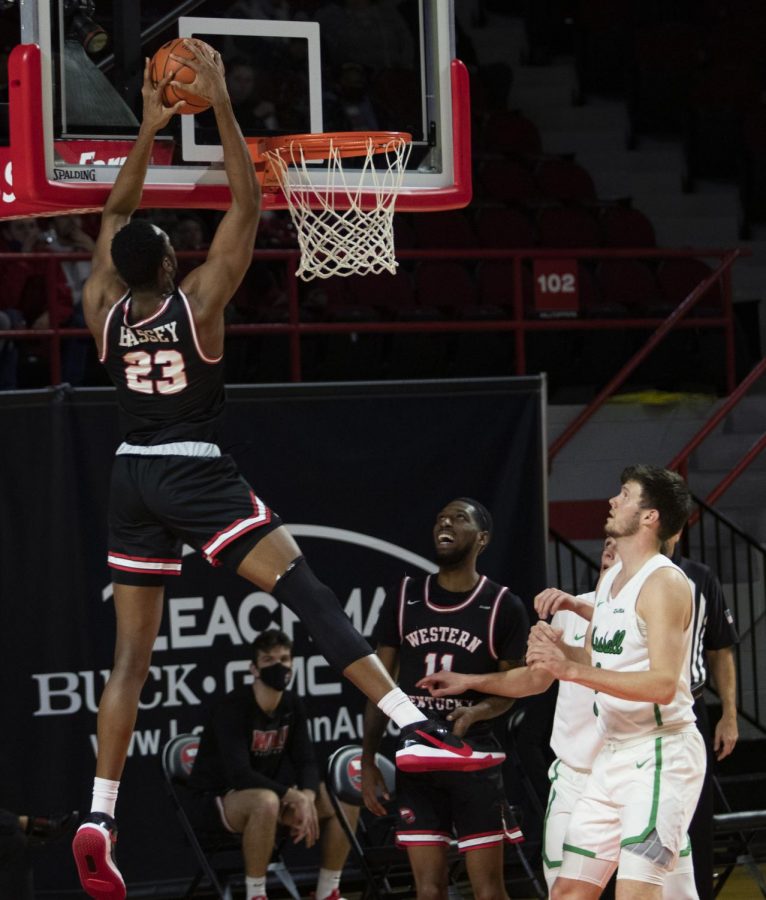 The WKU men’s basketball team will take the floor, for the first time since Jan. 24, to take on conference foe Florida Atlantic University Friday at 6 p.m.

Last week, the Hilltoppers were supposed to take on Old Dominion but were unable to due to multiple positive COVID-19 cases within ODU’s men’s and women’s basketball programs.

WKU has played its full slate of non-conference matchups, so it was not likely an opponent would have been found to replace the Monarchs on the schedule.

Conference USA has placed an open week at the end of the season that holds the purpose of making up games that were postponed, which is when WKU will most likely play ODU.

The Hilltoppers will now head on the road to take on the Owls.

FAU is currently (8-7), (3-3, C-USA) and have won three of its last four games. The Owls haven’t played since Jan. 23, splitting its series with Charlotte and currently sit in fourth place in the East Division of C-USA.

FAU was supposed to take on Marshall on the road this past weekend, but the games were unable to be played due to contact tracing related to a Tier I member of the FAU travel party. The Owls have had four games postponed this season, the first set being conference opponent Middle Tennessee State.

The last time WKU and FAU squared off, it ended in a 69-65 victory for the Owls.

Only three Hilltoppers scored in the double digits, including two members of this year’s roster. Juniors, now seniors, Josh Anderson led the way with 20 points on 7-of-13 shooting with four rebounds, while Taveion Hollingsworth had 18 points, four re- bounds and three assists.

This season, Ingram leads the Owls in shooting — once again, averaging 14.5 points, 6.1 rebounds and shooting 49% from behind the arc.

Junior Michael Forrest and sophomore Braylen Greenlee are the two other players who average double-digit points a game. Greenlee leads the team in assists per game as well.

FAU is a scoring machine, currently scoring 80 points per game, the most in the conference, while winning by an average of 14 points. The Owls have the second best shooting percentage in the league, shooting 47% per game while also shooting the second best from behind the arc at 38%.

The Owls are a top five defensive team, only allowing its opponents to shoot 41% and only allowing teams to score 66 points a game.

Where FAU struggles is on the perimeter, as they are 11th in the conference in three-point field goal percentage defense. With the way WKU has been shooting the past few games, that is an area they can focus on when attacking on offense.

Last year, the lack of depth played a huge factor in this matchup. Obviously, with junior Charles Bassey in the lineup this time, the outcome will be greatly affected by his play.

These two teams are number one and two in rebound margin, with FAU having a two rebound advantage over the Hilltoppers. Whoever can gain control of the boards should have the advantage in both games.

The series will be held at Abessinio Court at FAU Arena in Boca Raton, Florida. Game one is on Friday at 6 p.m. with game two on Saturday starting at 3 p.m. Both games will be broadcasted on ESPN+.