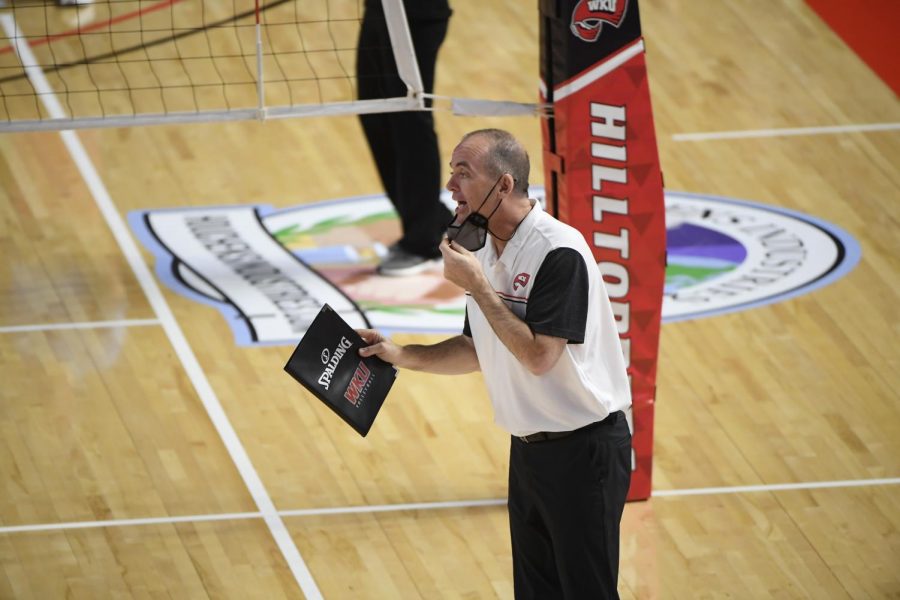 Lady Topper head coach Travis Hudson communicating with his players on the court during the season's first Conference USA match against FAU on Feb. 7, 2021.

“Before every match, I tell them to go have fun today,” head coach Travis Hudson said. “It could look very different tomorrow or next week. Let’s go play with joy in our hearts and with smiles on our faces.”

“Florida Atlantic is a really young team,” Hudson said. “There is talent on that side of the net, they’re just young trying to figure things out. If I had a young team I would be in the same boat.”

Sophomore Paige Briggs led the Lady Toppers with 13 kills and 25 assists over FAU. Junior Lauren Matthews was right behind Briggs with 11 kills and 18 assists. Then junior Katie Isenbarger finished the match with nine kills and 14 assists.

“I think since we do have such a veteran team that only having four errors is pretty incredible, but we should be pretty solid,” Isenbarger said. “That’s like a standard, that’s an expectation. More than anything what led to our win is just our serving really. We really worked hard on that this week in practice.”

WKU had a .452 hitting percentage with only four errors played throughout the match.

FAU was the first to score at the beginning of the first set. FAU sophomore Stephanie Young knotted up the first set at eight each when she hit back-to-back aces.

WKU would proceed on a 4-0 run before FAU called its first timeout of the match as the Lady Toppers led the Lady Owls 12-8.

The teams traded blows but it was the Lady Toppers who maintained the lead by the second media break of the match. FAU’s junior Scherine Dahoue committed an attack error to extend WKU’s lead to 16-11.

Matthews capped off the first set with a kill, assisted by senior Nadia Dieudonne. WKU took set one by a score of 25-18.

Briggs highlighted the first set, completing six kills to lead her team over the Lady Owls to start conference play.

WKU began the second set going on a 4-0 scoring run. FAU’s sophomore Camryn Vogler broke the scoring streak with a kill of her own to cut the deficit in half 4-2.

Isenbarger ended the second set with a kill to go up two sets on the Lady Owls. WKU claimed set two 25-11 heading into halftime.

Starting the third set of the match, junior Ashley Hood hit back-to-back aces, her second and third of the match.

Hood said “being locked in” helped bring in another win for the Lady Toppers.

“I’m just gonna keep doing what we’ve been training this whole week, and just keeping it simple in what we’re supposed to be doing,” Hood said regarding the upcoming match on Monday. “Just doing our job, it’s gonna be just about being confident in what we can do and knowing that we can do it.”

By the first break of the third set, WKU held a 7-1 lead over FAU.

WKU went on a 9-0 scoring run to extend their lead over the Lady Owls to 12-1 prior to FAU’s final timeout of the match. Scherine broke the 9-0 run for the Lady Toppers coming out of the break.

With a big block in the third set, the Lady Toppers still kept a double-digit lead against the Lady Owls 16-4.

An attack error by FAU put the Lady Toppers up 17 points gaining the match point. WKU held FAU to seven points to end the first match of the series. The Lady Toppers took set three in dominant fashion 25-7.

“I think we all got to really work this week and we’re confident in putting pressure on the other team,” Hood said.

Sunday’s match is the 18th match the teams have played against each other where WKU had not lost any sets.

“Now that the big game is out of the way today I hear there’s a football game going on later,” Hudson said of the upcoming Super Bowl matchup Sunday evening. “Maybe that’ll get you through the evening. Thanks again for your support.”