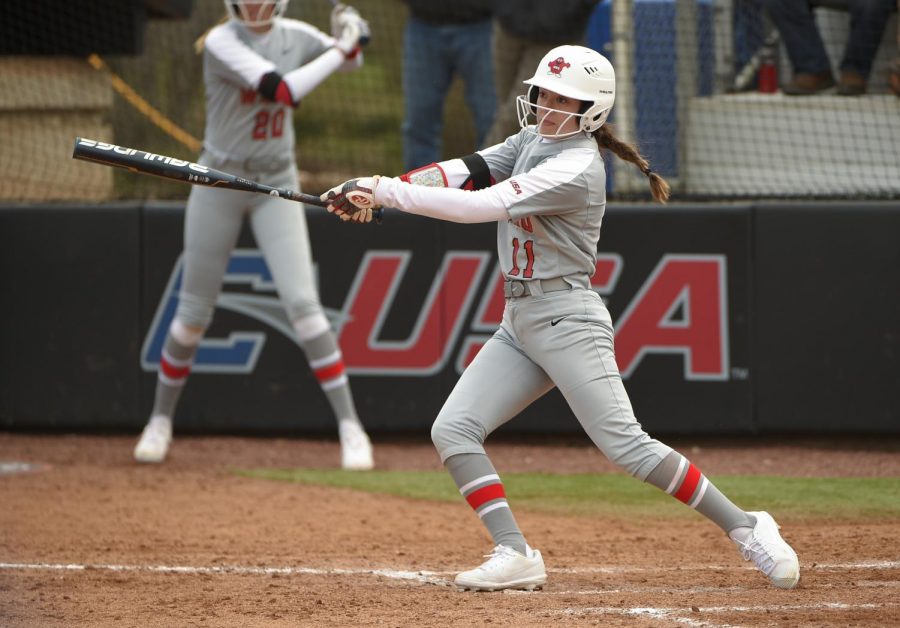 WKU (3-1) completed its second day of competition at the Chattanooga Challenge by picking up a win against Indiana State 15-9 and dropping a close rematch with Kennesaw State 5-4 after the Owls staged a late comeback.

WKU’s first of four scheduled matchups against the Sycamores was all about offense. Both teams combined for a total of 24 runs in a game that featured four homers, three coming off the bats of Hilltoppers.

WKU’s Sullivan got the start in game one and struck out the first five batters she faced. She was taken out in the fourth but ended the day with three innings pitched, three earned runs and six strikeouts. Not only did she ring up six batters, but she also hit a three-run homer in the third inning to put WKU up 4-0 after a solo shot from Carter in the first.

The two teams exchanged runs back and forth until the score stood 7-5 in favor of the Hilltoppers entering the sixth frame. WKU would break out for seven runs in the inning, three of which coming from Indiana State errors. Redshirt junior Maggie Trgo hit a pinch-hit double to bring in two runs for her first hit of the season.

Redshirt senior Shelby Nunn took over for Sullivan in the fourth and pitched well until the sixth inning when Indiana State started to mount what looked like a comeback, scoring four runs to set the score at 14-9. However, this would be the last time the Sycamores would score before redshirt freshman Katie Gardner would put the game away after relieving Nunn.

Both WKU and Kennesaw State remained scoreless until a two-run home run from Sullivan in the fourth, her third of the year, put WKU up 2-0. Redshirt freshman Brylee Hage and redshirt junior Kendall Smith would both score later in the inning off of a fielding error to extend the Lady Toppers’ lead to 4-0.

Redshirt senior Kelsey Aikey would pitch her second complete game against the Owls in as many games but this time she would not pick up the win. Kennesaw State staged a late rally in the top of the sixth inning, recording an RBI double and an RBI single to cut the lead to 4-3 before a two-run blast from the Owls’ Taylor Cates put the Owls ahead 5-4.

The Hilltoppers were able to get redshirt sophomore Jordan Ridge to third as the tying run in the bottom of the seventh but were unable to bring her home.

The Hilltoppers will face Indiana State again Sunday morning at 10 a.m. CT for their last game in Frost Stadium during the Chattanooga Challenge. WKU will then come home to Bowling Green for a four-game home stint Feb. 27-28 against Indiana State and Bowling Green State (Ohio).