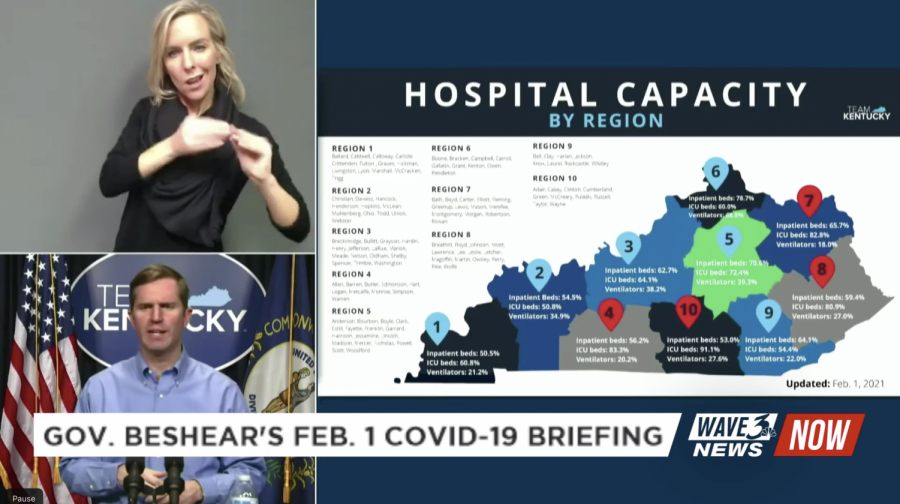 Beshear announced a "red" status for four hospital regions, including Region 4 which contains Warren and surrounding counties. Region 4 is at 83.3% ICU capacity, the second highest in the state.

Governor Andy Beshear held a press briefing today to address Kentuckians about the ongoing fight against the Covid-19 virus and announce 1,623 new cases of Covid-19 in the past few days.

The governor kicked off his COVID-19 address with good news regarding the number of weekly cases in the state.

“The trend on new cases, new weekly cases continues to move in the right direction,” Beshear said. “We have now had three straight weeks of decreasing numbers of total cases.”

Kentucky’s positivity rate has dropped from 9.4% on Friday to 8.85% today.

“That’s up a little since last Monday, but last Monday and today are significantly lower than what we have seen really for the past several months,” Beshear said.

There are currently 1,314 people who have been hospitalized and 337 of those people are in the ICU and 178 people are on ventilators.

In long term care facilities, there are currently 576 active cases and 322 cases of staff members that have tested positive.

Beshear said that the numbers in long term care facilities have been decreasing as vaccinations continue to be administered.

“With everything we’ve been through and the country’s been through, I think seeing a decrease, hopefully being optimistic that it will continue, but remaining vigilant is where we should be,” Beshear said. “When you follow all these good practices, when you wear a mask, when you remain socially distant, we see results.”

Following Beshear’s report on the state’s Covid-19 numbers, he switched gears to talk about the vaccination progression.

According to the governor, the first round of vaccinations has been received and distributed to hospitals around the state for health care workers. However, the second round has not yet been received.

“The second does when they come in are for a specific person and we’re gonna get them to that person. It may take a little longer than we would normally do in our first dose,” Beshear said. “But Dr. Fauci, CDC, FDA all say you gotta that second dose to the person.”

Beshear said the process of distribution took longer than expected, but he is hopeful that the continued planning and execution of the infrastructure being developed can help to speed up the distribution process to get the vaccine in the arms of Kentuckians who need it.