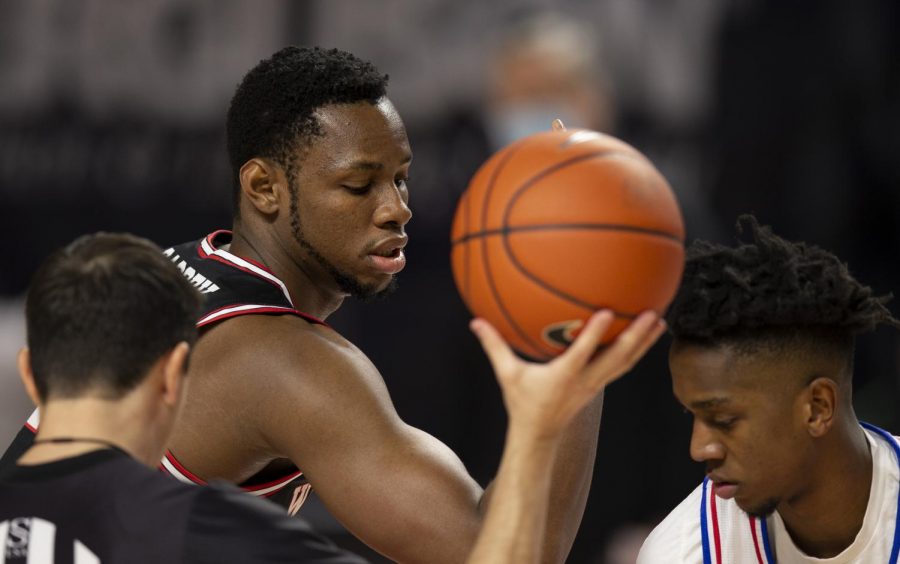 WKU Hilltopper junior center Charles Bassey (23) calms himself for the tipoff at the game against the LA Tech Bulldogs on Jan. 9, 2021 in Diddle Arena.

The Mean Green are led by senior Javion Hamlet who averages 13.5 points a game. Only three players average double-digit points per game with senior James Reece and senior Zach Simmons adding on with 10 each.

Last year, the two teams split the series but the last time these two teams met was in the deciding game on who would be the Conference USA regular season champions. North Texas took the win 78-72 in overtime with Hamlet leading the team with 25 points, nine assists and four rebounds.

Senior Taveion Hollingsworth led the Hilltoppers with 22 points and four steals while Carson Williams had 19 points and nine rebounds.

This year, North Texas has the second best defense in the conference, allowing 61 points a game. The Mean Green balance it out on the offensive end having the best field goal percentage and winning games by a 10 point margin.

“I feel like with us, you just have to play your game. If you just play your game, everything will be ok,” Hollingsworth said. “Not try to do too much, not try to play out of body, just do you, be you, and you’ll be alright.”

WKU is currently on a six game win streak after sweeping Rice this past weekend, having multiple weeks of games canceled within the past month. Add this weekend’s matchup to the list of games that are up in the air due to the weather in Texas.

“There’s a lot of worries about it, probably on both ends. We can’t control what’s going on down there,” head coach Rick Stansbury said. “The weather is part of it, causing the other issues. The information I get is the power outage and the water at the hotels are the big issues. But right now we’re proceeding to go play Saturday and Sunday and we’ll see what the next day brings.”

As announced on Wednesday, the Hilltoppers will play the Mean Green at 4 p.m. Saturday and 1 p.m. Sunday in Denton, Texas. Both games will still stream on CBS Sports Network on Facebook Watch.