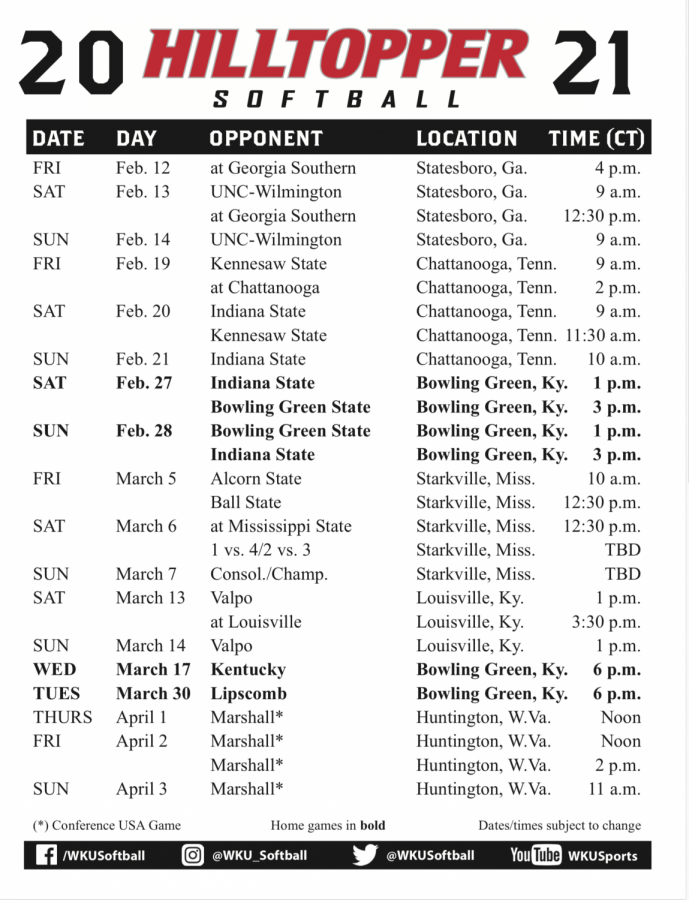 Tudor opened with a brief statement about her team, expressing her satisfaction with her squad ahead of the season.

“We’re excited about where we are and where we’re trying to go,” Tudor said. “I’ve got a good group of young ladies who have been working really hard. Good mindset, good focus, really preparing and building on what we did last year, taking that experience into this year and looking forward to playing softball again.”

Senior pitcher Kelsey Aikey, junior pitcher Shelby Nunn and junior catcher Kendall Smith were the athletes present, all of whom had just been named to the Conference USA Preseason All-Conference Team.

“I don’t really tend to look at awards or anything like that, I really focus on going pitch by pitch,” Aikey said when asked about receiving the honor.

Nunn said that while there are raised expectations that come with being named an All-Conference athlete, she viewed the award more as a means of motivation.

“It’s motivation, it is an honor to receive the award especially since it’s given by league coaches,” Nunn said. “But it just gives me that motivation to keep pushing forward.”

Smith made it clear that she and her teammates were excited to resume play after their 2020 season ended prematurely due to the pandemic.

“We’re tired of scrimmaging with each other, we get so competitive,” Smith said. “I’m excited to play someone else and take out all that competitive madness.”

Tudor said that she was glad to finally have a deep roster and mentioned a handful of other team members she feels will contribute greatly to the team this season.

“Kennedy Sullivan is someone that shines in a lot of different positions, she pitches and plays outfield and she’ll be hitting in the meat of the lineup this year, she’s a special player, I know she wasn’t picked for that preseason award but I think she’ll do big things for us this year,” Tudor said.

“Jordan Thomas sat leadoff for us the past three years and has done a really nice job of that, (she has) always been adaptable, whether it’s playing second, playing outfield, always willing to do whatever.”

“I feel like some of the freshmen that returned, [Taylor] Sanders, [TJ] Webster and Brylee [Hage], all got significant playing time and were huge roles on our team, I think the biggest thing is that we finally have some competition in every spot, so practices are better, it makes everyone else better competing against better athletes.”

There is still uncertainty around how many fans will be allowed to attend WKU’s games this season, but Tudor did not seem to think smaller crowds would affect her team that much.

“I feel like because the parking garage will be open, we will have fans out there,” Tudor said, referring to the parking structure that abuts the softball field. “It’ll just be an adjustment just like everything that everyone’s going through. We want as many fans as we can get even if it is the parking garage.”

Tudor warned that as good as her team is projected to be, WKU cannot risk taking their foot off the throttle.

“One of the biggest expectations is to not get complacent and to continue to strive to get better every day,” Tudor said.

WKU will open their 2021 season Feb. 12 at the Bash in the Boro tournament hosted by Georgia Southern. The squad will play their first home games Feb. 27-28 against Indiana State and Bowling Green State. The full season schedule can be found below.