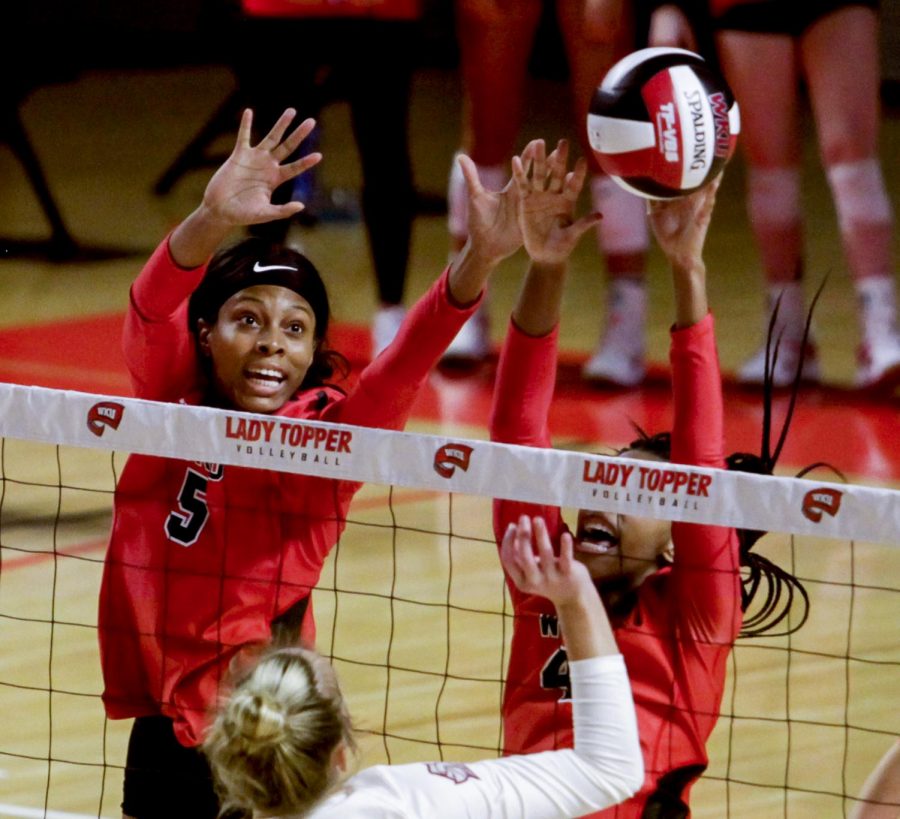 WKU middle hitters Lauren Matthews (5) and Avri Davis (4) block the volleyball after a hit over the net from Bellarmine opposite side hitter Ashley Price (4) at the game on Jan. 24, 2021. WKU won all three sets.

Matthews is the third Hilltopper in program history to be awarded with this accolade.

The two Lady Toppers who had previously been named Sports Imports/AVCA National Player of the Week were Jordyn Skinner, named on Sept. 13, 2011 and Amanda Schiff, named Nov. 10, 2003.

Throughout Sunday and Monday’s matches, Matthews had an average of 19.5 kills, 6.5 kills per set, 7.42 points per set and held onto a .630 hitting percentage. On Monday, she had hit the most kills a player has gotten so far this season within a three-set match.

According to Jessica Leifheit, Associate Director of Communications and Media Relations, Matthews’ Monday hitting percentage, .828 percent, is the second-best percentage of hitters with at least 20 attempts in all of NCAA Volleyball during this season.

This is Matthews’ second award earned this week. Yesterday she was awarded C-USA Offensive Player of the Week honors alongside senior setter Nadia Dieudonne.

The Lady Toppers swept Charlotte 3-0 in both of this week’s matches.

WKU (9-0) (4-0, C-USA) is currently seeing its best-ever undefeated start of the season in all of program history.