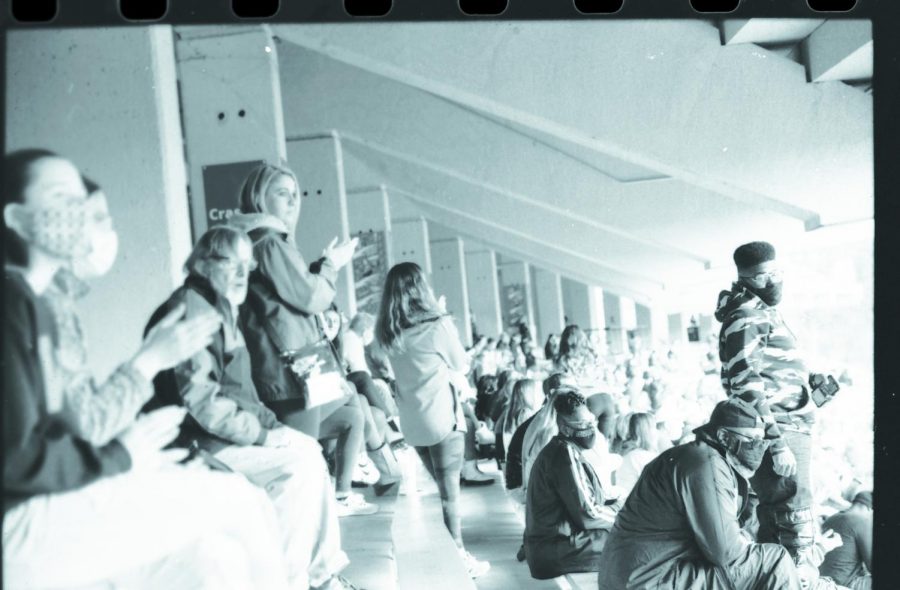 The crowd cheers at a WKU Hilltoppers football game against Southern Miss in Houchens Smith Stadium on Nov. 14, 2020.

On March 12, Conference USA canceled the 2020 tournament for men’s and women’s basketball. Since then, WKU and C-USA have returned to play amid the COVID-19 pandemic.

Over the summer, fans were without their favorite teams to watch, and athletes didn’t have any games on their schedules.

WKU psychology professor Rick Grieve and WKU sports psychologist Joey Case wondered what fans were doing without sports and how they were faring. Hence, they decided to conduct a study.

Grieve said he thought back in the summer he would start asking fans how they were coping without sports. Since the mid-1990s, Grieve has been conducting studies on sports fans.

“Here’s this big thing that’s going to affect the fans,” Grieve said. “How does it affect the fans? What kinds of lessons can we draw from it? That’s kind of where that idea came out for me.”

The study is titled “How Did Sports Fans Cope with the COVID-19 Pandemic?” Grieve said the study was sent to the International Journal of Sport Marketing and Management on Dec. 3. The study is still pending approval to be published.

For Case, this was an opportunity to get professional research experience. He said he was incredibly fortunate to be a part of the study.

“Crap, we’re psychologists and everything is gone now,” Case said. “Again, if it’s affecting us, we wonder just big picture how this is affecting avid sports fans.”

“I played a lot of golf and rewatched a lot of old sporting events,” college graduate Sam Fleming said. “Now I am just thankful sports are making a comeback.”

Grieve believes that from a marketing perspective, professional teams should consider archiving games on a platform such as YouTube.

“Gosh, if when we don’t have sports these people are going to the internet to watch old sports, maybe that would be a thing that teams would want to get into,” Grieve said. “Is there a way we can archive games, or at least advertise on the sites that archive games for our fans?”

Case works closely with WKU’s athletes and said he noticed them developing their fandom, and some were gaming in the absence of live sports.

According to the study, 37% of participants plan to watch more live sports as they return. Additionally, 27 of 84 participants said they would worry about catching or being exposed to COVID-19 when attending a sports game.

Abby Miles, a Nashville Predators fan, attended an NHL game on Jan. 26 with new protocols in place at the professional level.

“I thought they did really well,” Miles said of the guidelines set in place for Bridgestone Arena. “They had you do a health screening before just answering basic questions. Masks were mandatory unless you were seated, drinking or eating.”

The study concluded that, while the COVID-19 pandemic is a unique worldwide event, having the obtained data would be helpful for future times of crisis.