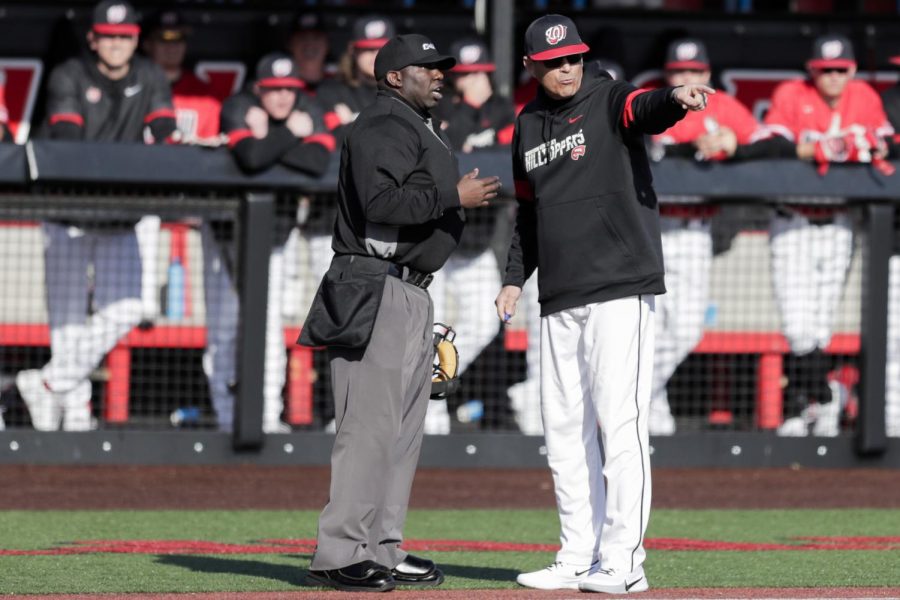 Head baseball coach John Pawlowski argues with an umpire during the game against Wright State on February 22, 2020 at Nick Denes field. WKU won 7-2.

WKU Baseball has announced its 2021 schedule Monday afternoon. The Hilltoppers finished the 2020 season 10-6 before the campaign was cut short due to COVID-19, but now they’re back to work on the diamond.

“We are excited to announce our 2021 schedule and look forward to the challenges that lie ahead,” head coach John Pawlowski said in a press release. “We have all been impacted in so many different ways over the last year, so the season being just two weeks away is a welcome sight for this team.”

Last March prior to the Hilltoppers first Conference USA series at Alabama-Birmingham the season came to a halt and from then on no baseball has been played.

This season the Hilltoppers will play in 32 C-USA games this season highlighted by 21 non-conference games. Additionally, WKU will go up against Vanderbilt, Belmont, Tulane, Kentucky and Louisville.

The Hilltoppers will look to pick up where they left off while facing a 2021 slate featuring 11 games against teams currently ranked or receiving votes in national preseason polls and 13 matchups with squads that finished their 2020 season ranked inside the top-50 RPI.

“This is one of the toughest non-conference schedules we’ve had in recent years,” Pawlowski said. “It will certainly help us prepare for our 32 Conference USA games this season.”

WKU will open the season in Nick Denes Field on Feb. 19 against North Dakota State after a 346 day hiatus. The last time the program took to the diamond was March 10, 2020, at Kentucky losing 10-4.

Then Hilltoppers will take to the diamond against Power Five opponent Vanderbilt on Feb. 23 in Nashville, Tennessee at Charles Hawkins Field. According to d1baseball.com, the Commodores are predicted to begin the 2021 season as the No. 4 program in the nation.

Following the non-conference road trip to the Music City, the Hilltoppers welcome the Cincinnati Bearcats to The Nick for a series on Feb. 26-28 before embarking on a five game road trip.

WKU will head back down to Nashville to face off against the Belmont Bruins on March 2. Then from March 5-7, the Hilltoppers head down to New Orleans for a series with Tulane. The respective programs will be playing each other for the first time.

To round out the first road trip of 2021 the Hilltoppers head up to Lexington to play at Kentucky, another Power 5 opponent, on March 9.

WKU’s matchup with the Wildcats will precede a seven-game homestand, as WKU will host Bowling Green March 12-14, Bellarmine March 16 and Valparaiso March 19-21.

Then Hilltoppers will then face Louisville on March 23, who is currently ranked fifth in D1Baseball’s preseason poll, before heading into conference play.

WKU will open their C-USA slate at home against Charlotte on March 26-28 before hitting the road to face Florida International on April 1-3.

The Hilltoppers’ last two conference series of the season will come at home against Florida Atlantic on May 7-9, who is receiving votes in the NCBWA preseason poll and ranked 30th in RPI last year, and on the road at Old Dominion on May 14-16.

WKU will then close out its regular season slate with a matchup against Eastern Kentucky  on May 18 at Nick Denes Field.

The C-USA Tournament is currently scheduled to begin on May 26 and will be hosted by Louisiana Tech.

“I’m really proud of this group for preparing and navigating through the COVID-19 world we currently live in,” said Pawlowski. “The returning seniors have been tremendous leaders who we will rely on to continue the quest for a C-USA Championship.”

Due to limited capacity based off of our state COVID-19 guidelines, WKU Athletics will not be able to offer season tickets or walk-up sales at baseball games this season. Streaming will be available for most games and live stats will always be available at WKUSports.com. A streaming schedule for spring sports is expected to be released soon.