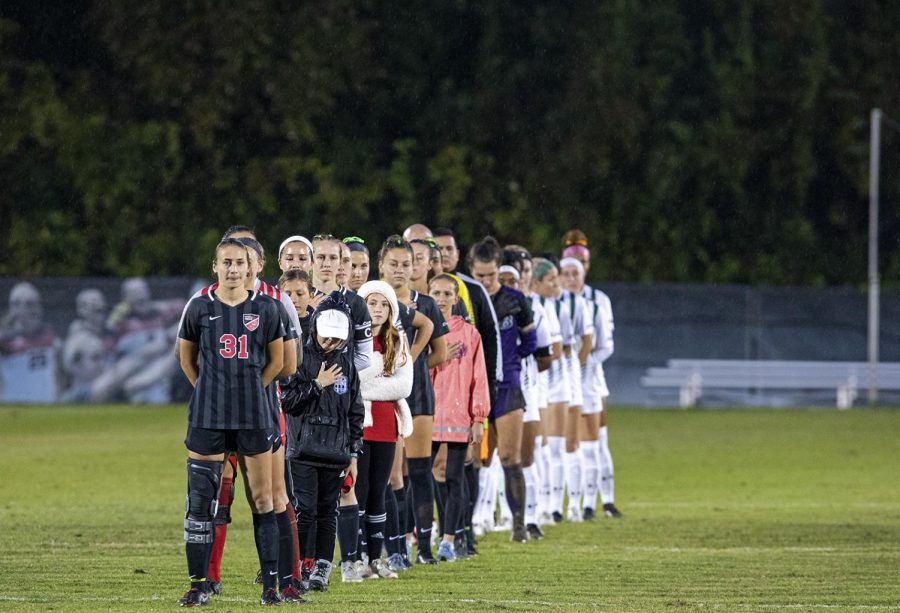 The WKU soccer team stands for the national anthem before the game against UAB at the WKU Soccer Complex on Friday, Aug 26, 2019.

Today’s match in Carbondale, Illinois was played in the high 30-degree weather as the Lady Toppers got its first shutout of the season over Southern Illinois.

“I am so happy for our players,” head coach Jason Neidell said in a release. “It’s obviously been a challenging year for everyone. Having our last three matches canceled and really not being able to train this week, I just wasn’t sure what to expect today.

The first half was dominated by the Lady Toppers, and their 2-0 lead looked to give them a good advantage heading into the second half. Southern Illinois couldn’t manage to gain any leeway against the Lady Toppers lockdown defense in the first half.

WKU sophomore Sydney Ernst struck first blood against the Salukis at the five-minute mark, the goal was the first of her career on the Hill. Freshman Brina Micheels assisted on the goal for her second assist of her career.

Shortly after 23 minutes into the first half WKU junior Ambere Barnett managed to strike second with an assist from senior Avery Jacobsen. The goal accounted for Barnett’s first goal of the season, and the seventh goal of her career.

After halftime was over, freshman Annah Hopkins at 59 minutes scored off an assist from Barnett to continue laying into Southern Illinois. This was Hopkins’ first goal of her career with the Lady Toppers giving her team a 3-0 lead.

Some notable players and stats for the game are that Swartz and Hopkins both managed to notch their first goals of their college career in this game.

The Lady Toppers carried the momentum into the second half after scoring the first goal of the match. Sophomore goalkeeper Ashley Kobylinski came up huge for the Lady Toppers defense with four saves and her first shutout.

“While there are plenty of lessons to be learned from the match, I am proud of the resiliency and determination we showed,” Neidell said. “It’s also exciting to see the production we are getting from our freshmen, and I was particularly glad to see Izzy (Isidora) Pekez back on the field after a long absence. We now turn our attention to the start of a very competitive conference race.”

WKU will kick off Conference USA play against Middle Tennessee State on Feb. 27 at 7 p.m.