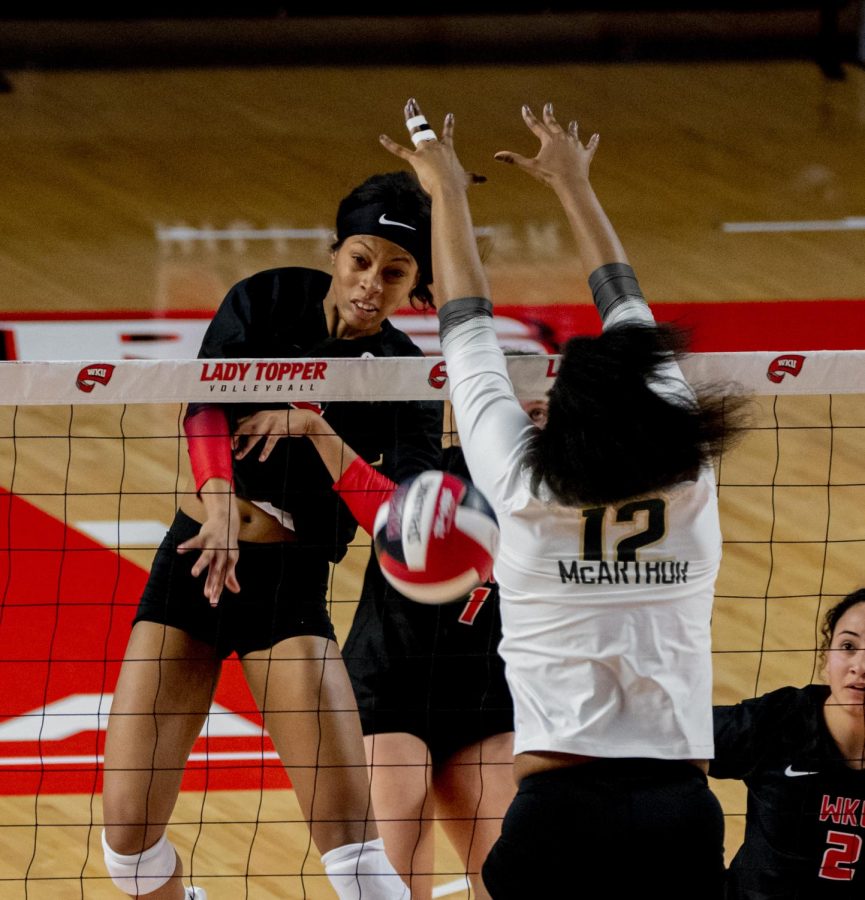 WKU Junior Lauren Matthews (5) spikes the ball during their game against Charlotte on Monday, February 22, 2021 in Diddle Arena.

“Exactly what I expected,” head coach Travis Hudson said of Charlotte. “I knew they would come back today and bring it again and they’re really good. Charlotte is here to stay in this league for a long time. They’re really talented.”

“From the moment Lauren has gotten here she has always been coachable,” Hudson said. “We saw a couple things on film technique-wise that we thought we could clean up and she did it and it was certainly impactful.”

Matthews said postgame she wanted to turn a new page after Sunday’s match.

Two kills by Matthews put the Lady Toppers’ first points up on the scoreboard to open the match.

Matthews then put up two more kills for WKU as well as performing a big block to a Charlotte ball. Matthews had achieved all five points for the team up to that point.

The Lady Toppers exhibited a stronger start in set one compared to Sunday’s match. The team was up for almost the whole duration of the set, tying once throughout the set but never falling behind Charlotte.

Junior Katie Isenbarger prevented a tie at 17-15 with a kill,senior Nadia Dieudonne provided the assist on the play.

WKU extended their lead to seven points, 23-16, towards the end of the first set, with a kill by sophomore Avri Davis. An attack error by 49er freshman Emani’ Foster put the Lady Toppers up to set point, and WKU won the set in the next play 25-17.

WKU was first on the scoreboard in set two, getting a point due to a Charlotte attack error.

Matthews got her first kill of the set on the third play, putting the Lady Toppers up 2-1.

Not allowing a tie at that point in the set, a kill by Davis brought the team up 9-7. Following the lead of Sunday’s match, the score stayed tight.

Charlotte pushed ahead on the scoreboard for the first time of the match in the second set after a kill by Foster. The 49ers stayed ahead for five plays until WKU came back in front.

In the play following WKU’s first timeout of the match taken in set two, a kill by Matthews helped the team push forward 20-19.

A kill by Briggs put the Lady Toppers up to set point, with the team up three points, 24-21. WKU pulled in its second set win 25-21 after a Charlotte attack error by 49er sophomore outside hitter Nalani Lyde.

For the third set in a row, WKU put up the first point after Matthews hit a kill, her 15th kill of the match. Charlotte did not put up its first point, a WKU service error, until the Lady Toppers were up by three.

Four out of the five first points WKU had in the third set were kills by Matthews with assists by Dieudonne.

A big block from Isenbarger put the team up five points, bringing the score to 8-3.

The 49ers had their first timeout of the set at 10-5, after a kill by senior Kayland Jackson. The play following the timeout was a kill by Matthews, coming from a ball from Isenbarger, bringing the score up to 12-5, WKU leading by seven points.

A lead of eight was a familiar look for the Lady Toppers headed towards the end of the third and final set, holding that lead by eight seven times.

Following a bad set, the 49ers called their second timeout of the set. Immediately following the timeout, 49er senior outside hitter Sydney Rowan fired back with a kill.

WKU stayed at 22 points for five plays as Charlotte racked up four points, bringing the score closer together 22-20.

A kill by Matthews allowed the team to get their first point after their hiatus of putting up points throughout the final plays of the third set.

The team saw another kill, this time by Briggs, leading to setpoint. A Charlotte attack error blocked by Dieudonne and Isenbarger finished off the third and final set of the match.

“I think it was super crucial,” Isenbarger said about the Charlotte series victory. “I’m so excited to get into film this week, and see what improvements I need to make. I think it was super important, especially cause we’re gonna most likely see them again in the conference tournament.”

The Lady Toppers will travel to Marshall next week for the third C-USA series of the spring. WKU will play at noon on both Feb. 28 and March 1.

Hudson said he and his team have been looking forward to a road trip this season.

“I love to be together with them and not have to be their coach,” Hudson said. “We do have a challenge with Marshall. This Marshall team split with Charlotte at home a couple of weeks ago. We’re looking forward to getting out together.”