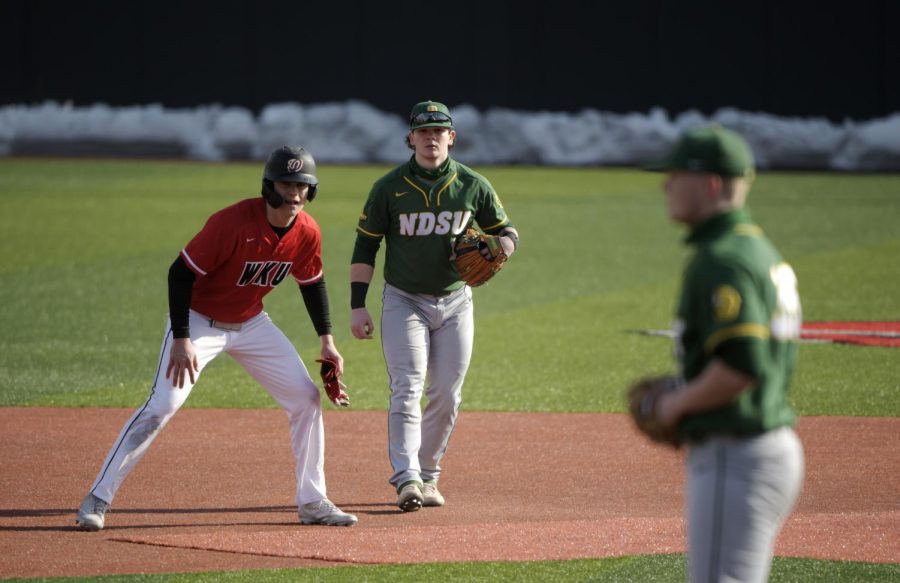 Outfielder Jackson Swiney (6) waits to run to third base as North Dakota right-hander Gabe Pilla (1) and first baseman Bennett Hostetler (1) try to hold him off.

WKU (1-2) finished up its season opening series against North Dakota State (2-1) Monday evening dropping both games in doubleheader fashion on the day.

“Give North Dakota State credit,” head coach John Pawlowski said. “We did a lot of uncharacteristic things we normally don’t do. There’s a lot we have to clean up. They’ll respond and come back after a frustrating day for us here today in these two games.”

Pawlowski said his team has better days ahead of them this 2021 season after returning to play.

WKU redshirt junior Michael Darrell-Hicks was awarded his first start of the season for the Hilltoppers. He tossed for 3.1 innings allowing six hits, six runs, and struck out two Bison batters. Darrell-Hicks now has one loss on the season.

Bison sophomore Ben Smith took the mound against WKU. He tossed for four innings, giving up seven hits and three runs. He fanned two WKU batters while putting up 70 pitches on the day.

Pawlowski said as far as the pitching staff goes they’ll have to continue to see who fits best in the slot where pitchers can best be successful.

“They all have positive attributes where they can play at a high level,” Pawlowski said of his pitching staff. “Our whole rotation is out of sync because we played on Sunday and Monday. We’re going to find out who can help us and who is going to have the opportunity to go out there and pitch.”

In game one Monday sophomore outfielder Jackson Swiney went 2-of-4. He hit a double, while scoring two runs in the game.

The Hilltoppers picked up right where they left off from Sunday night scoring three runs in the bottom of the first inning. Senior Ray Zuberer III flew out to left field as senior Jack Wilson scored the first run over the Bison.

Darrell-Hicks struck out Bison junior Calen Schwabe for his first strikeout of the season in the second inning.

At the top of the third inning Darrell-Hicks allowed four singles in a row before Pawlowski had a chat on the mound with the starting pitcher. The Bison cut into WKU’s lead, adding four runs in the third inning to claim the 4-3 lead.

The Bison continued to pour on runs to begin the fourth inning. Junior Jack Simonsen hit a two run homerun to extend the Bison lead to 6-3. Darrell-Hicks was relieved in the fourth for junior Dalton Shoemake.

Through the seventh inning the Bison added two more runs making it 8-3. Junior Riley Boyd came in for Shoemake in the top of the fifth inning. The Bison also made a change on the mound as well bringing in junior Zach Smith for Ben Smith after four innings of work.

Boyd was taken off the WKU mound after 2.2 innings of work while allowing three hits and two runs on 47 pitches thrown. Redshirt junior Collin Lollar came in during the seventh inning for the Hilltoppers.

To start the bottom of the eighth, Swiney slammed a double into right field. Swiney advanced to third base after senior infielder Kevin Lambert and sophomore outfielder Jackson Gary were walked in back to back at bats.

“We kind of no showed in both games today,” Swiney said. “We need to find a way to click on all cylinders and we’ll be ok. This is just a hiccup and we’re going to be fine.”

Smith then hit freshman infielder Eric Riffe with a pitch to score Swiney from third cutting into the Bison lead 8-4. Two at bats later, senior designated hitter Richard Constantine knocked a single into midfield scoring Gray pulling the Hilltoppers closer 8-5. Smith got out of the inning by striking out Zuberer.

WKU wasn’t able to jump start themselves late in the game, like last night’s game as the game ended with a three up and three down.

Junior pitcher Ryan O’Connell got the start for the Hilltoppers in the second game of the day. O’Connell transferred from Alabama after playing in four games in 2020. He tossed for 1.1 inning allowing six hits and four runs. O’Connell picked up his first loss as a Hilltopper.

North Dakota State junior pitcher Evan Sankey took the mound in the bottom of the first inning for his first start of the season for the Bison. Sankey tossed for five innings picking up eight strikeouts against WKU claiming his first win of 2021.

The Bison were able to get off to another hot start when Brock Anderson smashed a double to right field in the top of the first inning. Then in the next three at bats the Bison scored three runs getting off to an early 4-0 lead.

O’Connell was able to get out the top of the first inning, but not before surrendering another run to push the Bison lead to 4-0. The Hilltoppers went three up and three down to start the second game of the day with two strikeouts from Sankey.

After a rough first inning, Pawlowski decided to pull O’Connell and replace him with freshman pitcher Lane Diuguid.

Graduate Davis Sims was the first Hilltopper to get on base after getting hit by a pitch, but the next three Hilltoppers got out to leave him stranded on base.

The Bisons continued their hot start by scoring two more runs off of three hits in the top of the third inning to make the score 7-0.

Redshirt sophomore Aaron Shiflet and freshman Dalton Mesaris came in to pitch for WKU from the sixth to seventh innings respectively. Freshman Luke Stofel came in for Mesaris to close out the top of the seventh.

Between the sixth and seventh inning the Bison had extended their lead to 10-0.

Zuberer batted in WKU’s first runs of the game in the bottom of the seventh. Wilson and sophomore Matthew Meyer scored for the Hilltoppers making it 10-2 North Dakota State.

Redshirt junior pitcher Bailey Sutton came in for the ninth inning to close out the game for the Hilltoppers.

WKU had nothing left in the tank with the final three outs. The Bison took the series with a 10-2 win over the Hilltoppers.

WKU will travel to Nashville, Tennessee, to play against Vanderbilt (2-0) on Wednesday at 4:30 p.m.

“The biggest thing is how much work we have to do,” Pawlowski said. “This team has to get back up, it’s early in the season and I like the leadership we have. These guys will respond and play at a high level.”