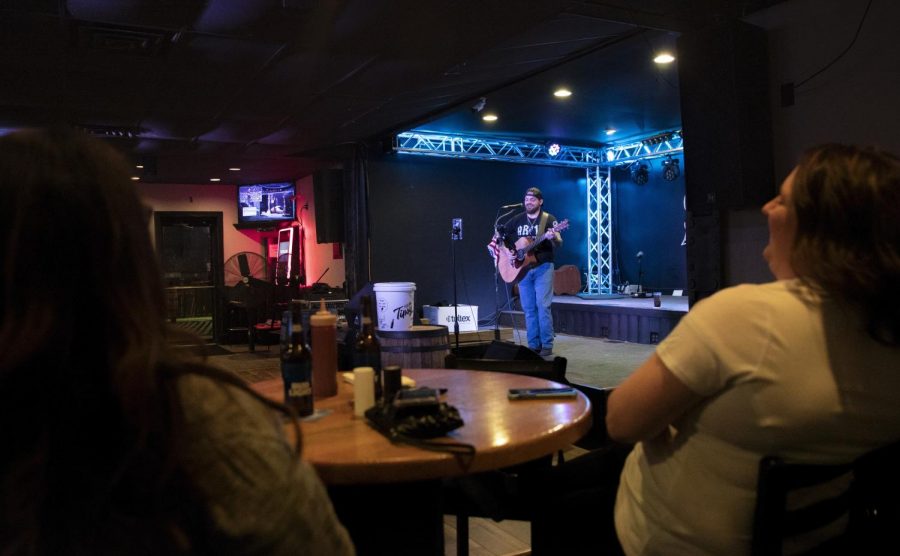 Despite the name, the band currently only features Justin Flynn. “My band is technically incomplete at the moment, but I am working with a few guys that I think are going to work out good,” Flynn said.

Throughout the concert, Flynn engaged with the audience, accepting song requests and thanking his listeners. Flynn sang hits like Don’t Rock The Jukebox by Alan Jackson and Neon Moon by Brooks and Dunn.

The Bowling Green native said he found his passion for singing and playing the guitar when he was 12 years old.

“I was kinda overweight and had a low self-esteem, so I thought playing and singing would make girls attracted to me,” Flynn said. “It allowed me to escape from everyday life and get lost in songs, as well as deal with stress.”

Flynn has been playing in the music industry for six months and has big dreams.

Flynn said a few of his musical goals include enjoying the journey, becoming a respected household name, and gaining popularity in country music.

“[I want to] make sure that every song I write has meaning and helps people cope with their emotions, daily life, goals, aspirations, to follow their heart or dreams,” Flynn said. “I want to leave a stamp on country music that help[s] it become country again.”