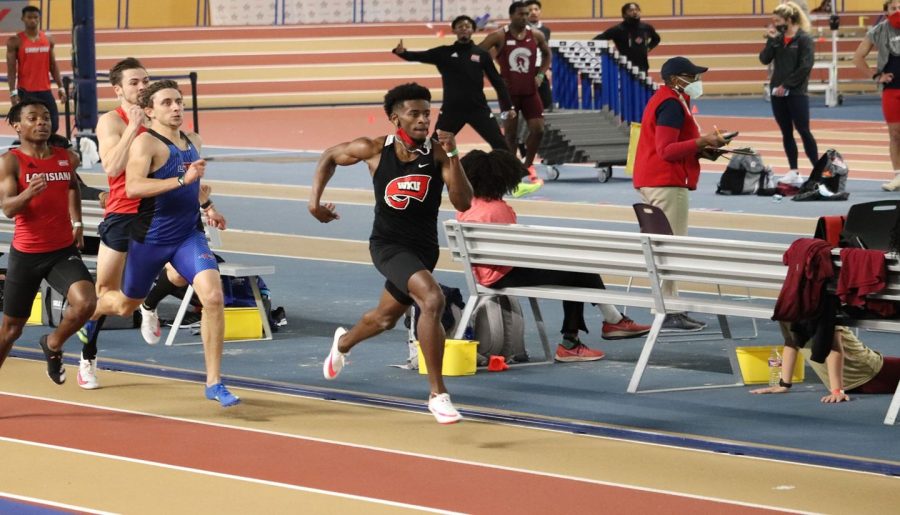 Graduate Marlowe Mosley running on Feb. 7, 2021 at the Jaguar Invitational. Mosley claimed the 400-meter title in the third event of the spring.

WKU Track & Field completed its third of four indoor meets at the Birmingham Crossplex on Sunday, bringing home 17 top-ten finishes in another consistent performance for the team.

Graduate senior Marlowe Mosley set the tone for the afternoon by winning his first 400-meter event of the year, running a 48.44 and claiming first place by .19 seconds. His time was .33 seconds faster than what he ran at the 2020 Conference USA Indoor Championships and currently places him second in the conference.

Sprints Coach Tosha Ansley was happy with Mosley’s performance and credited some of his speed to the techniques the team has been employing in their practices.

“As far as his race was concerned, it was good to have a win,” Ansley said. “We’re still working on things, we’ve been running with weight vests a lot the last couple weeks. To see him run through the progressions like he did and follow the race plan under a heavy load was good.”

“I was very happy with the male throwers today,” Brent Chumbley, director of cross country and track & field said. “It was by far the best competition we’ve seen.”

Freshman Casey Buchanan came home 12th in the 800-meter in his indoor meet debut for WKU. Junior Dedrick Troxell finished second in the mile event (4:14.18), improving on his personal record.

Distance Coach Brooks LeCompte said he felt his squad took a big leap forward during the meet and praised Heckman and junior Maddy Hurt for their efforts.

“Today was a huge step forward for our group, Maddy [Hurt] had a big personal record in the 3,000 meter and Savannah [Heckman] ran a very strong double starting with a nice mile personal record and a solid 5,000 meter afterwards,” LeCompte said. “Overall, we still have minor things to fix but today we got better.”

The pole vault team didn’t get the results they wanted, but freshman Allison Ferguson still was able to log a personal best (3.20m). Coach Chumbley was not upset with their performance, however.

“In terms of pole vault, we jumped better than the results indicate,” Chumbley said. “We did some really nice things and learned a lot today that should translate down the road.”

WKU will only have a few days to rest before returning to the Birmingham Crossplex on Friday, Feb. 12 for their fourth Samford Invitational of the season.