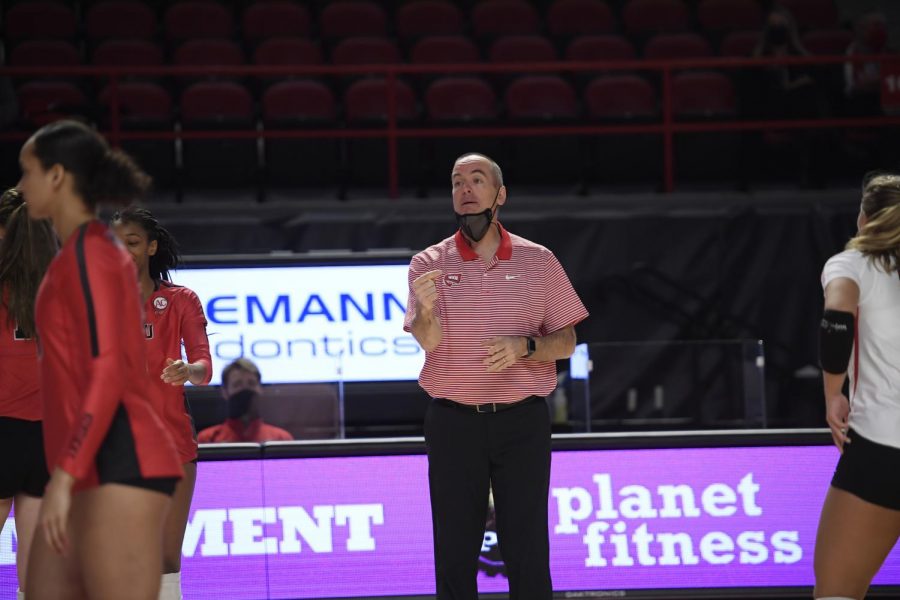 Volleyball head coach Travis Hudson yelling to his players in the second match against Florida Atlantic on Feb. 8, 2021 in Diddle Arena.

“Unless you’re a coach I don’t think you can fully grasp how difficult it is to get a team prepared to play coming off of an impressive victory,” head coach Travis Hudson said. “To this point our best servers have been Hallie Shelton and Ashley Hood.”

“The thing I am most pleased with is what we’re trying to do is learn from wins instead of having to lose to learn,” Hudson said. “Every week we are able to pinpoint things to be better. I think we’re just trying to build as strong a suit of armor as we can in terms of depth.”

WKU was first on the scoreboard in set one, with the first kill of the match by Lauren Matthews. FAU got its first point of the first set with the score at 7-1, and their second at 14-2

WKU only allowed five points from FAU in the first set of the match, the lowest score it allowed since joining C-USA. Half of the Owls points in the first set came off of services errors by the Lady Toppers.

“The biggest key is just stay locked in and focus,” senior Kayland Jackson said. “Travis talked about how the second day is culture and it comes down to how hard we play, and just staying mentally engaged because it’s hard to play the same team the first day and then the second day.”

The complete domination carried over into the second set as the Lady Toppers went on another 7-0 run to start the set. The owls showed resilience, climbing back into the match to bring the deficit down to four when FAU called its second timeout of the match, 14-9.

The power of the Lady Toppers was too much as they scored 11 of the next 16 points to take set two 25-15, with a kill by Kalyand Jackson to end the set.

“I would 100% say culture, because it’s really hard in this COVID year,” Jackson said. “Travis has driven that into us, that we can’t make excuses. We need to be grateful to play this game every day because there’s some people that you know aren’t even playing volleyball right now they got their seasons canceled.”

WKU trailed behind by a maximum of two points throughout set three.

The score stayed tight, with the teams being tied four times.

While FAU called their second timeout of set three, WKU was up 8 points, leading the set 18-10. Immediately after the timeout, Ashley Hood hit an ace, the second of the set.

Sophomore Paige Briggs got a kill with an assist from Logan Karl, leading the Lady Toppers to match point, 24-11.

Another kill by Briggs put up another set win for the Lady Toppers, sweeping the match 3-0 against the Lady Owls. WKU now holds a 27 win streak against FAU.

“I mean it’s given me a lot of confidence,” freshman Sam Canner said following the sweep. “I am in awe of my teammates every day at practice and just how hard we work, it’s definitely deserving.”

Up next the Lady Toppers head up to Norfolk, Virginia for its first matchup against Old Dominion (2-1) on Feb. 14-15. Both matches are slated for 11 a.m. CT.

“I think it’s exciting. I’ve been coaching for 26 years and you don’t have many new road trips,” Hudson said. “Looking at them a little bit on film they are quite competitive.”

This is the Monarchs inaugural season and the Lady Toppers look to start off on the right foot against a new conference foe.