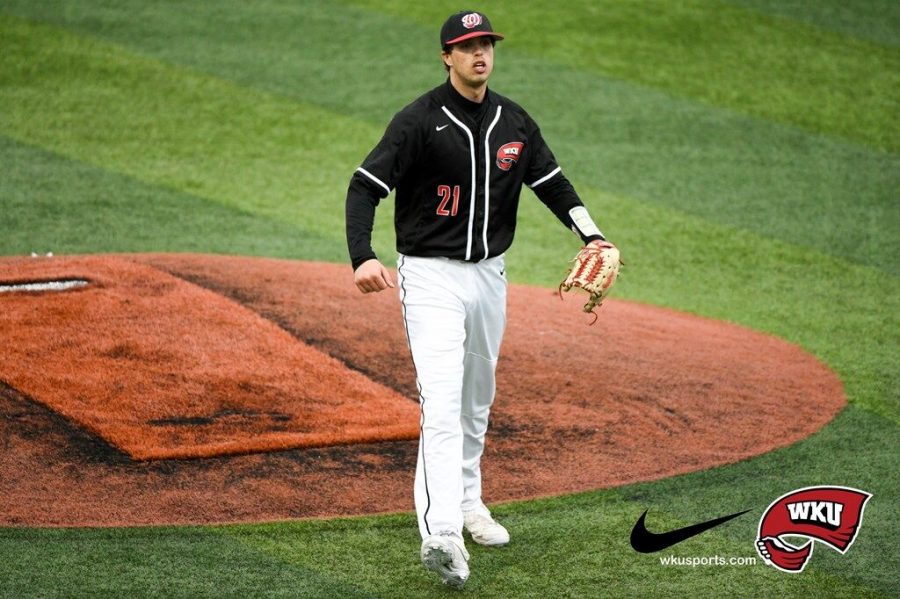 Redshirt sophomore Jake Kates pitched in his first start of the season against the Cincinnati Bearcats. The Cincinnati native struck out 11 Bearcat batters during his seven inning outing.

The Hilltoppers (2-3) were back home Friday afternoon hosting the Cincinnati Bearcats (0-4). WKU won 5-4 in a 12 inning affair with a walk-off double from freshman Eric Riffe.

“There were several times that we had to come back and they just kept battling and battling, and I’d say it’s a really good win against a very good team and the thing is you build character in these types of wins,” head coach John Pawlowski said.

The Bearcats had 10 hits over the Hilltoppers in the 12 inning contest. WKU had five hits for five runs to snap its three game losing streak.

Redshirt sophomore pitcher Jake Kates got his first start of the 2021 season Friday afternoon. He tossed for seven innings, while striking out 11 batters and allowed one Bearcat run.

“Obviously the 1-3 start is not what we expected and what we wanted, but tonight the resiliency we showed and the way we battled against a very good team in Cincinnati is just awesome,” Kates  said. “I think it just shows that we’ll be fine throughout the rest of the year, and it’s a really great win.”

WKU redshirt junior Bailey Sutton picked up his first win of the season. He pitched for four innings while striking out three Bearcats.

Junior Evan Shawver got the nod to start for the Bearcats. The lefty went on to toss for six innings, striking out nine batters and allowing zero runs on one hit.

After letting up two straight hits to start the game, Kates closed out the top of the first inning with two strikeouts. The Hilltoppers were only able to get senior center fielder Ray Zuberer III on base via a walk, but left him stranded on first base to end the first frame.

The Hilltoppers went three up and three down. Sophomore right fielder Jackson Gray hit into a double play to end the inning.

In the third inning, both the Bearcats and the Hilltoppers went three up and three down.

Zuberer got the first hit for the Hilltoppers in the bottom of the fourth. Zuberer and sophomore left fielder Jackson Swiney advanced to second and third with two outs on a wild pitch. Senior catcher Matt Phipps struck out to end the inning and a scoring opportunity.

The Bearcats started the top of the fifth inning leaving a runner stranded on first base after a walk. The Hilltoppers still had nothing to show in the bottom of the fifth with another three up and three down inning.

In the top of the seventh frame, Kates struck out the last two batters leaving a Bearcat runner stranded on first base. Then WKU came alive in the bottom of the seventh.

WKU scored its first run of the game off of senior Kevin Lambert’s single up the middle, allowing Phipps to score from second base after the sophomore catcher Joe Powell dropped the ball.

Murphy was replaced by junior Beau Keathley after allowing the Hilltoppers to score and surrendered two walks as well. Keathley got the Bearcats out of the seventh inning with a ground out to third base.

To start the top of the eighth inning, the Hilltoppers sent out redshirt sophomore Mason Vinyard to the mound for Kates after a seven inning performance.

Vinyard got off to a rough start by allowing two straight hits to start the top of the eighth inning, putting Bearcat runners on second and third. Sophomore first baseman Ryan Nicholson hit a sacrifice fly to score graduate third baseman Eric Santiago to give the Bearcats the lead 2-1 in the top of the eighth.

Vinyard got out of the top of the eighth inning by striking out Mercer and stranding Nicholson on second base. Keathley walked two Hilltoppers to start the bottom of the eighth.

Then Swiney knotted it back up with a single to left field scoring redshirt freshman Ty Crittenberger who pinch ran for senior Richard Constantine. Then the Bearcats made a switch of pitcher by putting in graduate Nathan Moore on the mound for Keathley.

After Moore walked Gray to intentionally load the bases, he was able to pop up Lambert stranding three Hilltoppers on base.

Sutton struck out the next three Bearcat batters, but a passed ball allowed Murray to score from third giving the Bearcats the lead 3-2 to start the bottom of the ninth inning.

Moore hit both Zuberer and designated hitter Junior Coleman to put two Hilltoppers on base with two outs left in the bottom of the ninth inning. The Bearcats then went to the bullpen to replace Moore with sophomore pitcher Zach Segal.

Swiney was then hit by Segal scoring senior first baseman Jack Wilson to tie the game up at 3-3. Swiney was tagged out on a fielder’s choice at second base to end the ninth inning and push the game to the tenth inning.

The Bearcats went three up and three down to start the tenth frame. Gray was walked to start the bottom of the tenth, then Lambert advanced him to second after a sacrifice bunt. Segal got out of the frame by forcing a WKU pop up.

Sutton had a rough start to the 12th inning by allowing two straight singles, then a wild pitch to advance the Bearcat runners to second and third base.

Graduate shortstop Joey Bellini then hit a ground out  allowing freshman center fielder Cole Harting to give the Bearcats the lead 4-3. Sutton got a ground out to end the top of the 12th, while leaving a Bearcat runner stranded on third base.

Phipps started off the bottom of the 12th with a single, then reaching second base after an error by Santiago. Phipps then advanced to third base after a ground out by Gray. Segal then walked Lambert to put runners on the corners for the Hilltoppers.

Riffe then hit a walkoff double to right field scoring both Phipps and Lambert to win the game for the Hilltoppers 5-4.

“That was my second time coming up in the same situation,” Riffe said. “I didn’t get it done the first time, but the second time happened to get it done so it feels really good.”