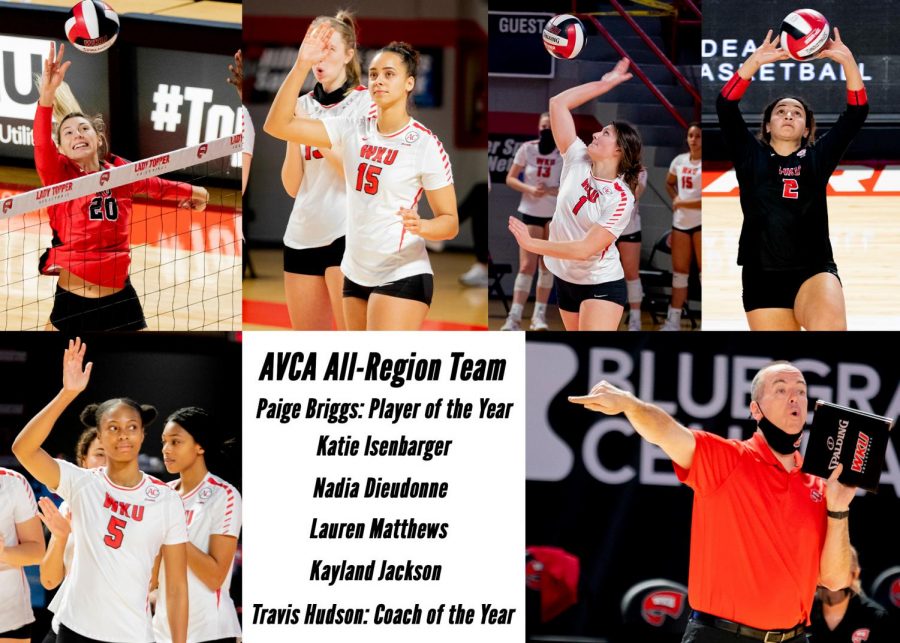 Six members of the WKU volleyball program were awarded American Volleyball Coaches Association South All-Region accolades on April 13, 2021 prior to the first round of the NCAA Tournament.

The WKU volleyball program arrived at the NCAA Tournament on Sunday and will play in the first round Wednesday at 9:30 p.m. against Jackson State.

“In terms of the bubble I guess we’re all rookies,” head coach Travis Hudson said. “I’ve never been coaching volleyball on April 13 before.”

Hudson said he’s supposed to be out on the lake catching fish as opposed to coaching volleyball in the spring.

“This team has propped me up with the success that they’ve had on the court all year long,” Hudson said. “I’m still blown away to see my name associated with those things because there have been so many years where our program struggled and didn’t achieve all the things that we wanted.”

“I think this team, this particular group everybody makes everybody else better, and I think that’s really shown through and and being recognized,” Hudson said.

WKU has had a lot of dead time in the bubble prior to the first match. Hudson said the program has a team room and they’ve been coming up with every game they can think of to stay engaged before having a late game Wednesday.

On the way to Omaha, Nebraska junior Katie Isenbarger filmed the journey into the bubble and what the set up was like. Isenbarger said she didn’t expect to be in charge of shooting the vlog inside the bubble until WKU’s media team asked her.

“It’s been really fun just because we’ve gotten to actually spend a lot of time together on a plane trip and bus trip and here in the banquet room,” Isenbarger said. “I think we needed that as a team, and that we’ve been missing this spring.”

Isenbarger has racked up a .413 hitting percentage this season, which ranks third in C-USA and top-20 in the NCAA. Her performance on the court translated to the AVCA honoring how her performance went in the regular season.

“I’m super honored. I’m more impressed and proud of the fact that we have four other of my teammates picked for that as well,” Isenbarger said. “That just goes to show it isn’t just me, it’s our whole team and my teammates are the ones who helped me get this award.”

Isenbarger said she’s always thinking about what she needs to do to help her team out on the court and what specific individual jobs she needs to get done.

“It’s all the little things,” Isenbarger said. “It’s about my blocking, my decision making, about my serving and those are things I’m constantly thinking about.”

Briggs picked up her second career award from the AVCA after being tabbed Freshman of the Year in 2019. The Ortonville, Michigan native recorded a .344 hitting percentage with 3.70 kills/set and 3.61 digs/set. Briggs has tallied 12 double doubles despite the team’s 17 sweeps this season while also owning a 98 percent success rate in serve-receive with just five errors on 251 attempts.

“I’m very blessed to get it but I have an amazing team behind me,” Briggs said. “Having so many people win awards in that just shows how well founded our team is.”

Briggs said the bubble life with her teammates has been really fun so far.

“The team bonding at night and just taking a break from the stress of school right now, and just sticking together as a team has been really fun,” Briggs said.

In preparation for Jackson State Hudson said they’re an interesting team because the thing that stands out is there is no one who stands out on their roster.

“They don’t have one kid that you circle on your scouting report,” Hudson said. “They’re a pretty balanced team from from end to end and, and the thing that impresses you about them is they know how to win.”

JSU is 11-0 coming into the first round of the NCAA postseason and Hudson said the story of the match isn’t going to be about stopping one particular player, it’ll be about being sound and being consistent.

“I feel like I can just give my presence and I try to be calming and just make it fun,” Briggs said heading into her second NCAA postseason. “We’re here to have fun and just do what we love, which is this game.”

The match against Jackson State will be broadcasted on ESPN3 and via ESPN Radio 102.7. Brett Williams will be on the play-by-play with Ken Marshall joining for color commentary.