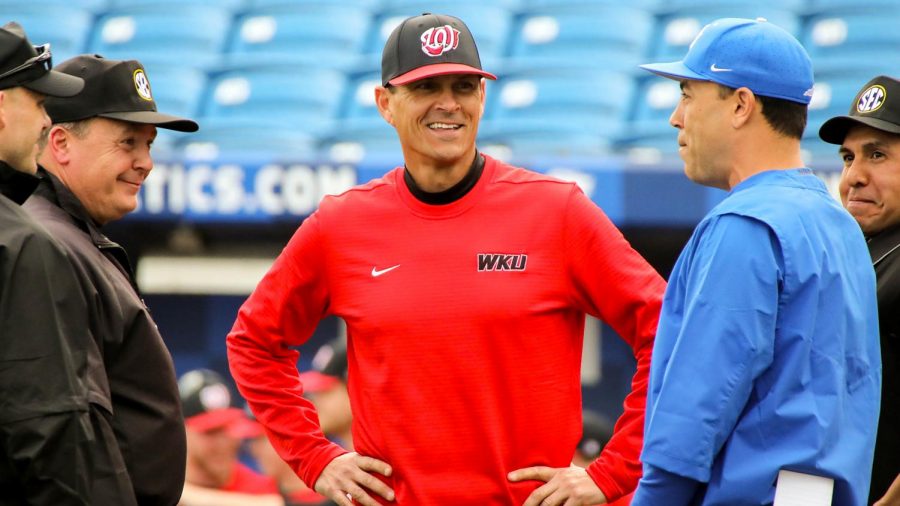 WKU Baseball returns to the Hill this week following an abrupt end to the 2020 season.

“You can tell college baseball is here cause the weather turns cold,” Pawlowski said to begin the press conference.

For the Hilltopper baseball club this season, the program has 23 returning players and 16 additions ready to compete for the Conference USA Championship down the stretch.

Senior shortstop Kevin Lambert fell victim to his final year on the Hill being canceled last spring, albeit he signed the blanket waiver to make his return in hopes of a productive season.

Pawlowski said Lambert was in his opinion the best shortstop in C-USA going into the season.

“You know, It’s not that much pressure, It’s what I’ve done my whole life,” Lambert said when asked if he felt any pressure ahead of the season. “My only job is to make the routine play and there’s no pressure whatsoever and it’s nice to hear that [Pawlowski] said that.”

Prior to the COVID-19 pandemic, the Hilltoppers posted a 10-6 record and were on the cusp of playing conference games. On March 12, 2020, that opportunity was officially taken away in the midst of traveling to Alabama-Birmingham.

“We all miss the game we love playing,” Pawlowski said. “I know that our student-athletes are really excited about it, so we’re looking forward to next week.”

Friday will mark the first time WKU will play a game on the diamond in 346 days on Friday hosting North Dakota State at 3 p.m. No pitcher has been announced for the opening day yet.

Thursday’s forecast has a 70% chance of frozen mix, a potential hazard to push back the season opener.

According to WKU Athletics, no season tickets or walk-up sales will be available this season due to limited capacity based on COVID-19 guidelines. Games will be streamed on WKUSports.com and a streaming schedule is to be released in the coming days.

As for the clubhouse atmosphere, this season redshirt sophomore pitcher Jake Kates said with the COVID protocols in place it’s different.

“We used to be able to sit in there and hang out before games,” Kates said. “It’s very separated especially with the 45 plus guys that we have on this team. You have to take a more conscious effort and be safe about it as well.”

Back on the mound redshirt junior Michael Darrell-Hicks makes his return as well. Since the end of Darrell-Hicks’ sophomore campaign, he’s made four appearances. He had Tommy John surgery in the summer of 2018 after pitching in the Great Lakes Summer Collegiate League.

“Missing basically two seasons in a row has not been that fun,” Darrell-Hicks said. “I’m just trying to keep my head down and just keep working that way I can perform the way I want to perform when the season starts.”

WKU will play in 53 total games this spring. The first 20 are against non-conference opponents until March 26. The Hilltoppers have 32 dates with C-USA foes in 2021.

The way league play is arranged teams will play four games on Fridays through Sundays. Saturday’s games will be double-headers seven innings apiece.

Pawlowski said he’s discussed with his staff how they’ll set up for the four-game weekends.

“For the pitching staff, it’s going to be particularly interesting to see,” Pawlowski said. “I don’t necessarily know if we have the formula yet.”

WKU has not played in a C-USA regular season game since May 18, 2019, when the Hilltoppers played Old Dominion in Nick Denes Field.