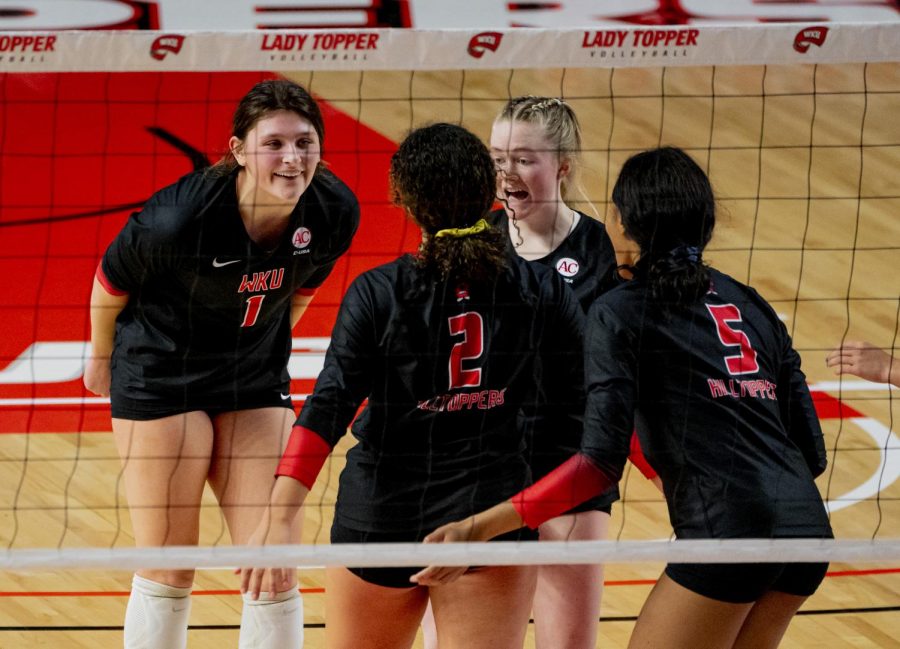 WKU claimed its eighth sweep in a row, sweeping the Thundering Herd Sunday afternoon, maintaining the program’s record undefeated start to the season.

Senior setter Nadia Dieudonne had 45 assists in the match, the most she’s garnered this season. Junior middle hitter Lauren Matthews had 15 match kills and a .419 hitting percentage. Sophomore outside hitter Paige Briggs saw her fifth double-double of the year and hit 14 kills throughout the match.

Marshall was the first to get up on the scoreboard, putting up three points in a row. A kill by senior Kayland Jackson with an assist from Dieudonne was the play that gave the Lady Toppers their first point making it 3-1 Marshall.

After a kill by Matthews, the Lady Toppers were tied 9-9. Then WKU achieved its first lead of the match due to a Marshall attack error at 10-9.

For the eight plays the set stayed close, with WKU either tied with Marshall or up by one. A kill by junior Katie Isenbarger put the Lady Toppers up 15-14.

Following Marshall’s first timeout of the match, WKU gained back-to-back points with a block by Matthew and a kill by Briggs.

Set one was held at setpoint for five plays after Marshall went on a three-point streak. Set one was closed out with a Hilltopper set win at 25-20 after a kill by Matthews.

Similar to the first set, Marshall struck first blood on the scoresheet. A Marshall service error allowed WKU to receive its first point of the set.

Matthews brought in her sixth kill of the match, putting WKU up five points. Four plays later, Matthews blocked a Marshall ball and immediately after blocked another.

WKU increased its lead to eight, its biggest lead at that point of set two after a Marshall attack error, bringing the score up to 21-13.

The team then saw a lead of nine for the duration of two plays. A kill by sophomore Avri Davis led the Lady Toppers to a set win, 25-17, with a final lead of eight points.

A kill by Jackson started the third set and put the Lady Toppers up first on the scoreboard for the first time in the set. Marshall then had a four-point scoring run, and the run was stopped by two kills by Matthews, both assisted by Dieudonne.

Three back-to-back kills by Briggs bumped the score up to 7-5 WKU early on in the final set.

Matthews then hit a kill for all four of WKU’s next plays, which were all assisted by Dieudonne.

WKU’s lead continually increased throughout the third set. The Lady Toppers broke to a five-point lead, the largest of the set, after a Marshall attack error extending the lead to 17-12.

Isenbarger then broke a Marshall streak with a kill, putting up the team’s 20th point of the set.

The set stayed at set point for two plays and brought in the set win following a kill by Briggs, her 14th of the match. WKU took set three 25-22 with a three-point lead.

WKU will be facing the Thundering Herd in the second match of this week’s series Monday, Feb. 28, at noon CT. The match will be available to stream on C-USA TV through a subscription.