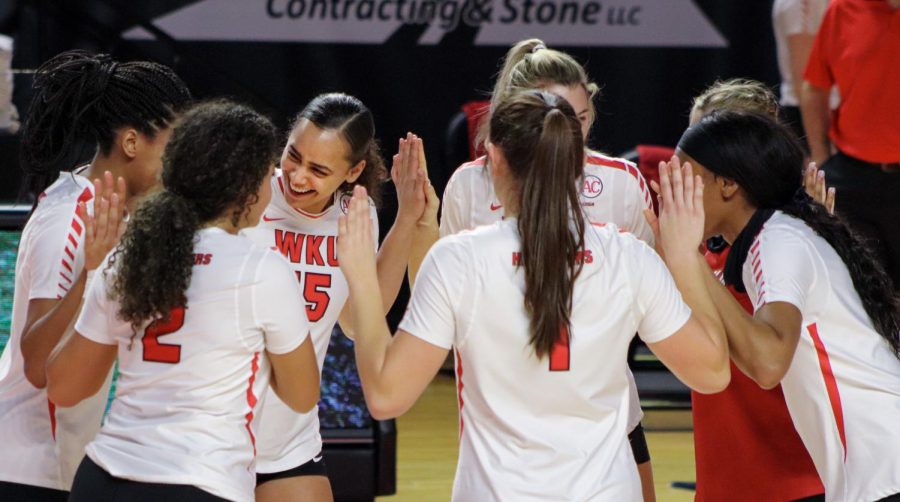 WKU senior Kayland Jackson (15) smiles with her teammates before their spring 2021 season opener against Mercer at Diddle Arena on Jan. 24, 2021.

The Lady Toppers are playing their second non-conference double-header of the season on Sunday, Jan. 31. WKU (3-0) will be taking the court on 11 a.m. against Saint Louis, and 6 p.m. against Evansville (1-1).

The team last met with Saint Louis in 2018, sweeping the Billikens 3-0. Evansville and WKU last met 15 years ago, in 2006. Sunday will be the Billikens’ season opener.

WKU enters Sunday No. 24 in the nation ahead of the double-header.

Coach Travis Hudson said the motto in practice this week has been: “the little things are the big things.”

“We hope to be much improved this week,” Hudson said in a Zoom video conference on Friday.

The team previously won back-to-back games against Mercer and Bellarmine on Jan. 24, winning the matchup against the Bears 3-1 and sweeping the Knights 3-0.

“I think we’re a better team today than we were last Friday,” Hudson said.

Junior defensive specialist Ashley Hood said the team is going to continue to do the best they can.

“Travis [Hudson] always tells us during this time to just be grateful,” Hood said.

The Lady Toppers went into their previous matches with little amount of practice compared to previous seasons prior to the COVID-19 pandemic.

“Before we played, we hadn’t played since the fall, we were trying to get everything fine tuned before we played anyone,” Hood said. “It’s been a lot more focused.”

The recent wins are not necessarily what the team is focusing on, junior middle hitter Katie Isenbarger said Friday.

“I think that the wins are not necessarily the focus,” Isenbarger said. “I think everyone on the team is individually focused on what they want to do better.”

These two upcoming matches will be the last matches before conference play begins.

“Playing different teams with all these different styles really exposes us,” Isenbarger said. “It’s a great opportunity to expose us and show what we need to work on.”