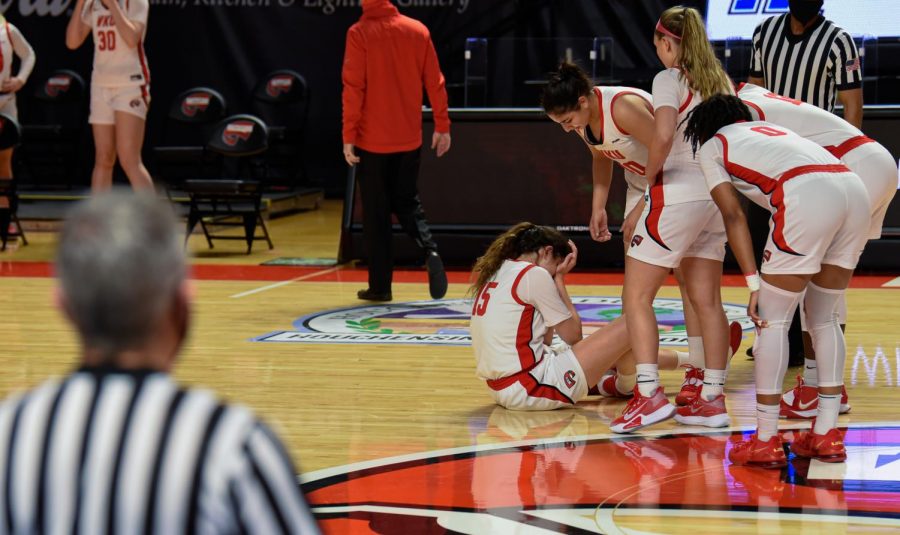 Raneem Elgedawy (15), forward for the Lady Toppers, sits on the court after nearly getting injured during WKU’s game against the Middle Tennessee State University Blue Raiders. WKU fell to MTSU 75-65.

“First of all I am proud of how the kids kept fighting,” head coach Greg Collins said. “We had a horrible second quarter, they came back in the second half and they kept fighting in the third quarter and even being down in the fourth — they kept grinding away.”

To kick things off, the Lady Toppers won the tip off and scored on their opening drive to take a quick 2-0 lead. However, MTSU redshirt senior Deja Cage returned fire, drilling a three pointer from deep to take the lead.

WKU and MTSU would trade the lead several times throughout the course of the first quarter.

“There were some hard hits in there that might have sent a message to us,” Collins said. “I don’t think that’s what rattled Raneem.”

By 4:18, Elgedawy had drawn fouls twice to amass three points. She had nine points by the end of the first quarter. WKU claimed the first frame of play 16-13 over MTSU.

Elgedawy’s dominant first quarter performance caused her a bit of grief near the end of the first quarter as she took a hard hit and had to head to the bench with just seconds on the clock.

“They’re really tough so they’ll definitely be back tomorrow,” Collet said. “But yeah they kinda punked us, so tomorrow we’re just gonna come in with a different attitude.”

The Lady Blue Raiders were not so dominant in the first frame of play, but that changed in the second quarter, where they managed to take back the lead from WKU and led 24-18 with 4:50 remaining in the half.

MTSU also managed to go on a 11-1 run over the last 4:28 of play in the second quarter. WKU trailed MTSU 34-20 at the sound of the halftime buzzer.

“We made some costly turnovers that led to some easy transition baskets at some inopportune times,” Collins said. “I feel like they handled the pressure, we just didn’t stay poised.”

Elgedawy led the Lady Toppers’ offense in the first two quarters with 10 points and six rebounds. The Lady Blue Raiders offensive weapon, Anastasia Hayes, had a 13 point first half and one rebound.

The Lady Toppers were trailing the Lady Blue Raiders in about every aspect of the game in the first half. MTSU shot 41% from field goal range, whereas the Lady Toppers shot 25%. WKU was also outrebounded 16-25.

Both teams had turnover issues handling the ball in the first half. WKU had 10 turnovers and MTSU had seven going into the locker room.

Elgedawy started off the quarter by drawing a foul to go to the line and would make her first free throw. She would also score another two points on WKU’s next possession. By the 3:23 mark, Elgedawy had 22 points and seven as WKU trailed 48-44.

The Alexandria, Egypt, native picked up her 30th career double-double with 3:26 left on the clock in the third frame of play. Additionally, Elgedawy inched closer to a new career high in points with another full frame left to play.

At the end of the third frame WKU trailed 55-47 after allowing MTSU to maintain the lead. The Lady Blue Raiders had five turnovers in the third quarter while WKU had seven rebounds and scored 27 points.

“I told Raneem at the shoot around we would need 30 points to win,” Collins said. “I think she had that in mind and maybe it was my fault for telling her that. Maybe that’s why she took so many threes.”

The final frame started off with a steal from Hayes to drive straight to the basket and make it 57-47. Collett answered back with a triple to pull back within seven points. However, after Collett’s three pointer, WKU would turn the ball over twice as MTSU went on a 6-0 run.

Collins would call a timeout at the 6:23 mark to give his team some time to make adjustments. Elgedawy appeared upset before Collins called a timeout as she bounced the ball to the official with aggression.

Sivori also went down with a hard hit at the 4:35 mark of the quarter. She would go to the bench, but Collins said over Zoom she would be okay for the second game of the series.

Around one minute remaining in regulation, Collet would drill a three pointer to give WKU three of their last triple, but it wouldn’t be enough to take down MTSU.

MTSU would take the first game of the series with a score of 75-65 to jump ahead 1-0 in the weekend series.

“It always helps, especially coming off a loss,” Collett said. “I think tomorrow, we’ll play with a little more edge.”

The Lady Toppers will conclude their series against MTSU tomorrow night at home. Tip off is scheduled for 6 p.m.