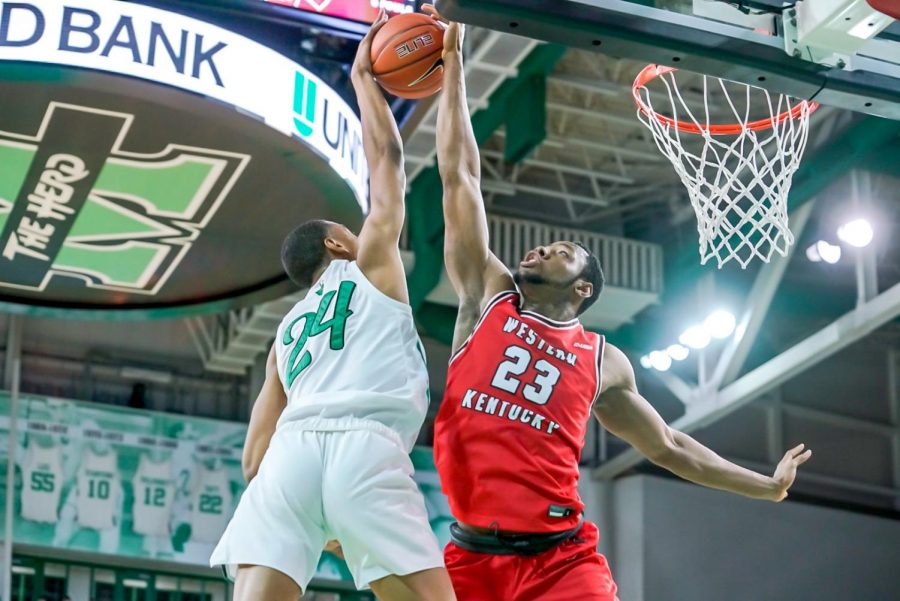 Junior Charles Bassey (23) blocking a shot against Marshall junior Taevion Kinsey (24). WKU held on for the 69-67 win on Jan. 17, 2021 over the Thundering Herd to sweep the series.

On Friday, the Naismith Memorial Basketball Hall of Fame announced WKU Basketball junior center Charles Bassey has been named a top-10 finalist for the 2021 Kareem Abdul-Jabbar Center of the Year Award.

Named after 1995 Hall of Famer and three-time NCAA Champion Kareem Abdul-Jabbar, the annual honor in its seventh year, recognizes the top centers in men’s college basketball.

Bassey was named to the Kareem Award watch list last season before his sophomore campaign was cut short after just 10 games by a season-ending leg injury. He was a top-five finalist for the 2019 Kareem Abdul-Jabbar Award, and one of four freshmen to be named a finalist in the award’s existence.

The junior is averaging 17.8 points, 12.2 rebounds and 3.4 blocks per game. He’s one of just two players in the country with multiple games this season of at least 20 points, 10 rebounds and five blocks, and the only player with three such games.

Bassey is the only player in the nation since at least 2010 with three games in a season of at least 20 points, 14 rebounds and five blocks.

Bassey has also produced his eye-popping numbers against top competition. WKU’s non-conference strength of schedule was ranked 16th in the country by the NET on Wednesday.

In four games against West Virginia, Louisville, Alabama and Memphis, he averaged 19 points, 12.3 rebounds and 3.8 blocks.

Bassey’s been named Conference USA Player of the Week six times already this year, tying former Cincinnati star and longtime NBA pro Kenyon Martin for the league record for most in a single season.

Fans can vote for Bassey at the following link:http://goto.ps/CBKareem2020

In late February, five finalists will be presented to Mr. Abdul-Jabbar and the Hall of Fame’s selection committee.