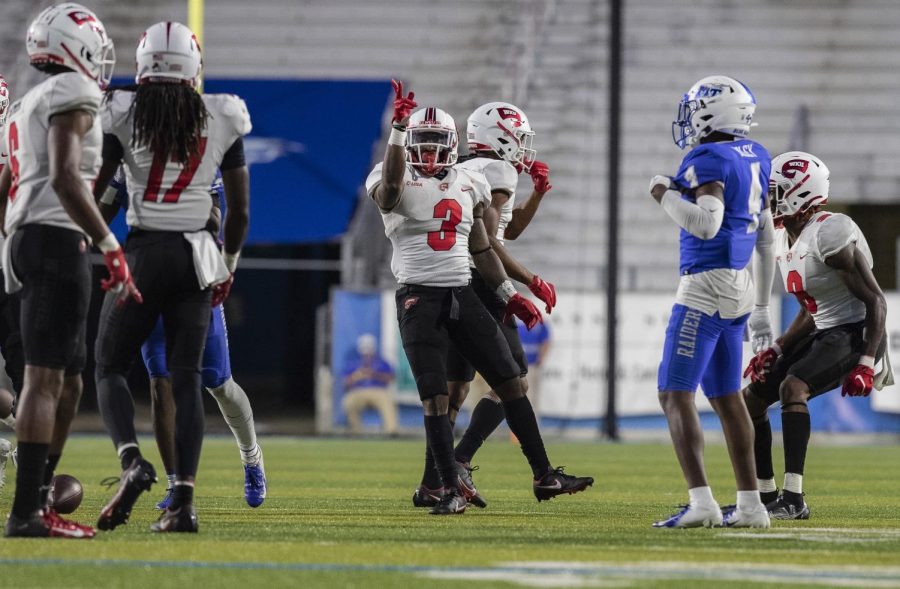 WKU running back Jakairi Moses signals a first down after rushing for 10 yards to the MTSU 34 yard line on October 3, 2020 at Floyd stadium. The Hilltoppers defeated the Blue Raiders 20-17 to advance to 1-2 on the season. Moses finished the night with 5 carries for 36 yards.

WKU Football released its full 2021 schedule Wednesday. The Hilltoppers will play in 12 games this fall with matchups against Michigan State and Indiana University.

The Hilltoppers will face a non-conference schedule in 2021 with a combined opponent record of 24-15 from their previous seasons.

The full 2021 schedule can be found here.

WKU opens the season on the Hill in Houchens-Smith Stadium on Sept. 4 against UT Martin followed by a road game at Army on Sept. 11. The last time the Hilltoppers played the Skyhawks was Sept. 9, 2000. WKU shutout UT Martin 71-0 and are 4-0 all-time against the Ohio Valley Conference program.

The third week of the season WKU welcomes the Hoosiers to the Hill on Sept. 25 after Indiana University finished the 2020 season 6-2. The Hilltoppers are 0-3 all-time against Indiana, most recently losing 38-35 back on Sept. 19, 2015.

Per WKU’s contract with Indiana, the Hilltoppers will be due $550,000 upon completion of the game at WKU. Indiana will become the first Power Five program to play twice at Houchens-Smith Stadium. WKU will play at Indiana in 2022 and in 2029.

WKU will take on Michigan State for the first time in program history on Oct. 2. The Hilltoppers will head to East Lansing, Michigan, going against a team that went 2-5 in 2020 that only played Big Ten games.

Then on Oct. 16 WKU kicks off a two-game road trip starting with a matchup against Old Dominion. WKU won their last matchup 20-3 against the Monarchs and are 5-1 all-time versus ODU.

WKU has their lone homestand of the season against Charlotte and Middle Tennessee the next two games. The Hilltoppers play Charlotte on Oct. 30 and are 3-1 overall against the 49ers. WKU won 37-19 back on Dec. 6, 2020, to close out the regular season.

Two out of the three final games will be on the road for WKU in 2021.

The final home game of the season WKU will host Florida Atlantic on Nov. 20. Last season the Hilltoppers lost 10-6 on the road. WKU is 3-9 against FAU all-time.

For the 2021 season finale, the Hilltopper football program will travel to Huntington, West Virginia, to face Marshall. Last season WKU fell 38-14 in their homecoming game. WKU is 4-8 overall against the Thundering Herd.

Head coach Tyson Helton will be entering into his third season on the Hill while welcoming five new faces to the coaching staff.

New offensive coordinator Zach Kittley highlights the newest coaches on the Hill. Kittley came from Houston Baptist and worked with Kansas City Chiefs quarterback Patrick Mahomes during his tenure at Texas Tech from 2013-2015.

The Hilltoppers were one of only 16 college football teams in the nation to play in 12 or more games during the COVID-19-affected year.