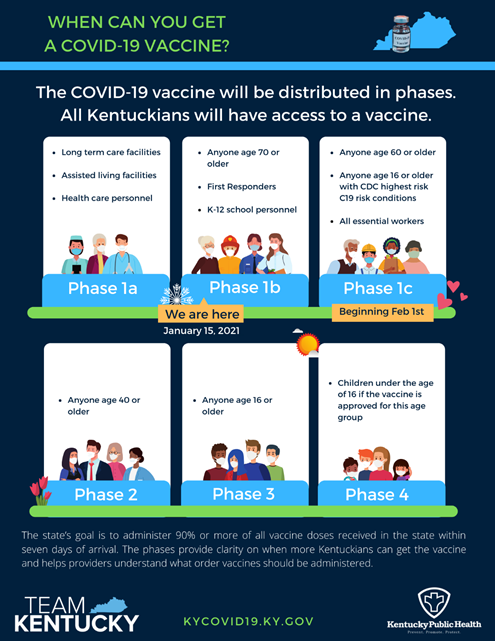 Kentucky has released its four-phase vaccine distribution plan for the coming months.

Phase 1 will occur in three parts, the first being to long-term care facilities, assisted living facilities, and health care workers. The second, which the state is currently in, will be distributed to anyone age 70 or older, first responders, and K-12 school personnel. The third will be anyone age 60 or older, anyone age 16 or older with CDC highest risk conditions, and all essential workers.

Phase 2 consists of vaccinating anyone age 40 or older, phase 3 will cover anyone age 16 and older, and phase 4 will cover children under the age of 16 if the vaccine is approved for that age group.

“This is a very exciting announcement that’s going to help us do more and do better with vaccinations,” Beshear said in a press conference on Jan. 14.

“This is all about team Kentucky delivering on an ambitious, life-saving project,” Gray said.

According to the Kentucky Cabinet for Health and Family Services, the goal of Kentucky’s vaccine rollout is to administer 90% of all vaccines received in the state within 7 days of arrival. While Kentucky’s rollout has been slower than expected, Beshear stated that he is hopeful for the coming weeks of distribution.

“I’m not okay with the pace that they are currently being provided,” Beshear said. “We have too many people out there who are rightfully anxious, and they need to see this whole country pick up the pace.”