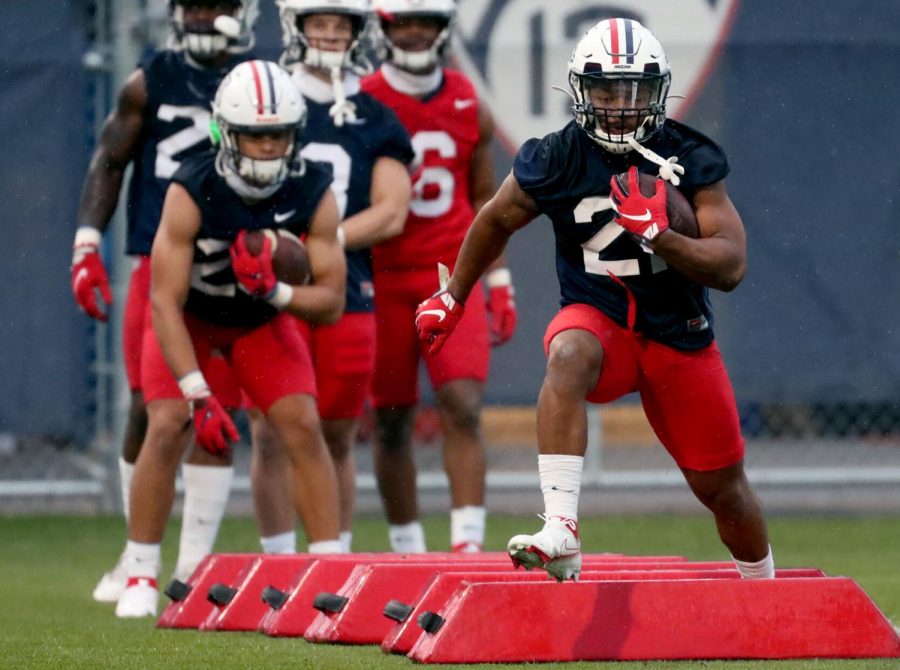 Running back Jalen John high steps his way through a drill with the other ball carriers on the first day of spring practice for the University of Arizona, Tucson, Ariz., March 23, 2021.

The Arizona Wildcats held their seventh practice of spring camp Tuesday evening. Here are some notes and takeaways from the workout:

* The defense continued to get the better of the offense during 11-on-11 play. The secondary had numerous pass breakups, including one by Christian Roland-Wallace in the end zone. Jaxen Turner then intercepted a Gunner Cruz pass in the end zone.

* Cruz earlier connected with tight end Alex Lines for a short touchdown pass inside the right pylon. The other offensive touchdown during 11-on-11 came on a quick pass from Will Plummer to Tayvian Cunningham.

* Another freshman tailback, Stevie Rocker Jr., produced the biggest play by the offense, taking a screen pass, turning upfield and racing down the left sideline.

* After defensive tackle Trevon Mason exited early, Paris Shand took his spot with the first-team defense. Fellow freshman Regen Terry worked at defensive tackle with the second unit after lining up at end earlier in camp.

* Fisch’s wife, Amber, and their daughters attended practice. They have officially moved to Tucson from New England. “It’s exciting that they’re here,” Fisch said. “They’re here for good, so they’ll be at all the practices.”