Differing state and WKU quarantine guidelines are confusing, but it has to be done 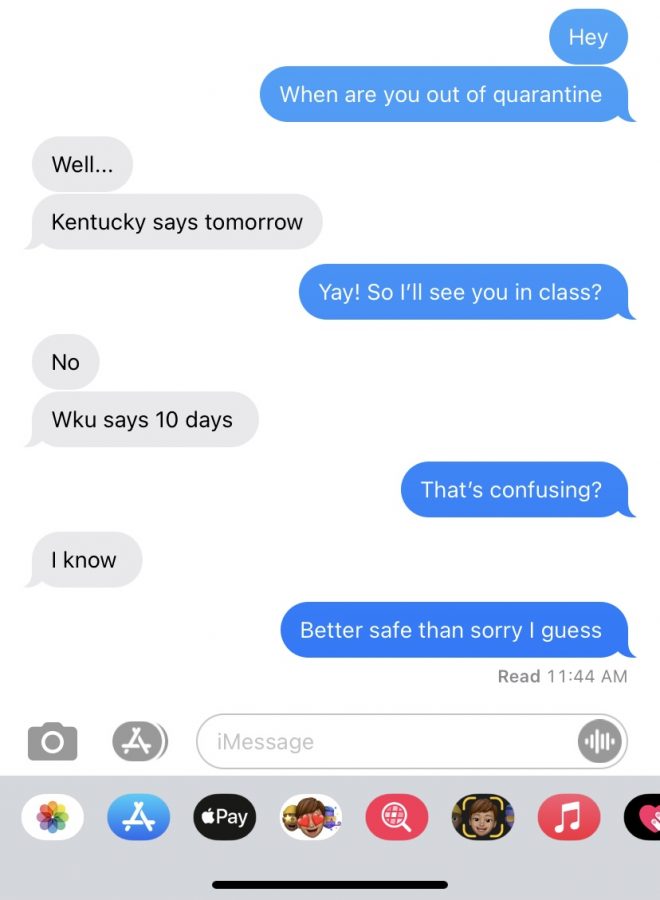 The issue: WKU’s quarantine timeline for close contacts to positive cases differs from what the state of Kentucky’s requires, creating confusion between students.

Our stance: Differing messages from the state and WKU are frustrating, but we can’t expect WKU to do anything differently.

After the Centers for Disease Control and Prevention released new quarantine guidelines for those who come into contact with someone positive for COVID-19, the state of Kentucky and WKU similarly updated their policies.

A 14-day quarantine after exposure to a positive person is one of the safest steps to take, but the CDC’s new recommendations, which the state of Kentucky ultimately followed, includes shorter options to increase the public’s willingness to quarantine.

Without a test, the state of Kentucky recommends a 10-day quarantine following exposure. A shorter option is also outlined, where a contact can end their quarantine after seven days, as long as they have a negative test result, conducted the fifth day after exposure.

If that sounds confusing, that’s because it is.

time from 14 days to 10 days. The university’s COVID-19 task force made the decision to opt for the 10-day standard, said Bob Skipper, director of media relations.

“That aligns with the 10-day period for those with a positive test and still provides an adequate measure of public safety,” Skipper said in an email. “We hope the reduction from 14 to 10 days, with the added negative test and absence of symptoms, will encourage more who are potential contacts to quarantine.”

This leaves WKU students exposed to COVID caught in the intersection of state guidelines and WKU’s policy. Per state recommendations, someone who tests negative one week after exposure is considered cleared and can reenter the Bowling Green community, but this same person cannot return to campus until three days later.

This process is frustrating for the students it affects, but ultimately, we can’t expect WKU to do anything differently.

As WKU begins its own contact tracing after the local health department stopped contacting close contacts for each positive case, it’s easier and safer to apply a blanket 10 day policy to everyone, both positive cases and contacts.

In times as uncertain and seemingly never ending as this, everyone needs something that no institution can provide. In a once-every-hundred-years pandemic situation, “just to be safe” precautions from WKU are a necessity.