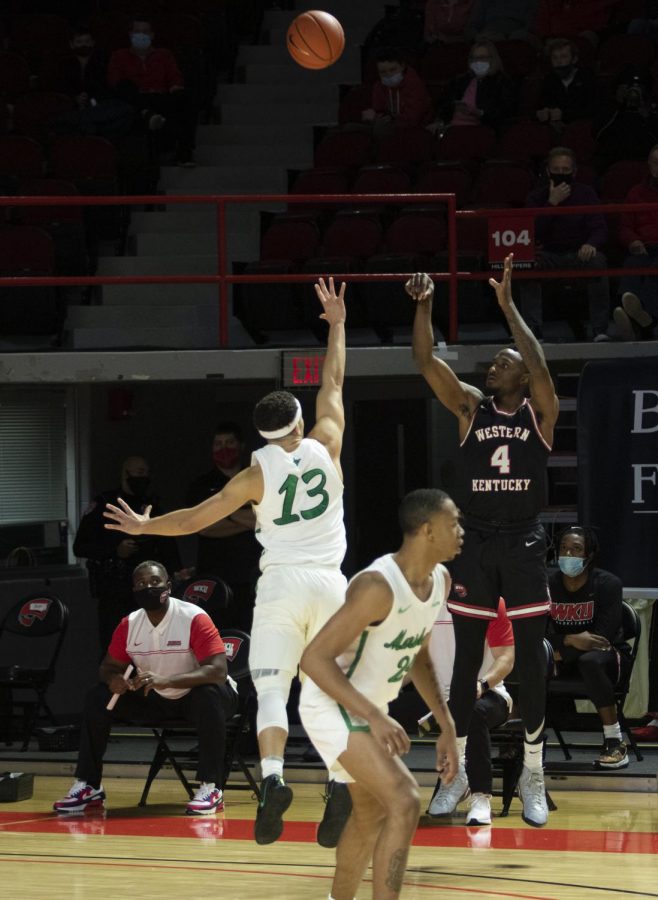 “When your teams are player driven, those are your best teams,” head coach Rick Stansbury said. “We can’t coach every possession from the sideline, in particular with the mask on. If we don’t have one guy that can do it we have to do it collectively.”

It was a big weekend for guys like Josh Anderson, Carson Williams and Charles Bassey who set a career high for rebounds in game one. All were big when it came to the momentum swinging in WKU’s favor to pull out close victories against its Moonshine Throwdown rival.

WKU will wrap up their three game road swing against conference rival Middle Tennessee State University. The Hilltoppers have won the last meetings between the conference opponents.

The last time these two teams met on the court, the Hilltoppers took home the win 69-53. Senior Taveion Hollingsworth led the team in scoring with 18 points on 5-of-9 shooting, 2-of-2 from behind the arc, and had five rebounds, two assists and three steals.

The Blue Raiders are currently last in the East Division of Conference USA, sitting at (3-7), (1-3, C-USA) after dropping both games to Southern Mississippi on the road.

MTSU is led by redshirt junior Jordan Davis and, recently inserted into the starting lineup, junior Dontrell Shuler. Both players average about 11 points a game and are the only two on MTSU’s roster who average double digit points.

“We haven’t looked a lot at Middle Tennessee yet, we take it one game at a time,” Carson Williams said after game two against Marshall. “We’ll try to figure out their strengths and weaknesses and try to attack them based on that.”

MTSU doesn’t get to the free throw line that much, getting to the charity stripe 127 times this season hitting 90 of them for 71%. That’san area WKU can take advantage of since part of the Hilltoppers identity is shooting more free throws than its opponents even attempt.

MTSU has the worst team field goal shooting percentage out of all of the teams in the conference but WKU has the worst defense, allowing teams to shoot an average of 45% shots per game from the field, so something has to give.

A big difference in this year is having Charles Bassey on the court. Especially coming off of a series where he had a career high in rebounds for a game, he can possibly do the same against a team who’s leading rebounders are both 6-foot-6.

“Going into there, I’m going to be even more aggressive than I was in the previous game and today’s game,” Bassey said after game two against Marshall. “We’re just gonna go in there and do what we do. Go in there and win.”

As WKU gets deeper into the schedule, cutting down the turnovers will be essential for this team if it wants to make a postseason run, and that can start this weekend against its ‘100 Miles of Hate’ rival.

The Murphy Center Complex will be the home for this series as game one takes place on Saturday at 4 p.m. followed by a 1 p.m. start on Sunday. Game one will be shown on ESPN+ while game two will be shown on the CBS Sports Network.