Abdelgawad lifts WKU over Charlotte in historic triple overtime affair: ‘I was playing hard just for him’ 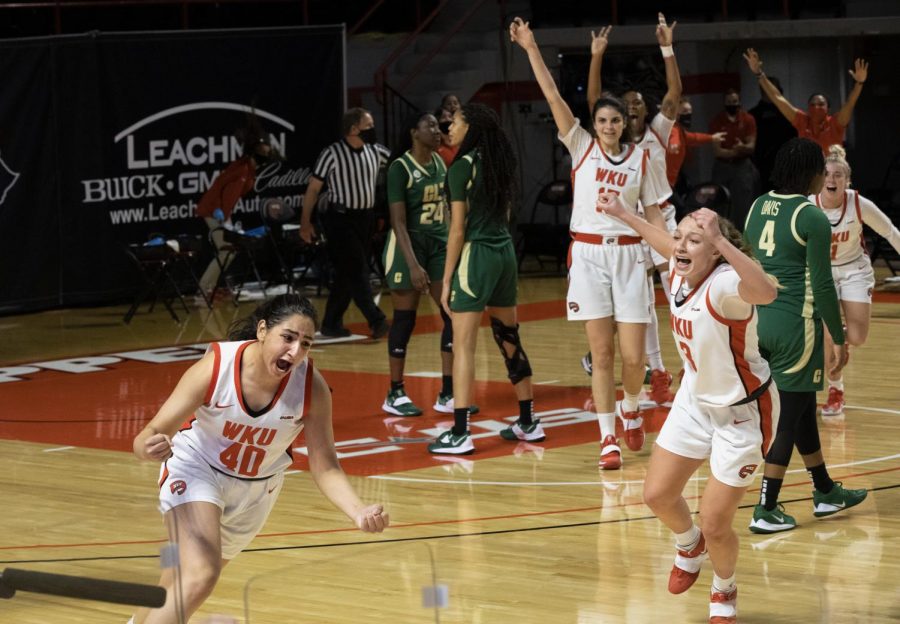 Lady Topper Meral Abdelgawad (40) celebrates her game winning shot against the Charlotte 49ers in WKU’s first ever triple overtime with a final score of 100-99 on Jan. 29, 2021.

Lady Topper junior Meral Abdelgawad hit the game winning shot at the buzzer in the third overtime to lift her team to victory. Abdelgawad said she was thinking about her dad, who passed away last summer, when she made the shot.

“He’s always with me every game that I play,” Abdelgawad said. “I promised my dad before he died that I would play every game hard just for him.”

Abdelgawad capped off the night with 10 points and 11 rebounds for her third double-double this season. It was the first time in program history the Lady Toppers went to triple overtime.

“There’s no kid on this team that works harder, gives more effort every day,” Collins said of Abdelgawad. “There was one time where I called her over and said ‘you are our best energy player, you are our best rebounder.’ It’s really great to see her have that success.”

Six Lady Toppers finished in double digits at the end of the night. Head coach Greg Collins said he expects his bench players to step up in the next game against Charlotte.

“I’m thrilled that the ball went in, I’m thrilled that Meral [Abdelgawad] put the ball in,” Collins said. “We were planning for a three, not necessarily that deep of a three, and we’ve run that play over the last eight or nine years. I felt confident we were going to get a decent three.”

After the Lady 49ers went up on WKU, nobody was expecting a three at the buzzer to cap off the night.

WKU won the opening tip off but turned the ball over to Charlotte who would knock down a three pointer to strike first. Senior Raneem Elgedawy scored WKU’s first points at 8:13 of the first quarter on a layup.

By the 2:48 mark of the quarter, WKU freshman Ally Collett nailed a triple to make it a one point game. At the end of the first frame, WKU trailed Charlotte 17-20.

At the 3:31 mark, WKU managed to end their scoring drought as freshman Hope Sivori drove to the rim to make it a five point game. Collett and senior Fatou Pouye knocked down two consecutive three pointers with roughly a minute to go to make it a close game.

An explosive last minute of play gave WKU a confidence boost as they managed to force Charlotte to turn over the ball several times and was 3-of-3 from field goal range. The Lady Toppers trailed the Lady 49ers 37-39 at halftime.

The Lady Toppers best performer was Elgedawy, who dropped 14 points and had five points by halftime.

Pouye kicked off the third quarter as she drove to the basket to tie the game. However, Charlotte knocked down a three pointer their next possession.

With less than five minutes left in the third frame, Collins called a timeout as WKU was 1-of-8 from the field and had allowed their opponents to extend their lead to six. With 3:30 on the clock, a 6-0 run by Charlotte forced Collins to call another timeout.

WKU went on a 6:07 scoring drought prior to the end of the third quarter. However, with 56 seconds in the quarter, WKU went on a 7-0 run. The Lady Toppers trailed 56-49 going into the final frame.

Early in the final frame of play with 6:33 left in regulation, WKU cut the lead down to three points as Charlotte was on a scoring drought for the past three minutes. Collet drained a three pointer, inching closer to breaking her previous career record of 12 points. WKU shot 3-of-3 from the field as redshirt sophomore Myriah Haywood added a triple to make it a one point game.

Charlotte extended their lead to five after a timeout, but Pouye would score off a fast break at 3:32 in the game to make it a two point game. By 2:31, Sivori drove to the rim to put the shot through and draw the foul. WKU trailed by one. Charlotte had no field goals for the last 2:38, while WKU was 6-of-8.

With a minute left, WKU took the lead by three. However, with 51 seconds, Charlotte drained a three pointer to tie the game 74-74. Charlotte’s following offensive push resulted in an out-of-bounds ball, which was last touched by WKU. With four milliseconds on the clock, Charlotte missed the final shot in regulation to put the game into overtime.

WKU won the overtime tip off and Elgedawy would drill a jumper shot to beat the clock, taking a 76-74 lead. With 3:18 remaining in the extra frame, Charlotte drilled a triple to take a one point lead, but WKU would follow by drawing the foul and Sivori shooting 2-of-2 on the charity stripe.

With 1:26 left, WKU got possession following Charlotte going one-of-two from the line. With 11 seconds left in the first overtime, WKU trailed but had the ball. With four seconds, Haywood was fouled and went to the line where she would make both free throws to tie the game with 4.8 seconds left on the clock. Haywood hit both shots, taking WKU into the second overtime.

Charlotte struck first in the second overtime, then Collett drilled a three pointer with 4:08 on the clock to take the lead, but by 2:38, Charlotte led by one point again.

Sivori would foul Charlotte and by 2:30 Charlotte had put another two points on the board from free throws. With 45 seconds left, WKU trailed by three as Collins called a timeout. Following the timeout, WKU nailed a three pointer.

Charlotte shot on net three times but couldn’t get it to go in. Sivori would receive the ball from across the court to make two points off a fast break to take the lead. However, Charlotte would score with four milliseconds remaining to push the game into a third overtime.

Charlotte made two free throws early, but WKU would draw the foul and put two points on the board off of free throws. Charlotte and WKU were both tied with 1:48 on the clock as Sivori went to the line to shoot two. Sivori would make her second to put WKU up by one. Haywood would also put two in, but Charlotte would respond by drilling a three pointer to tie it with less than a minute.

In the final 22 seconds, Charlotte would get possession off of a jump ball and would take the lead with two seconds left.

However, WKU would get the last laugh as Abdelgawad would get the ball and nail the long three at the buzzer to snap Charlotte’s undefeated conference record and to put WKU up 1-0 on Charlotte to begin the weekend.

WKU will take on Charlotte again tomorrow in Diddle Arena at 4 p.m.