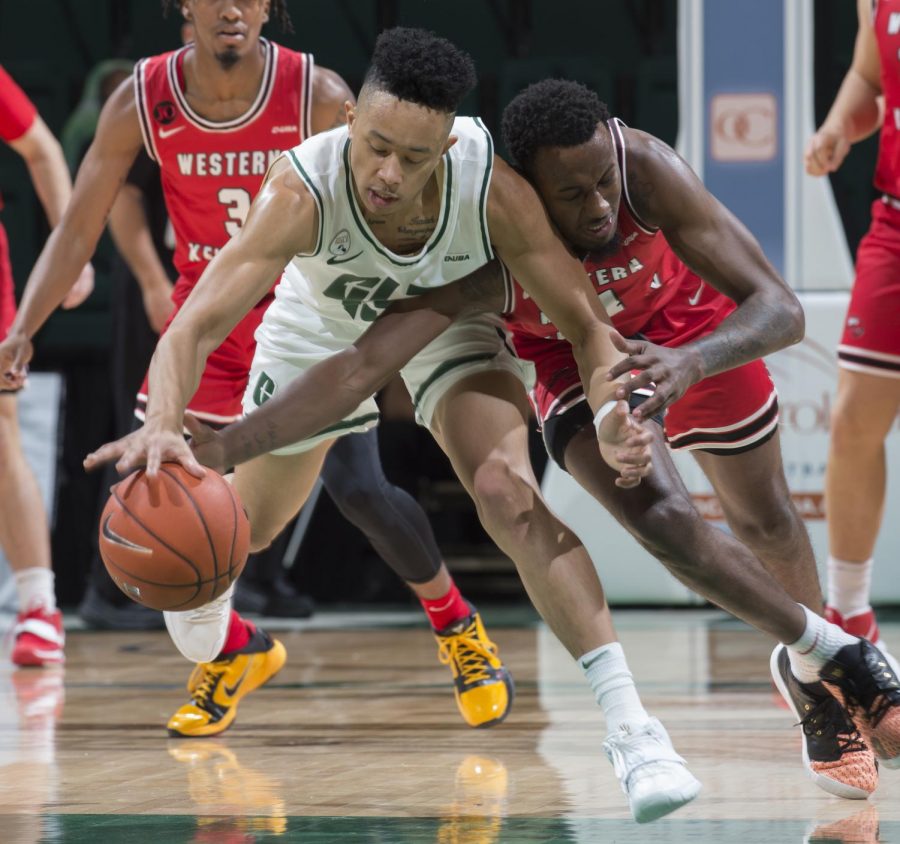 Redshirt senior Jordan Shepherd (left) and senior Josh Anderson (right) fight for a loose ball in the first Conference USA matchup of the 2020-21 season. WKU came out on top 67-63 over the 49ers.

“I thought the first half we turned the ball over and that was the difference in the game,” head coach Rick Stansbury said postgame. “We gave them ten points in transition. We took care of the basketball in the second half and we were much more efficient offensively.”

The Hilltoppers stepped back on the court after not playing a game for over a week and it showed early in the game. WKU had four points and started 1-of-5 in the first five minutes of play compared to the 49ers 10 points, and 4-of-6 from the field.

“The one thing about our team that is going to help us is our bench,” Stansbury said. “Our bench comes in and adds to our game.”

The Charlotte defense held the Hilltopper offense in check forcing six turnovers, eight minutes into the game. The 49ers took advantage of it on the other end with sophomore guard Brice Williams scoring 11 points and shooting 4-of-4 in those eight minutes and ended with 17 at the break.

Ironically, WKU was able to keep the game within reach by causing turnovers and scoring a lot of its points in transition, on the fast break with 14-of-28 first-half points coming off of turnovers.

Charlotte shot 4-of-9 from behind the arc while WKU shot 1-of-9 with the one-make coming at the buzzer from junior forward Luke Frampton in the corner.

With 7:32 left in regulation, Frampton left the court to get his right ankle wrapped. According to Stansbury following the game, Frampton said he was ok to play.

The teams combined for 19 turnovers in the first half with the 49ers having a 36-28 advantage.

WKU started the second half with more fire and energy with two dunks courtesy of senior Josh Anderson and junior Charles Bassey, starting 3-of-3 bringing the Hilltopper deficit down to 40-38.

Charlotte would go on to take a seven-point lead before WKU would go on a 9-0 run, all from three-point shots, to take a 54-52 lead, its first lead since the 17:57 mark of the first half.

Up until this point, the Hilltoppers had held the 49ers to shooting 31% for the half compared to its 63% in the first half.

Charlotte went back up 59-58, with under two minutes to go before sophomore Jordan Rawls hit his first shot of the game from beyond the arc to take the lead. A Bassey putback extended their lead to three with 36 seconds remaining in regulation.

Charlotte would miss on the other end and foul senior Taveion Hollingsworth, who hit one of two free throws. Sophomore Jahmir Young ran down the court and hit a quick three-pointer to bring the Charlotte deficit down to one 63-62.

McKnight went back to the free-throw line, hitting both free throws and ending in the Hilltoppers 67-63 win.

“It gave us a whole lot of momentum,” freshman guard Dayvion McKnight said. “I feel like we just needed to get over the hump that we were against, and to bounce back and get the win.”

Hollingsworth led the team with 14 points and three rebounds, shooting 8-of-10 from the free-throw line. Josh Anderson finished with nine points, shooting 4-of-4, and three steals. McKnight had 12 points with six assists and four clutch free-throws.

“It’s a good opportunity for us – that’s two straight road games to start the conference off so that’s big to get the first one we just have to get the second one,” Hollingsworth said about playing in back-to-back games.

For the 49ers, Jahmir Young led the team with 23 points, six rebounds, and three assists. Brice Williams ended with 21 points and seven rebounds while shooting 8-of-9 from the field.

“Now what we have to find a way to do is something none of us have ever done – as players and coaches turn around and play a second night,” Stansbury said. “There isn’t a celebration, you have to take care of that first game, and we have to find a way again to get back ready and do it tomorrow night.”