Track and Field to begin its spring season 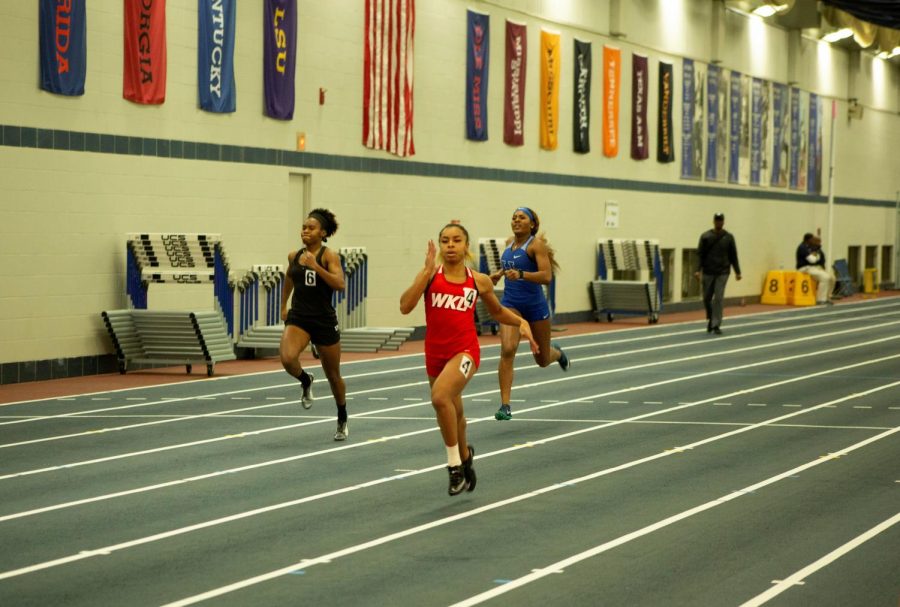 Alexis Williams running during the Jingle Bells Open at the University of Kentucky on Dec. 6, 2019.

The WKU track and field coaching staff, as well as a handful of track and field athletes, shared their hopes and goals for the upcoming season in a press conference Wednesday morning ahead of their first meet of the year on Saturday.

Chumbley made it clear that the track and field squads were excited to be competing again after losing out on part of last season due to the coronavirus. He acknowledged that the situation hasn’t always been easy for his athletes, and he brought up some of the challenges they have had to face while dealing with the effects of the pandemic.

“The student athletes have done a phenomenal job – they train as hard as they can, they train on their own, and they go out and do what we asked them to do even while wearing a mask,” Chumbley said. “But for the student athletes it’s hard, they’re losing out on some of their college experience.”

Chumbley went on to say that he feels his athletes are phenomenal due to their lack of complaining while adjusting to new practice protocols.

Sophomore Alexis Williams explained that there is a noticeable difference in the squad’s training regimen this year compared to other seasons.

“This year it was more of a gradual increase in training instead of last year where [Ansley] just threw everything straight at us,” Williams said. “We’re still kind of getting back into the flow of the hard training, but I still think that we’re definitely ready for this meet this upcoming weekend.”

The coaching staff explained that while they do want their athletes to be competing at the top of their game as much as possible, their main goal this early in the year is to keep everyone safe and healthy.

“Right now we’re just trying to get [our athletes] into a routine, they’re just coming back from being at home and we know those little routines we have established will get shaken up,” Brooks LeCompte said. “If they can make it through these first couple weeks of training and get back into the weight room, yeah they’re going to be sore, but hopefully we prevent injuries and build a foundation for the season.”

“The protocol keeping them healthy is very important – and again, performances will come, we’ll get plenty of opportunities hopefully to race,” LeCompte said.

Tosha Ansley echoed LeCompte’s words, emphasizing how important it will be for the athletes to take care of themselves in order to compete to the best of their abilities.

“As far as goals, I just want them to finish, and to maintain a good attitude as we’re going through this,” Ansley said. “We’re going to get it done regardless, but we’re going to have to push through.”

WKU’s first meet of the season will take place in Birmingham, Ala., on Jan. 16 at the Vulcan Invite against the University of Alabama.