HS Girls Basketball: Cumberland Valley’s Abbie Miller wants to be ‘something special’ at Shippensburg University like her Hall of Fame aunt 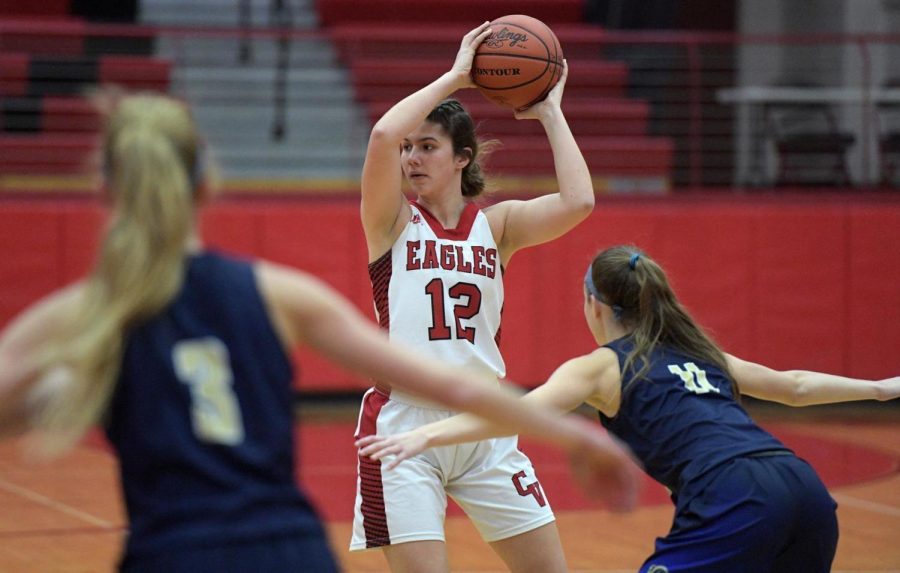 Shippensburg University knows a thing or two about Millers who like to rebound.

From 1974-78, Kristi Miller Jordan grabbed 526 rebounds for the Raiders women’s basketball team on the way to a Shippensburg Hall of Fame career.

That number, plus her 10.1 rebounds per game, were SU records when she graduated — an era in which the team played just 52 games.

She finished with 547 points, averaging 10.5 a game, and was a letterwinner on SU’s field hockey and lacrosse teams.

Now it’ll be Jordan’s niece, Abbie Miller, who hopes to provide similar production on the glass and with her shooting.

Miller announced she will be joining the Raiders in a social media post Saturday morning, becoming the latest in a long line of SU students from her family, a list that includes her aunt and both parents.

“I’m just hoping I can follow in her footsteps but make my own path at the same time,” Miller said via Twitter direct message. “I want to be something special and push myself just like she did. Rebounding definitely runs in the family haha.”

Miller and Jordan, who is Miller’s dad’s sister, are close. Her aunt attends “every single high school basketball game.” And Miller drops by her classroom at Cumberland Valley High School to “talk to her about life all the time.”

“She was definitely a tough athlete and competitor,” Miller said.

Miller is no slouch on the hardwood herself. She’s averaged 9.2 points (693 total) and 6.5 rebounds (487) during her three-year varsity career and helped the Eagles win the 2019 District 3 Class 6A championship.

During the fall, she helped the CV girls soccer team to its 16th District 3 title.

Miller’s 2020-21 basketball season is currently on pause due to the state’s emergency mitigation efforts aimed at curtailing the COVID-19 pandemic. The Eagles are expected to resume play around Jan. 9, after the mandate is to be lifted.

Although being a legacy was enticing, Miller said her family was supportive of any school she wound up picking.

“All of the wonderful things I’ve heard about Ship from them definitely helped,” she said.

Miller picked the Raiders, who are led by 22-year veteran coach Kristy Trn, over offers from Millersville, IUP and Washington & Jefferson. She intends to major in early childhood education.

She was accepted into the honors college and was offered partial academic and athletic scholarships, she said.

“Ship felt like home when I was on campus,” she said. “The energy and atmosphere felt perfect and the distance from home was perfect so that my family can still come see me play. The coaches and players were so welcoming and helpful throughout the recruiting process. My parents also went there so being a legacy would definitely be cool and the fact my aunt was a player there I thought was a really cool bonus so that I could continue a family tradition.”

Finding a family fit was the most important factor, Miller said. She might find that on a roster filled with players she knows quite well from her time on the court.

The fact that she has some familiarity with the roster was “definitely a deciding factor,” Miller said.

“Aunbrielle Green and Ashley Adams were super kind when I was on my visit and Olivia Gregory was so helpful to talk to about the honors college. Knowing that I’ve played against some of the girls and now I’ll be playing with them was definitely a cool feeling.”

She’ll join an SU team that has been a handful of late in the PSAC. Ship went 21-9 (17-5 PSAC) last season and lost in the conference semifinals.

Trn is in her 22nd year in charge of the Raiders, where she’s the program’s winningest coach at 362-238 in her career, among the Top 30 active coaches in wins in Division II.

“I’m most excited for the coaches to push me to my highest potential academically and athletically,” Miller said.