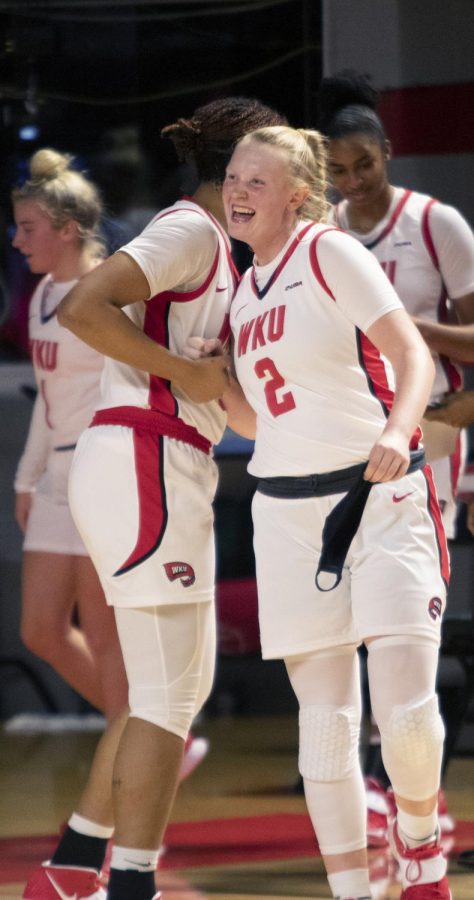 Freshman Jenna Kallenberg (2) celebrates a win with her teammate after the game against the Bellarmine University Knights on Wed. Dec. 16, 2020. The Lady Toppers won 82-49.

WKU’s offense was explosive as they scored a total of 82 points on Bellarmine and were unstoppable on rebounding the ball on offense. WKU’s efforts held the Bellarmine Knights to only 49 points.

“Hope always had that sense of pushing the ball and kind of getting out. In Little Rock, she kind of grew into that,” head coach Greg Collins said.

Collins also communicated how pleased he was with freshman Ally Collett’s performance as well as the players that came off the bench.

“It was really good to see kids like Fatou Pouye to score,” Collins said. “I was really proud of some of the kids who came off the bench.”

Collins was happy with freshman Jordan Smith’s performance. Smith came off the bench to help the Lady Toppers with rebounding the ball.

Myriah Haywood was another addition assisting the team tonight.

“I knew early on that Myriah was our most confident player with the ball,” Collins said.

Collins said the victory tonight was due to the fact that his players were moving the ball around more.

Hope Sivori talked about how the game was a huge confidence booster for her and her teammates.

“This game was really important to us,” Sivori said. “This was really just going to be a confidence booster.”

Sivori followed by saying she was confident in achieving victory over Bellarmine due to the fact that Bellarmine was only recently declared a Division I school.

Kicking off the game the tipoff went to Bellarmine, which resulted in the first bucket of the game for the Knights, freshman Ally Collett returned fired sinking a three-point shot.

This was the first of many long shots from WKU as they took a commanding lead.

Hope Sivori showed improvement as she sunk her first three-point shot as a Lady Topper. Sivori was 3-13 from the field in the last two games.

Shortly after the two-minute mark of the first quarter, Bellarmine called a timeout as WKU had was on a 5-7 run prior to that.

At the end of the first quarter, WKU had a 9 point lead over Bellarmine as Collett had nine points and Sivori had five.

At the start of the second quarter, Bellarmine started to force turnovers and put the WKU lead to only three points in the first minutes.

However, as the quarter progressed, WKU continued to force points on the board and managed to steal the ball multiple times.

Around the two minute mark, Bellarmine managed to make it a one-possession game, but Myriah Haywood wasn’t having it.

To conclude the opening quarter, Collett knocked down another three-pointer in the final seconds to put WKU up by 12 points.

By halftime, Ally Collett had 14 points to lead the team in scoring. Hope Sivori and Meral Abdelgawad both had eight points to tie for second place in scoring for the Lady Toppers.

By the third quarter, WKU started to overwhelm the Bellarmine Knights as they extended their lead to 19 points and forced the Knights to turn the ball over. Bellarmine ended up having 17 fouls on the night, WKU took advantage of that.

The Lady Toppers were unstoppable in the third quarter as they retained their lead and ended the quarter with a 20 point lead.

Bellarmine was unable to make adjustments, which is why their coach had the team adjust to a full court press.

In the first minutes of the fourth quarter, WKU further overwhelmed Bellarmine with their offense as the Lady Toppers expanded their lead to 24 points. Haywood had 12 points while Abdelgawad had 11 points to keep WKU well ahead of the Knights.

Fatou Poyue also took control in the final quarter as she caught and shot the ball several times as the full-court press for Bellarmine was unable to stop WKU.

Nearing the end of the game, Collins took out most of his starters as WKU had already achieved victory with a commanding lead over the Knights.

Collins said in the press conference following their victory that the team is planning on watching film for their matchup against Mercer.

He also said that the team will be working on rebounding for their game against Mercer on Friday.

The Lady Toppers (1-3) will appear in Diddle Arena again on Friday night as they play the Mercer Lady Bears (3-3) at 6 p.m.