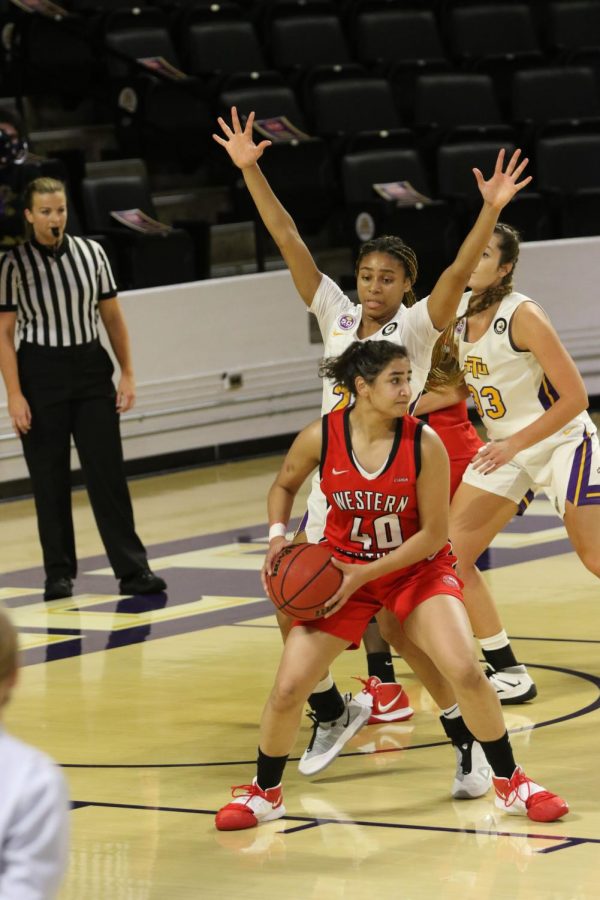 Junior Meral Abdelgawad looking for a pass on Dec. 20, 2020 at Tennessee Tech. The Lady Toppers went on drop the game 73-59.

“Right now, we still play very frantic on the court,” head coach Greg Collins said. “We’re not strong enough and that shows up on the boards. Until we get a lot tougher on those boards and get a lot more settled with the ball we just aren’t going to beat anybody.”

Collins said there were also other issues with the team’s performance today including rebounding, boxing out, and turning the ball over.

“The turnovers are the ultimate story,” Collins said. “We’re not gonna get shots if we’re just giving the ball away.

Senior Fatou Pouye was the most impressive Lady Topper player as she dropped 19 points, had six rebounds, and one assist. Her career-best outing as a Lady Topper.

“Well she’s growing, she’s settling down, she was eight for eleven from the field and that’s what we need,” Collins said about Pouye’s performance.

Redshirt sophomore Myriah Haywood was the next impressive player with 14 points, three rebounds, and one assist, also a career-best performance for her.

The starting tip-off went to WKU and Pouye scored the first basket. However, the Lady Golden Eagles quickly returned fire and put 5 points on the board.

By 4:38 in the first quarter, WKU was on a 5-0 run. However, the Lady Golden Eagles were returning fire to keep the score close.

At the 2:23 mark of the first quarter, both teams were tied at 19 points each. Pouye was leading the team with seven points, including a three-point shot.

The second quarter started with a layup from Tennessee Tech to give the Lady Golden Eagles to go up by two points.

The Lady Toppers trailed by 10 points going into halftime. The Lady Golden Eagles held WKU to six points in the second quarter and scoreless for the final 2:16 of the first half.

WKU also committed 17 turnovers and 11 fouls in the first half. The Lady Golden Eagles shot 5-6 on the free-throw line and 6-17 from three-point range to maintain the lead over WKU.

Going into halftime, Abdelgawad, Pouye, and freshman Ally Collett all tied for scoring with seven points.

“In an effort to calm us down, we subbed and we didn’t get any more production,” Collins said about the second quarter.

The third quarter of play started off with a three-point shot from Tennessee Tech adding to their lead to give them 40 points, but Haywood returned fire to give WKU their first points of the third quarter to make it 40-29.

However, WKU continued to trail Tennessee Tech, despite making four of their last five shots by the five-minute mark of the third frame.

Tennessee Tech had extended their lead to 15 points and made a comeback for WKU unlikely.

The Lady Toppers were constantly fouling and turning the ball over, which resulted in fewer scoring opportunities. WKU additionally had issues rebounding as Tennessee Tech constantly found the basket by grabbing offensive rebounds.

By the end of the third quarter, WKU was trailing Tennessee Tech 61-45.

The Golden Eagles committed foul 14 on the game in the fourth quarter as WKU tried to tighten their defense, but to no avail.

Tennessee Tech continued to keep their lead as WKU tried to make it a close game.

WKU was unable to succeed as the majority of offensive rebounds went to Tennessee Tech and further extended the Lady Golden Eagles lead.

“Teams are aggressively pursuing the ball and we’re not,” Collins said. We’ve got to get that cleaned up and we have to settle down with the ball and move that ball and get it to players that score the best.”

The final score was 73 to 59 as Tennessee Tech walked away with the win over WKU.

“Defense, boxing out and guarding – being able to move our feet without fouling,” Haywood said postgame about what to work on prior to Conference USA play. “We’re probably going to work more on defense than offense for the next couple of practices.”

The Lady Toppers’ loss to Tennessee Tech concluded their non-conference schedule for the rest of the calendar year. WKU is scheduled to kick off C-USA play for the 2021 season at home on Jan. 1 against Charlotte with a 6 p.m. tipoff.