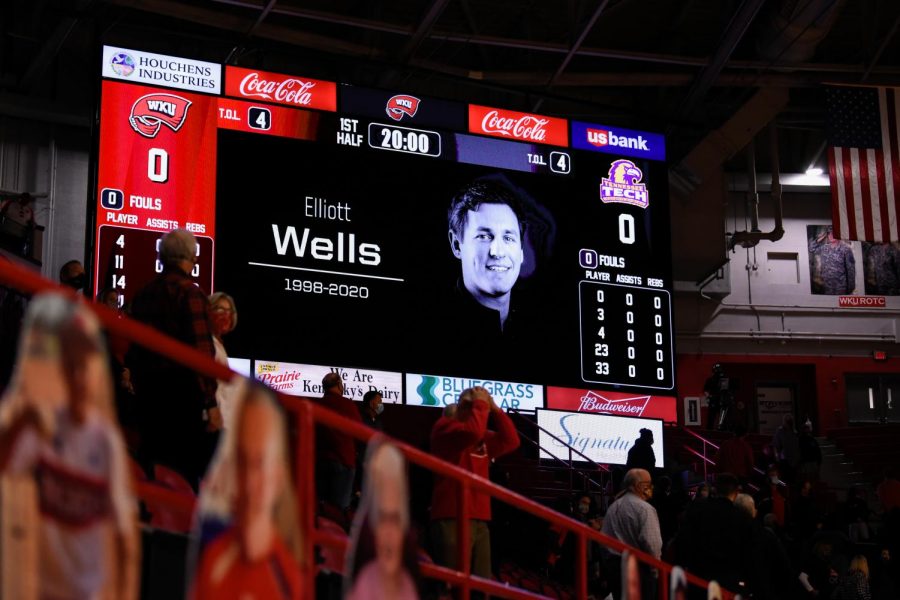 WKU Athletics honored the passing of Elliott Wells, an employee of Athletics and a former Herald staffer, during the Dec. 22 game against Tennessee Tech.

Prior to the game, WKU announced their starting center would not play as a precaution because of back spasms stemming from an elbow in the back during Saturday’s win at Alabama.

Before the tip, WKU honored Elliott Wells, a former Herald staffer and intern in the athletic department this fall with a moment of silence.

“What a horrible loss, what a fine young man,” head coach Rick Stansbury said. “I always enjoyed Elliott in a press conference. He’d always have an intelligent basketball question. He was a pleasant young man, and our thoughts and prayers are with his family.”

Redshirt junior Luke Frampton led all scorers on WKU with 22 points and shooting 6-9 from distance, his highest totals as a Hilltopper.

“I didn’t feel any pressure at all, I’m just doing whatever I can to help the team win,” Frampton said. “It’s not about me, it’s about the team, as long as we win I’m happy. I’m sure everybody else is.”

Senior Josh Anderson had 14 points on 5-6 shooting with six rebounds and four assists. Anderson paced the respective teams in dunks with three.

Frampton entered the starting lineup in place of Bassey and instantly made an immediate impact, scoring the team’s first six points with two three-point shots.

The Hilltoppers came out quick and efficient with an early 13-4 lead at the first media timeout, shooting 50% from the field and behind the arc and 3-4 from the free-throw line.

WKU kept the pressure on the Golden Eagles forcing them to take contested shots that led to easy points and a 9-0 run for the Hilltoppers.

The Hilltoppers played the last part of the half on cruise control, only hitting two of its last eight shots, but ended the half on a high note with a Kenny Cooper three-point shot as the buzzer went off, taking a 36-25 lead into the locker room.

Frampton led WKU in scoring at the break with eight, shooting 2-4 from three-point range and 2-4 from the field.

Senior Josh Anderson had two dunks in the first half playing 15 minutes. The guard was dominant in the paint the entire first half hungry for baskets.

Hilltoppers started the second half attacking the rim, with Anderson continuing his high flying play with a putback dunk 37 seconds into the half.

The two teams traded buckets scoring a combined 26 points within the first four minutes of the second half. From there, the play on the court became sloppy from both sides as the teams looked out of sync.

Despite that, WKU stayed aggressive, drawing foul calls, getting to the line, and getting into the bonus with 11:30 left in the half. WKU had complete control from that point, getting its lead up to as much as 20.

Frampton sank his sixth three-pointer of the night with 5:10 remaining in the contest, his highest total as a Hilltopper. He shot 5-5 against Gardner-Webb on Dec. 10.

That was all she wrote from there as the benches cleared and the dominant win in sight for the Hilltoppers.

“We just tried to stay focused for the game and come out with energy,” Hollingsworth said. “[Now] everybody gets to go home and be with their families for a couple days.”

WKU had nine turnovers and only committed one in the second half. WKU finished with 17 fast break points, 32 points off the bench, and outrebounded TTU 41-32.

WKU will be off until Jan. 1-2 when they travel to Charlotte (4-3) to open the new year and conference play.

“They lost a couple of pieces off of last years team,” Stansbury said of Charlotte. “Their style makes it difficult. They pack that lane.”

Tip times for the back-to-back C-USA games are slated for 3 p.m. CT.