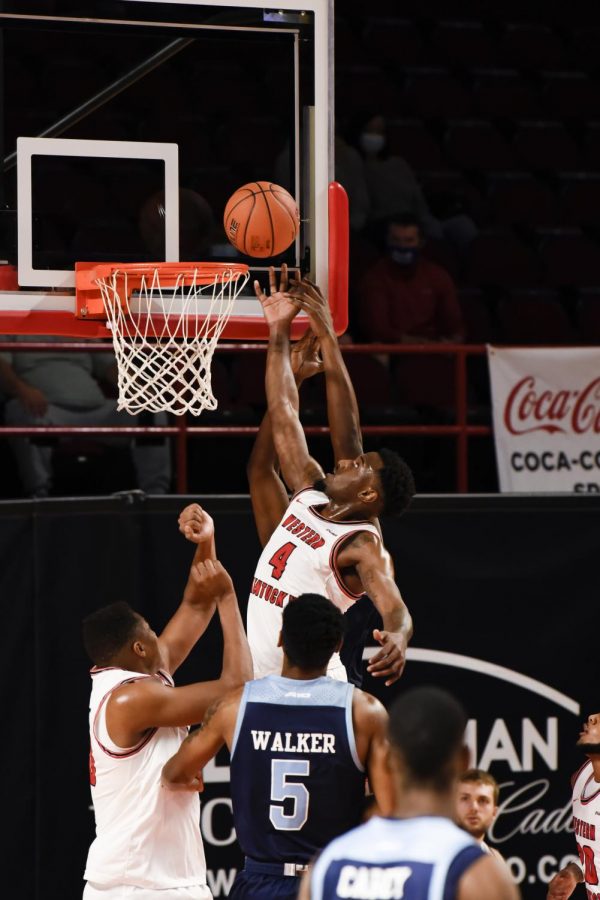 Both programs started off sluggish in the first half, with the first field goal of the game being scored three minutes in by senior Taveion Hollingsworth.

WKU began the game outscoring the Rams 5-0 prior to the first media timeout of the game. Seniors Taveion Hollingsworth and Josh Anderson sank two buckets early to take the early lead.

Rhode Island had a tough time with the Hilltoppers defense, scoring its first points of the game with 14:22 left in the first half.

The Rams started 1-10 but WKU couldn’t take advantage as they started 3-10. As Bassey and Hollingsworth checked out of the game, the Rams went on a 6-0 run to bring the Hilltoppers lead down to two.

In a turnover happy first half, Rhode Island was able to take its first lead 21-20 with 6:17 to play in the opening half after creating turnovers and running fast breaks with redshirt sophomore Jalen Carey and redshirt junior D.J. Johnson carrying most of the load.

WKU took control for the rest of the half, going on a 13-6 run to end the half with a six-point lead.

Both teams combined for 22 turnovers in the first half, splitting them with 11 each.

It wasn’t Bassey or Hollingsworth leading the team, but senior Josh Anderson who was the only Hilltopper in double-digit scoring at the half with ten.

“It’s been big, just how we can close out games,” Anderson said. “If it’s a close game or not we have players who can come in and make plays whether it is the starting five or not so I feel like that’s big for our team.”

WKU came out in the second like they did the first, playing great defense highlighted by the national leader in blocks, with Bassey having four within the first five minutes.

The Hilltoppers turned that defense into offense, scoring on the fast breaks and extending their lead to a ten-point lead after redshirt senior Carson Williams made a layup.

Bassey and Hollingsworth checked out of the game again, making the Hilltopper offense stagnant and allowing the Rams to climb back within four points with nine minutes left to go.

The two stars checked back in on the tail of Rhode Island’s 9-2 run, with the Hilltoppers having a 51-50 lead at the eight-minute TV timeout.

The teams began trading buckets and the lead for the final five minutes of the game. A blocked shot from the rams led to an easy layup on the other end to tie the game.

With 20 seconds left, a putback off a missed layup by Bassey put the Hilltoppers up two. On the other end of the court, Jalen Carey drew a foul on Bassey, with five seconds left, making him foul out. Carey missed the first free throw but hit the second; WKU still led 66-65.

The Rams sent Hollingsworth to the free-throw line as he drained both to put WKU up three.

Then WKU sent the Rams to the free-throw line with 1.9 seconds left, Hollingsworth rebounded the miss, ending the game.

“I like the last few games I have had good games,” Anderson said of his play this season. “I feel like I am getting back into the flow, you know, and not play for so long. It’s definitely big for myself.”

WKU will have a nine day break before taking on Tennessee Tech (0-5) next Tuesday. The two teams met last year with the Hilltoppers taking the win 76-64.

Four Hilltoppers reached double-digit scoring in that game last year with Bassey and Carson Williams leading the way with 16 points each. WKU shot 19-26 from the free-throw line compared to the Golden Eagles 4-6.

Tipoff for Tuesday’s game inside Diddle Arena is set for 6 p.m.