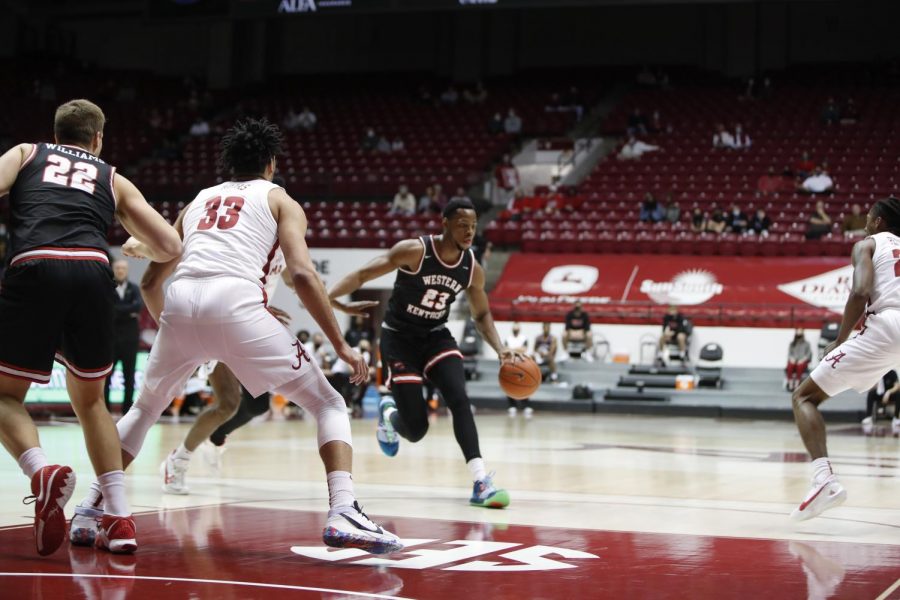 Junior Charles Bassey driving the basket at Alabama on Dec. 19, 2020. The Hilltoppers went on to win 73-71 over the Crimson Tide.

WKU (6-2) escaped Tuscaloosa with a 73-71 victory, winning its first-ever matchup against Alabama (4-3) and extending its win streak to four games.

This was also WKU’s ninth win over a Power 5 opponent since the start of the 2017-18 season.

According to a tweet after the game from college basketball insider Jon Rothstein and associate athletic director Zach Greenwell, the Hilltoppers were contractually given $10,000 for expenses to play Alabama.

Both teams started the game scrappy, WKU shot 2-6 and Alabama started out 1-6 at the first media timeout. The Hilltoppers were in early foul trouble as both senior guards, Taveion Hollingsworth and Kenny Cooper, picked up two fouls each within the first four minutes.

WKU became turnover happy with three turnovers in consecutive possessions, allowing the Crimson Tide to tie the game at 16.

Anytime the Hilltoppers would get any momentum, a turnover would occur allowing Alabama to keep the game close for most of the first half.

The last few minutes became chippy as the teams went back and forth battling for the lead, but multiple offensive rebounds for the Hilltoppers proved to be a difference.

The duo of Bassey and sophomore guard Jordan Rawls played the hero role scoring 13 and 11 respectively, of the 33 total points in the first half. Alabama was led by guard Jahvon Quinerly with nine points at the half.

“I’m just trying to be aggressive,” Rawls said. “Just make an impact wherever I am and tonight it just so happened to be getting to the foul line, making big shots and things like that.”

WKU led at the half 33-32 despite Hollingsworth, senior Josh Anderson, and freshman Dayvion Mcknight all being held scoreless.

“Rawls stepped up and scored for us,” Stansbury said. “For our guys to stay together, fight through some adversity, through some foul situations, your critical guys on the bench, that’s what makes it even more special.”

Both teams started the second half better than the first, shooting 50% or better by the first timeout. Hollingsworth had four of the nine points to start but picked up his fourth foul with 15:53 left in the half.

The tempo picked up as the teams traded baskets with the Tide beginning to knock its threes down but with the Hilltoppers creating turnovers, Bassey and Anderson took turns throwing down dunks.

Neither team could pull away from the other. A three from junior transfer Kevin Osawe put WKU up by five but a bucket by Herbert Jones followed by a three from John Petty tied the game at 59 with 7:42 left in regulation.

WKU found a little lead way going on an 8-3 run to take a 67-62 lead after multiple steals led to easy baskets from the fast breaks.

Free throws became big down the stretch as both teams would knock down many that would end tying the game at 71.

With 23 seconds left in the game, a goaltend gave WKU a 73-71 lead. Alabama took the ball down the court leading to a missed layup by Jones with 10 seconds left. The Hilltoppers tossed the ball around until time ran out, giving them the win.

“It’s a big win. We’re going to go back and watch film,” Bassey said. “Less turnovers next game and go back and get ready for Tennessee Tech. We have to continue to do what we do for every game.”

WKU will now play Tennessee Tech (0-8) next Tuesday. The two teams met last year with the Hilltoppers taking the win 76-64.

Four Hilltoppers reached double-digit scoring in that game last year with Bassey and Carson Williams leading the way with 16 points each. WKU shot 19-26 from the free-throw line compared to the Golden Eagles 4-6.

Tip-off for Tuesday’s game inside Diddle Arena is set for 6 p.m.