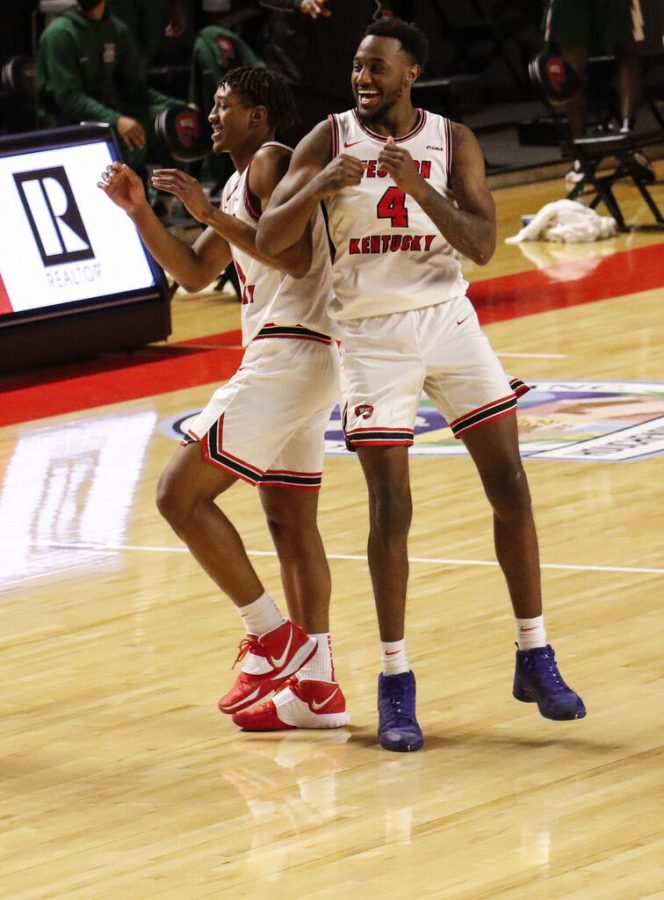 Senior guard Josh Anderson (4) shoulder bumping freshman guard Kylen Milton (1) in the 96-69 win over Mississippi Valley State on Dec. 6, 2020. This was the teams home opener for the 2020-21 regular season.

WKU (3-2) defeated the Mississippi Valley State Delta Devils (0-5) 96-69 in a contest that was dominated from start to finish even with inconsistent play at times.

“We had 21 offensive rebounds, that’s a plus, we had 21 assists, that’s a plus. We had a chance to play a lot of people, that’s always good. We haven’t had a game like that all year long,” head coach Rick Stansbury said.

WKU came out firing on all cylinders, shooting 4-5 to start the game and getting to the free-throw line seven times within the first five minutes, which was four less than its total against the University of Louisville.

The Delta Devils led for all of 17 seconds at the beginning of the game as the Hilltoppers had complete control from whistle to whistle.

Eight of the nine Hilltoppers that checked into the game and scored in the first half, with senior Taveion Hollingsworth leading all scorers with 12 points followed by junior Charles Bassey with nine.

Junior transfer Kevin Osawe made an impact scoring seven points with four rebounds as WKU took a 45-33 lead into halftime.

“I didn’t know I was gonna come and perform the way I did I just came out with energy like I do every game,” Osawe said postgame of his performance. “That’s what I love to do, I love to help the team in any way that I can.”

The only aspect of the game that kept MVS within 12 points was poor three-point shooting by WKU, going 4-17 while the Delta Devils went 8-20 from behind the arc.

The Hilltoppers came out in the second half, similar to the first, going 9-15 to start the half but only four of those were three-pointers with two going through the net.

The Delta Devils came out to play in the second half dropping 36 points and going 8-8 from the free-throw line but it wasn’t enough to overcome the first-half deficit and Hilltoppers roll of 51 points scored in the second half.

WKU controlled the boards for the whole game, outrebounding MVS 52-21 with a 21-2 advantage on the offensive side.

“I feel every night no matter who we play I feel that’s the mindset to out rebound the other team and that’s what we did today,” Osawe said. “I feel like moving forward we should always have that mindset, I guess we’ll be successful.”

As announced earlier today, WKU will take on Gardner-Webb inside Diddle Arena on Thursday. The Runnin’ Bulldogs have yet to play a game in the 2020 season as their early-season games have been postponed up until this point.

“We needed another game,” Stansbury said. “To be honest I don’t know a whole lot about them. Except that they have had a good program and they’ve had good teams.”

Last season, Gardner-Webb finished the season at .500 with a 16-16 record and lost in the semi-finals of the Hercules Tires Big South conference Tournament against Winthrop.